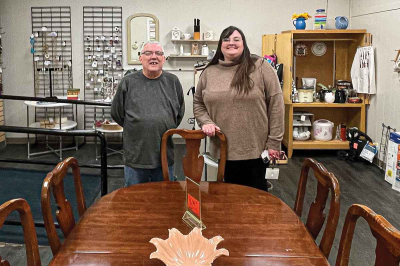 In the two months since the Mountain Projects resale store opened in Waynesville, it has already seen serious success in both the number of quality donations and customer traffic.

The store follows a similar store Mountain Projects has in Jackson County called Sylva Linings, which has been in business for about seven years. Brooke Smith, assistant executive director of Mountain Projects, said the people of Sylva Linings were essential to the successful opening of the new store.

“This could not have happened without the help of the people at the Sylva Linings,” said Smith.

The idea for the store had been floated for a while before actual work began to open just before Thanksgiving. While things may have started off slow, Smith said the store has gotten busy in the heart of the holiday season.

“At Christmas we kicked it into high gear,” she said.

The building, which used to house offices, was broken up into several rooms, each with its own section. The store offers a surprising selection of furniture and kitchen accessories at a wide range of values, including some high quality items. It also features everything from clothing and linen to books to sporting goods to jewelry and even wall art.

David Porter, who has been with Mountain Projects since March and is the acting store manager, said people are often surprised by the selection.

“We have a little bit of everything; you never know what you’re going to find,” he said, adding that the stream of donations that feeds that variety has been steady. “And the money made from the sale of these donated items goes back into the community.”

Here’s a look at one of the rooms at the Mountain Projects resale shop in Waynesville. There are several similar rooms, each with their own section. Kyle Perrotti photo

Pam Cunningham, who works at the cash register three to four days a week, agreed, noting that people are impressed with the variety and quality of items, as well as the prices. Cunningham, who recently retired after a 33-year career, said she loves to shop and that part of the fun of working at the store is seeing what kinds of items come in. But while Cunningham enjoys her part-time gig, she was quick to point out that contributing to Mountain Projects’ mission remains the thing that brings her the most joy.

“Mountain Projects is such an important organization,” she said. “If you have roots in Haywood or Jackson County, you know someone whose life has been improved by Mountain Projects.”

The store is open from Monday to Saturday from 10:00 to 16:00. Smaller donations can be dropped off directly at the store at 2177 Asheville Road in Waynesville. For larger donations, call Mountain Projects at 828.507.0837 to schedule a pickup.