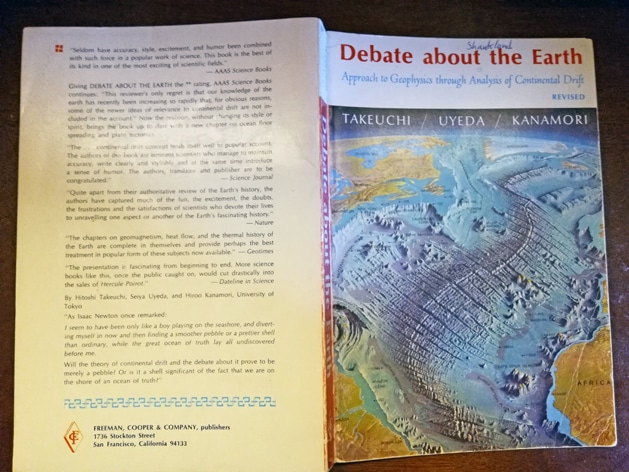 It was a shock to me that Dr. Tom Shankland left his last thoughts on the high-altitude atmosphere that circulates around the globe forever. More than 10 years ago, I spent time in the LANL physics building where Tom was. The office mate next door appeared in my memory.

In my personal library collection, there are some books I inherited from Tom when he handed out lifelong treasures to the corridor floor for “recycling.” Among them, “Discussion about the Earth” has become one of my best choices when my thoughts need refreshment.

As an atmospheric scientist, I am particularly interested in reading this book because of Alfred Wegener, a German meteorologist and pioneer in Arctic climate research. In China, children at all schools know a fascinating story about Wegener, who “accidentally” discovered the theory of continental drift while lying on a hospital bed looking at a world map of the wall. We know that Wegener had to quit his job of scientific discovery because of the outbreak of World War I. He had to join the army to fight the war and was injured twice during the war. He took advantage of his long sick leave to scrutinize what he discovered and improve the theory of continental drift. But as a geologist, I don’t know much about the interesting half-century discussion behind Weneger’s fascinating discovery story. It was Tom who introduced us to this fascinating world of geology.

In my precious memories, I enjoyed a conversation with Tom, who not only explored the field of scientific expertise as a geologist, but also had a deep vision for interdisciplinary research and the development of frontier science. One of the most talked-about topics we talked about was the detection of lithosphere-atmosphere-ionospheric coupling (LAIC) and related seismic precursors.

The precursory theory of the LAIC earthquake is also a topic that has been discussed since it was proposed in the mid-1960s. The debate over the continental migration theory was resolved by the discovery of evidence in deep-sea fossils and advances in theoretical models of Earth tectonics. Discussion of the precursory theory of LAIC earthquakes because there is no concrete theory to understand the mechanism of LAIC and there is no appropriate satellite data coverage on a spatial and temporal scale to detect seismic signals in high altitude atmospheres. Has continued for half a century. ..

During the two years that Tom and I were our neighbors’ officemates, the 2011 off the Pacific coast of Tohoku Earthquake heated up discussions about the precursory theory of the LAIC earthquake. I remember Tom forwarding me a related article that I found interesting to look at. He also introduced an email list for a group of interested scientists around the world to discuss this issue and exchange research and development on this subject.

At that time, most geologists were skeptical of the precursory theory of the LAIC earthquake. Tom remembers being surprised to see the movie I transferred. The film showed the propagation of seismic signals in the ionosphere, which had some precursory traces during the 2011 off the Pacific coast of Tohoku Earthquake. I remember hearing from Tom about his opinion as a geologist. He explained to me what his point was in terms of Earth’s electrical conductivity, and emphasized that he was skeptical but open-minded and wanted to see breakthroughs from various perspectives. did. I was impressed with his critical thinking and open mind to the scientific topics discussed.

In my precious memories, I also spend time with Tom for a curiosity that reflects the scientist’s genetic character and a pre-programmed sense of humor in the spirit of his scientific inspiration and discovery. I enjoyed the time.

I remember Tom’s room could be extremely cold when my office room got too hot on a stormy winter day, but as Tom technically defined ” It didn’t look like the facility manager was bothered to solve the “serious discrimination problem.” At one point, when we were joking about how to make a hole in the partition wall to mix air to solve the problem ourselves, Tom said that my office was a huge occupy most of the partition wall. I noticed that I had a world topographic map, and he pointed out that Mid-Atlantic Ridge suggested that a “deep sea drilling team” was needed to do the job. The final test of the continental migration theory was fossil evidence from a deep-sea drilling project, a joint international effort from the 1970s to the 1980s. See how Tom’s sense of humor was scientifically stimulated.

I remember one summer when a talented young artist, a high school student, came to a managerial position in our building. She used a corridor poster board for the mural. I was very happy to see the blank posters gradually build up the energetic clouds, rainbows, wildflowers, lovely little animals playing in the woods and streams, and the little hut of Uncle Tom overnight. Everyone in our building appreciated the fresh entertainment that summer students brought to us, but I don’t think anyone was close enough for Tom to get close to it.

Mural art was like a huge coloring page that was sometimes partially sketched by a young artist. The door to my office was directly opposite the poster board, and Tom often started adding colors here and there as he watched his progress. Tom was actually an artwork coordinator, if not a co-authored artist.

As Einstein said, “After achieving a certain level of technical skill, science and art tend to merge in aesthetics, plasticity, and form. The best scientists are always artists.” Tom is professionally such an advanced scientist, and in some composition a youth from a heart artist, both sharing the same unique qualities of curiosity in discovering a colorful world. doing.

The book “Discussion on the Earth” has become very special to me since that life event where I was given the opportunity to make a “coincidence” discovery of Weneger. When I woke up from the hospital bed in the darkest part of my life a few years ago, the first thing I noticed was a curtain with a landscape painting of the sea, the beach, and a bright morning sunrise instead of Wegener on the world map. did. I came to see it. I remembered Isaac Newton’s words.

“It’s as if the boy was playing on the beach and sometimes distracted himself to find pebbles and cleaner shells that were smoother than usual, but all the true oceans weren’t found before me. . “It immediately brightened my spirit.

This quote is quoted at the end of the book “Discussion about the Earth” inherited from Tom and is a must read every time you pick up a book.

While Tom was recovering in the hospital, Wegener should have been given the opportunity to discover new perspectives for challenging and wrapping the theory of continental drift, so Tom’s life stopped in a high-altitude atmosphere. I was really disappointed with the discussion about the precursory theory of the LAIC earthquake.

On the other hand, in the high-altitude atmosphere, Tom is a little fortunate to have welcomed Tom as a reliable detection satellite orbiting the Earth with the ultimate mission of monitoring the Earth in an all-weather environment all year round. did. What is his mission?

Perhaps Tom wanted to directly monitor the anomalous traces of the upper atmosphere so that seismic signals could be effectively obtained as a precursor to improving the ability of earthquakes to reduce the catastrophic damage caused around the world. rice field.

Tom probably wanted to personally communicate with Wegener, who built the first meteorological station in Greenland. Wegener gained insights to launch new equipment to launch balloons for high-altitude atmospheric observations and to collect data to combat the climate crisis. This is escalating at an unprecedented pace.

But perhaps in the name of a Los Alamos scientist, Dr. Tom Shankland wanted to keep an eye on Los Alamos with the full range and best of sight, and to prevent the following operations: To the massive destruction of the world he loved so much and devoted his life to a brighter future …