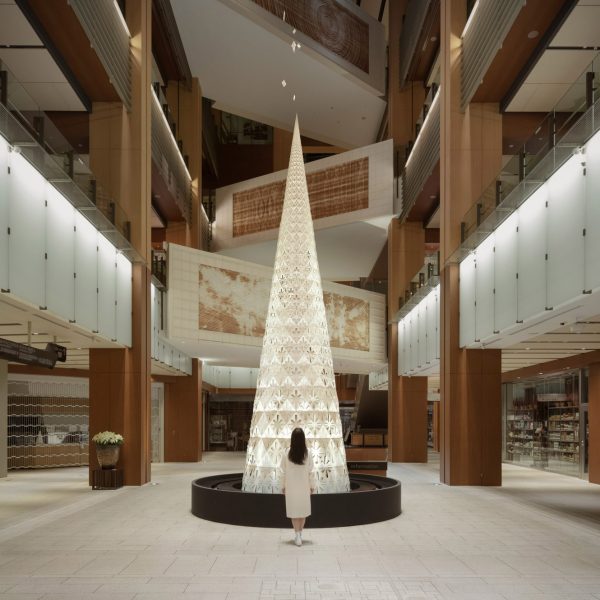 The 7.5 meter tall tree, which sits in the center of the mall, has a multi-layered surface made of flat metal panels bolted together to form a pyramid.

Behind the panels, which have fluttering star-shaped cutouts, sit 416 compact fans. It is programmed to move the panels in patterns up, down and across the tree.

“The pieces not only swing and move with the wind, but can also stop swinging in the air and catch the wind at the programmed timing,” Nendo said. “By constantly receiving a certain amount of air flow, the pieces also float upwards in a sustained manner.”

The pattern cutouts, which Nendo says look like “twinkle lights,” appear to revolve around the tree or create a rhythmic pattern that moves up and down the conical installation.

Matching cutouts in the same colour, described by Nendo as a “matte champagne gold”, were hung from the ceiling elsewhere in the mall. 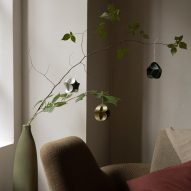 These pieces, which consist of both the cut-out stars and the squares from which they are cut, can be seen on Tokyo Midtown’s garden terrace as well as in its gallery and atrium terraces.

“The theme glitters in the sky translates the creation of the uplifting and glittering atmosphere, the essence of Christmas, by literally generating ‘glitters’ through ‘sky’,” Nendo said of the decorative ornaments.

Nendo, which creates both architecture and products, recently unveiled an archive to house its products and furniture made from prefabricated concrete box divers.

The studio also designed the Tokyo 2020 Olympic cauldron, which opened to reveal a hydrogen-powered Olympic flame, and was among seventeen designers who reimagined fashion house Dior’s Medallion chair for Milan Design Week 2021.

The photography is by Takumi Ota and the video is by Bird and insects.