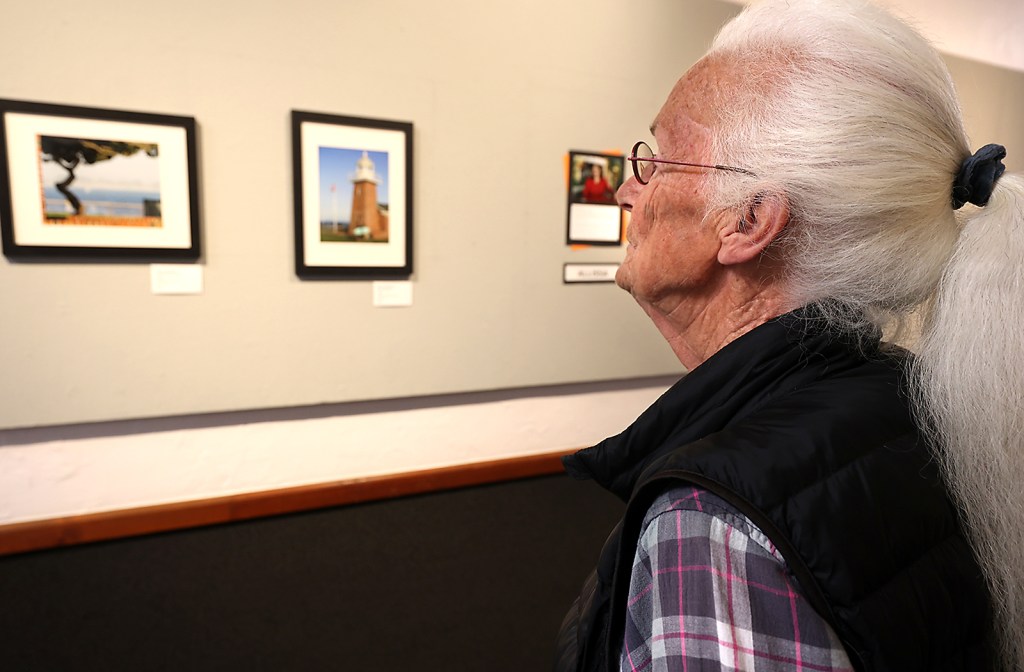 SANTA CRUZ – With a digital camera and all of Santa Cruz to choose from, Tiberious Duke said he quickly zeroed in on his favorite local scenery: the ocean.

The two 26-year-old men grabbed friend Will Penberthy for company and walked up and down the city for hours one day. At one point, their wanderings led Duke out deep on the Santa Cruz Small Craft Harbor wharf. He came back with a face full of sea water and a coveted photo.

“I was sitting really close waiting for a wave to come up and splash, a nice big one,” Duke said. “It was a really big one that came up and I managed it when it hit the rocks. And I also got wet in the process.”

This year, Duke and Penberthy were among the nine who took on the challenge by professional photographer Gina Orlando to explore their surroundings through the lenses of donated digital point-and-print cameras. The participants are all current or former members of the Downtown Streets Team, a program that recruits people experiencing homelessness to participate in volunteer street cleaning in exchange for supportive services and gift cards. Orlando first offered the group the services of her Beyond the Portrait venture’s philanthropic arm, Pictures That Give, in 2018.

After months of working with the photographers, Orlando was at London’s Nelson Community Center this week to set up the group’s show, titled “#changingperceptions: A Photography Exhibit.” Selected photos and photographer portraits and biographies will hang along the community center’s main hallway until August 28. The photographers and Orlando will also be on hand for a special First Friday debut, from 4-8 p.m. Friday. The photo exhibit ties in with the Downtown Streets Team’s five-year anniversary celebration, set for noon to 3 p.m., Aug. 11, at the London Nelson Community Center, 301 Center St., Santa Cruz.

A fellow photo challenge contestant was Genice Rush. Similar to Duke, Rush also said she appreciates the up-close-and-personal when it comes to her photography. Rush went out with a camera on a rainy spring afternoon and said that she “just put these lonely flowers to one side” that she knew she had to photograph.

“I had to try and figure out how I could get a picture of those flowers,” Rush said. “So, I’m way, way down on their level, like down on the ground. I’ve found that when you see something and it’s really beautiful…all you have to do is just get up.”

Out of their comfort zone

Looking back on his trip around the city with Duke, Penberthy estimated he took about 1,000 photos, an adventure that took the two men from the Santa Cruz Beach Boardwalk and Santa Cruz Municipal Wharf to the Circles neighborhood , to the UC Santa Cruz campus and through the Pogonip. He said his favorite shot was of a colorful array of cars parked for the Woodies on the Wharf showcase event.

“I really love old vehicles and the history behind them. Seeing them all lined up right there, it was kind of the perfect picture,” Penberthy said. “It was fun. And to have a friend like Ti (Tiberious) to be able to do it with, because I wouldn’t have done it unless I had someone with me.”

Mary Beeson, who studied art as a student, said she found herself frustrated by having a “machine” between her and her subjects. The 77-year-old former Downtown Streets team member said the group helped connect her to housing about a year ago, after staying close to the team since its 2017 launch in Santa Cruz. Over the years, Beeson has been lured by Orlando’s photo project but never participated in the latest round, she said.

During the golden hour at Lighthouse Point, Beeson took a shot of the lighthouse, seen over the arms of a Monterey pine, and with a small sailboat in the distance. The fiery red of the building’s bricks contrasted with the sea’s blue background.

“I found it was helpful in getting me back into making art, which I hadn’t done in a very long time,” Beeson said. “I told (Orlando) it keeps me focused. I noticed things that I can use and I judge what I do because I want to do something different than I have ever done before. I told her, it was very good for me that way, no matter how frustrated you get, Gina.”

What: #changingperceptions: A photography exhibition opening.