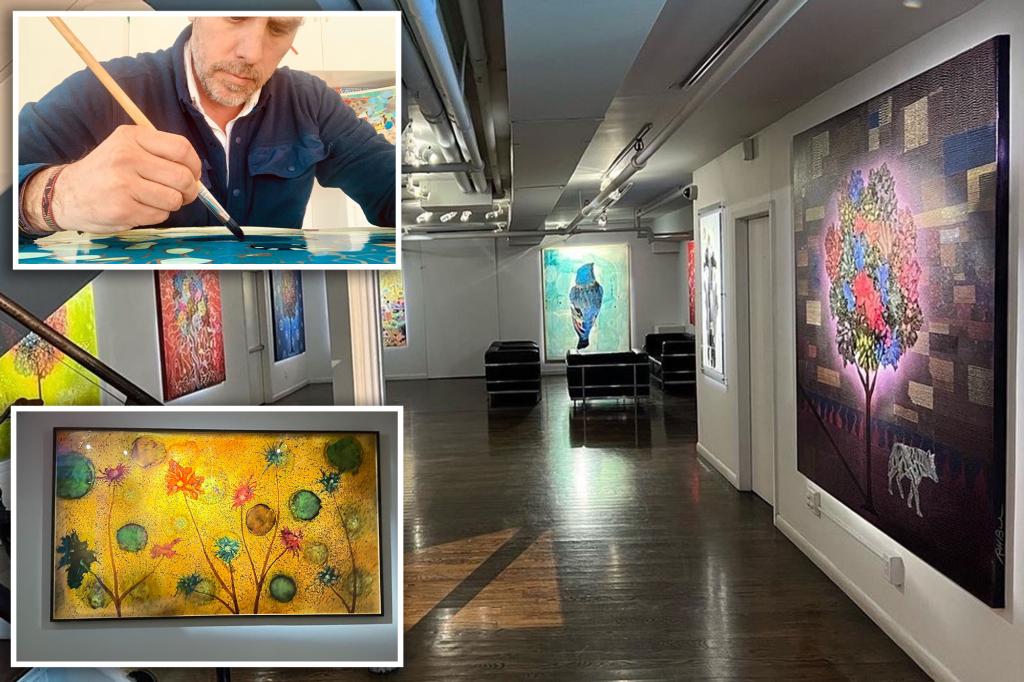 This Hunter Biden painting is selling for the price of a house.

The most expensive artwork at the first son’s new SoHo show is priced at $225,000 — and already has two interested buyers, The Post has learned.

A gallery worker on Saturday declined to give The Post details about the potential buyers of the untitled, 57×98 inch, mustard yellow flower painting on Yupo Japanese paper.

Unlike last year’s invitation-only debut of Biden’s artistic oeuvre, the new show, “Haiku,” is open to the public and features much stronger works, according to Biden’s gallery, Georges Berges.

“I want everyone to see his art,” Berges told The Post.

“The first [show] was successful,” said Berges. “We achieved what we wanted from that exhibition. This exhibition shows a stronger self-confidence.”

Berges declined to elaborate on which paintings were sold and who the buyers were. Paintings in last year’s show ranged from $75,000 for works on paper to $500,000 for large canvases.

The policy of not publicly naming buyers and what they pay has been highly controversial, with some critics saying it could lead to anonymous influence-peddling by the Bidens.

Berges told The Post that he has several paintings in the gallery’s basement that Biden completed more than 20 years ago — proof, he said, that he has worked most of his life to be an artist .

“He’s always been an artist,” Berges said. “The difference is where we are misunderstood that when he focused his whole life on art, they assumed that he just started doing art. But there’s a difference between painting on your own and saying ‘ok, that’s all I’m going to do and I’m just going to be an artist.’

Hunter, his wife Melissa and their toddler son Beau attended the opening of “Haiku” in an exclusive “friends and family” viewing on Thursday.

“I painted and washed. I painted it and washed it off,” Biden told a group of spectators Thursday night as he described how he created the layers and stains on a work in the series devoted to Japanese poetry.

Berges said the paintings were a form of “self-reflection” for Biden, who has been embroiled in an ongoing investigation into his financial dealings with Ukraine and China.

Berges said he is already attracting a lot of interest from Biden’s collectors.

“I think in many ways this show started off on a better note than the last one,” Berges told The Post on Friday. “Just the interest; he has a collector base of people who really like his work.”

The White House said measures were put in place to avoid any ethical concerns about potential buyers who might want to buy the work to curry favor with President Biden.

At last the Turner prize gets it. Artists improve with age | Martha Gill