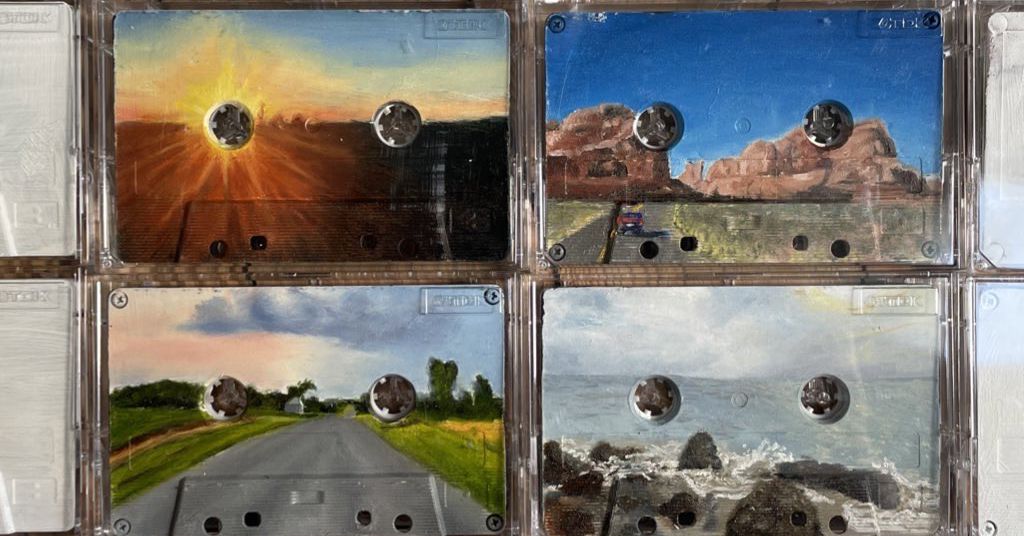 Summer has come. I am anxious for a good road trip.With the windows down, the sun shining across the horizon, Nicole Kidman’s music Practical magic.. This thirst is the idea behind my recent work “Road Trip”. Four cassette tapes containing eight miniature oil landscape paintings depicting a journey across the United States from the west coast to the east. Every my road trip adventure has playlists, and if you look at the pictures on each tape, you can hear the songs that were dating me on a long drive. Of course, it works the other way around. When you hear a song, you can go back to the I-80 and scout the skyline and sing along with half the words. The sense of memory and its movement to nostalgia is what I am trying to evoke with these tapes.

As a result of COVID, there were several cycles in which the plan was canceled, so I made several road trips to keep my wandering brain sane. Most of the reference photos used in the paintings were taken on a cross-country drive in the summer of 2021. I started painting other old technologies such as old cell phones and laptops. They feel like a little more fulfilling Polaroid photos and other memory tokens I have. I enjoy taking my cell phone with me and looking up and having fun in other situations such as the subway and parks. With proper preparation, you can paint almost any surface, from shells and rocks to glass soda jars and pickle jars. Finding objects to paint can easily be part of your vacation, and painting those objects when you get home is a great way to remember a good time.

Thanks to the professor’s responsibility to bring the rare “canvas” to class, I first came across the idea of ​​painting on cassette tapes. What I had to think about in the painting class was to return the paintings I made in class to the apartment in a wet state. Having moved around a lot as a kid, I’ve come to appreciate the mobile way of presenting art. Finding an object that came with its own case was really satisfying — even better than a see-through case.

When I started drawing cassette tapes, I was also trying out CD cases. I eventually decided that I liked the tape and its case better than the CD case because the art and the frame (or case) were separated, but I kept going back to the CD case I originally drew. It was an oil painting of a cloudy sky in a CD case entitled “SoundCloud”. I wanted to do more than just show the sky. I wanted to be immersive. I found it difficult to do that with such a small object, so the way around this is to add music.

Music has always been a big part of my art practice. The radio is always on in the studio, and many of my works have playlists I create for listening while I’m working. Some of the tapes I drew include recordings of playlists I listened to while working, but many of them were heard in Hall & Oates, U2, James Taylor, Tina Turner, and in the car. Another band that grew up. I was able to procure a lot of pre-recorded tapes from my neighbors in the local Buy Nothing group. I am excited to be able to handle recycled materials.

To paint such objects at home, use some paint brushes (# 1 round, # 3 rounds, # 5 rounds, # 6 flats), Gesso or Mod Podge, acrylic paint, some cardboard or paper. You need to mix the paint using a plate of, and a few glasses of water for rinsing. First, apply some thin layers of gesso or mod podge to the object with a flat brush and prime it. This will cause the paint to stick to the object and prevent it from peeling off. This step can be done at any time before painting, so if you’re doing this craft with your kids, you can avoid tedious drying times by priming the object the night before. Before drawing a picture, easily sketch the object with a pencil or pen to avoid distorted pictures. I use oil paints, but I don’t recommend them for casual crafts. It is very annoying and requires the use of toxic solvents. Acrylic paints are much cheaper, easier to use and easier to clean. It dries quickly and can be cleaned with soap and water.