Mary Kay Mitchell doesn’t care if people walk around in her art—indeed, it fits the realm of the Redwood City resident, who turned into an artist known as ChalkGranny in the midst of the Covid pandemic. As a work-from-home law firm receptionist, she was bored early in the pandemic, picking up her grandson’s chalk one day to decorate the sidewalk in front of her Anamor Street home. “I did a couple of ‘Hold On’ and ‘Cheer Up,’ and then I did a heart with a rainbow and it said, ‘When this is all over, what will you remember?'” Mitchell asked herself the same question, and then finally provides the answer in her new capacity as a chalk artist. Along the way, she’s earned some local notoriety thanks to a steady stream of projects and commissions she’s completed — from sidewalk birthday “cards” to elaborate chalk mini-murals. No matter what she does, the joking and outgoing Mitchell says, “It has to make me laugh.”

Initially, she worked in front of her home, creating yoga poses with chalk; a parade at the July 4th (cancelled) event with spinners, shrines, and band musicians; the solar system; and even a hopscotch board. She sets up stones so people can play and is excited to see grandparents teach their grandchildren what hopscotch is. Her husband, Marcos Domingos, would sit in front of the house and chat with neighbors while she was working. Requests for “chalk” began to appear as people began to notice her creations and appear on social media. Her website chalkgranny.com shows multiple examples and answers key questions – like how much does it cost? She charges $50 an hour, and ChalkGranny says most programs cost $50 to $100. She was commissioned to create a large and intricate Chinese New Year chalk for Orion School’s Mandarin Immersion School, featuring a ferocious water tiger and some deliberate application of Chinese calligraphy. The cost of that artwork is $200. Mitchell said most of the money she makes is spent on chalk and then donated to the Second Harvest Food Bank.

This story appears in the March issue of Climate Magazine.

“Every piece I do involves research, a lot of research,” said Mitchell, who stood on a school wall in late January studying the tiger she was making. “I dig deep and learn new things. Each piece gives me some insight into the culture.” School principal Katherine Rivera sent Mitchell a warm thank you Letter, Thank You Chalk debuted in February. “It highlights our school-wide focus on celebrating the culture and language that this school and Redwood City represent.”

Mitchell trained in the arts at Nazareth College in New York State and has an eclectic work experience. She taught art, but also water aerobics (for the YMCA), worked as a waiter, and then as an event planner. She worked for 25 years at the San Francisco Chronicle, where Mitchell managed the annual sharing fund. She is currently employed by the law firm of O’Donnell & Associates in Menlo Park as a receptionist and notary public. “I love my job,” she said. “But this” – referring to her chalk – “is my own business.”

When she started chalking, she used Crayola chalk from her 5-year-old grandson, Gideon Mitchell. But Mitchell went online and found Timeless Art Chalk, made by a Michigan snowplow driver who is a “gospel chalk” and teaches people how to use chalk to draw scenes from the Bible. “I just want to say,” Mitchell declared, “that this is God’s chalk. Nothing (other) is so good.” When she creates a piece, she uses white and black at the end. She rubs the chalk in with a sponge or gloved finger. (You can’t wipe off the chalk.) After teaching yoga and water aerobics, Mitchell says she’s in such good shape that she can spend two or three hours on a piece at a time, but “I never get down on my knees. If I get down on my knees, I’ll never get up. Ever.” She wasn’t worried that the rain might wash away her chalks, or that they weren’t permanent. Far from it: “It’s better for me,” she said. “I’m a real self-critic. If I don’t like it, I’m really glad it’s gone.”

Ironically, Mitchell observes, this is a global pandemic, prompting her and many others to try to connect with their neighbors and share some fun. “People have discovered wonderful new ways to involve themselves in their lives. Lucky people. Not everyone has the money to do it.” As the pandemic appears to be winding down, if her chalk days are over, Mi Chell won’t worry either, as she has plenty of other creative outlets, including embroidery and making socks. She might even enjoy teaching chalk strokes. “Anyone can do it,” she said. “It’s something you can’t take yourself too seriously. Because it’s chalk. It’s going to go away. Like Covid-19. It’s going to go away, hopefully.” Then added, “A good analogy.” 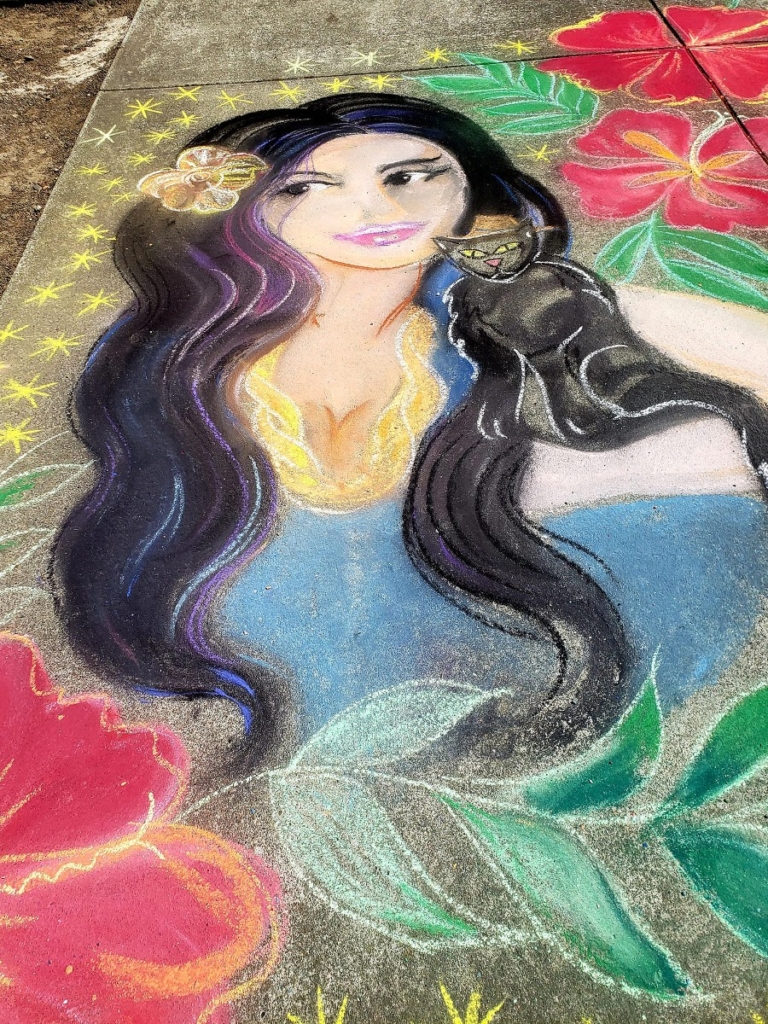 ‘Parks’ is a snapshot of renowned photographer and visionary who grew up in St. Paul – Twin Cities