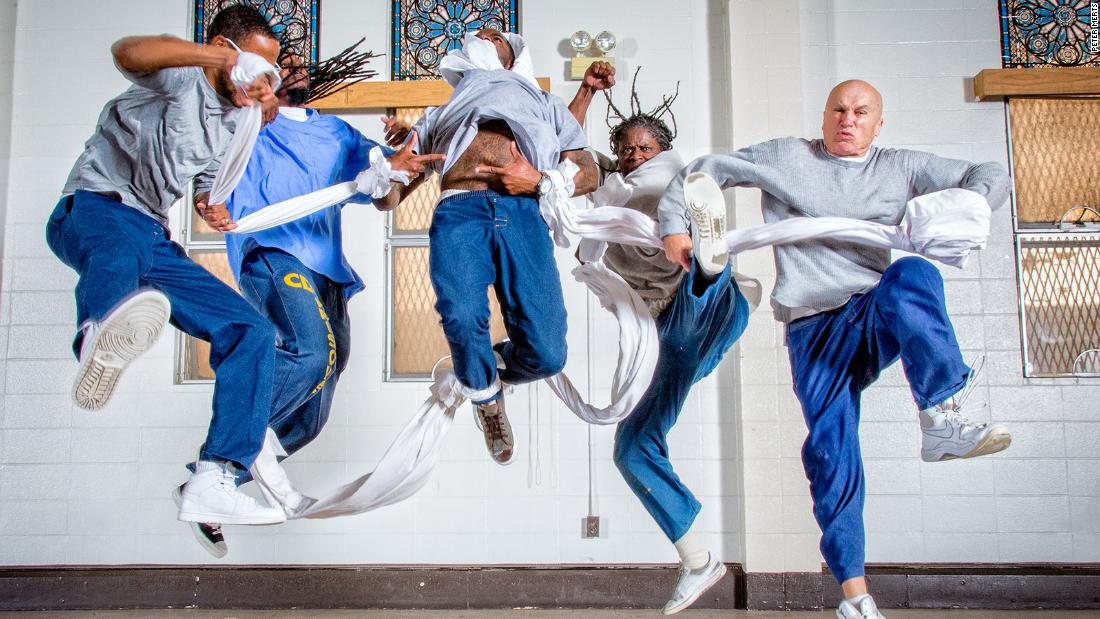 In photographer Peter Merts’ images of California’s Arts in Corrections program, a smiling man is depicted holding an acrylic portrait of Pope Francis. It’s a fitting choice of subject in a photo series that explores rehabilitation and redemption in America’s prison system.

Even before the California Institution for Men established an art program, the 54-year-old, who is not named in Merts’ new book, began teaching himself to paint using only the few books and supplies he had access to. When the prison ran an art class, he enrolled.

His skills advanced to the point where he became an “inside facilitator”, helping the instructors deliver classes and mentoring fellow students. After serving time for murder, he was released from prison and immediately hired by the same teaching program he assisted. He still creates art and teaches painting to anyone who is interested.

The man is one of many subjects featured in Merts’ book, “Ex Crucible: The Passion of Incarcerated Artists,” which showcases people who participate in prison arts programs that span creative disciplines, including music, writing, visual arts, dance and theater. Merts conceived the project in early 2021, but he has been documenting these programs for 15 years.

Across dozens of photographs, he offers an emotional portrayal of an often maligned population. In some images, Merts focuses on an individual performer’s facial expressions as they contort their features during theater classes or immerse themselves in a music lesson. Sometimes close-up portraits do not contain any artwork at all, but instead focus on a single person’s face against a white or gray background.

Other times, the photographs focus on the art itself, capturing intricate origami models, dynamic acrylic paintings and careful pencil sketches. However, the artist’s hands are always present in these images, drawing the viewer closer to the creative process as subjects play the piano, place their fingers on guitar strings or flip through art textbooks.

A student plays the piano during a songwriting class at the California Correctional Institution. Credit: Pieter Merts

Merts said when he started the project, he wanted to be an objective observer.

“At first I wanted to be unattached, a fly on the wall, just because it was remarkable to me,” he said in a video call. “But now I follow the emotional energy in the room. If someone is excited, I go there — if someone is confused, I go there. You can really see the courage and the passion in the people.”

“We all get nervous about self-disclosure,” Merts added. “But the artists are starting to see that they can open up and examine themselves and their lives. And when they do that, they become very authentic.”

The photographer said art helps people expose who they are, adding that he is fascinated by observing what subjects the imprisoned artists are drawn to. “Sometimes it’s family, and they draw portraits,” he said. “Sometimes it’s their culture or heritage, and their paintings contain cultural iconography.”

Merts’ favorite reactions to his work are from people who say it has radically changed the way they think about those in prison.

“By showing humanity and authenticity, originality and personality, you create empathy,” he said. “I hope that what happens here is a path where we can advocate for victims without stripping the perpetrator of their humanity.”

Prison art programs, like those depicted in Merts’ work, have the power to dramatically improve the quality of life for those inside correctional facilities, according to Larry Brewster, a University of San Francisco professor emeritus who specializes in public policy.

Ten years ago, he and Merts collaborated on another book, “Paths of Discovery: Art Practice and Its Impact in California Prisons,” which combined the latter’s photography with inmate interviews.

Merts and Brewster say that, at a policy level, the lives of prisoners are often dismissed or de-prioritized in favor of focusing on recidivism rates. But, they argue, a supportive prison environment can have positive outcomes on people’s lives once they leave the system.

Brewster has spent decades analyzing the effect of presenting arts initiatives in prisons and has noted a number of benefits for participants.

“What I found to be statistically significant, quantitatively, was better time management skills, greater emotional control and confidence, and an increase in motivation to pursue other educational and vocational programs,” he said.

In a theater class at Ironwood State Prison, students perform in the commedia dell’arte style, which was popular throughout Europe in the 16th to 18th centuries. Credit: Pieter Merts

According to the California Arts Council, the state’s Department of Corrections and Rehabilitation invests $8 million a year in its prison art program. Nine years ago, it invested just $2.5 million annually. Experts argue that funding and political support for prison education programs is critical to people’s rehabilitation — and it’s not limited to the visual arts.
A 2021 study published by the Academy of Criminal Justice Sciences examined the Bard Prison Initiative, which offers college degrees in a variety of liberal arts to inmates in six New York state correctional facilities. Researchers found that participants had a significantly lower recidivism rate than the general prison population, with those who earned a degree through the program less than half as likely to reoffend (and those who earned a full Bachelor of Arts degree nearly seven times less likely to do so ).

Brewster said his sample size was too small to make similar statements about recidivism in California’s prison arts programs specifically. But he found that participation resulted in significantly fewer disciplinary violations within the prison.

“People tell me how much safer they feel in the classrooms than when they’re in the yard,” Brewster said.

Meanwhile, Merts has heard that inmates refer to the art classrooms as “sanctuaries.”

According to a 2016 survey by the Bureau of Justice Statistics, the average person in state prison has only a 10th-grade education. Incarceration is inextricably linked to systems of poverty that disproportionately affect people of color, especially black communities in the United States. Proponents of prison education programs believe they can help address that systemic neglect by providing opportunities for socioeconomic mobility after release.

A view of Susanville, California, which is home to the High Desert State Prison and California Correctional Institution. Credit: Pieter Merts

Not just a number

According to the Justice Arts Coalition, 48 states offer some type of prison arts programs, although access varies widely.

Across the country in a state prison in Georgia, Noe Martinez was not offered an art program while incarcerated from 2010 to 2020.

“In fact, we had to get special permission from the warden to send something as simple as crayons or colored pencils into the prison through our families – and this was not always approved,” he said.

Instead, he made paint out of anything he could find, including candy, Kool-Aid powder, and hair gel. Looking at his old artwork during a video interview, Martinez deciphers that one watercolor must have been done in the fall, as the blue and purple hues would come in the background of Jolly Ranchers he received at Halloween.

“Ophelia Drowning,” a watercolor painting created by Noe Martinez during his incarceration. Martinez took a Shakespeare course while in prison, and this artwork was inspired by a character from “Hamlet.” Credit: No Martinez

Martinez, who was in prison for armed robbery and aggravated assault, grew up in what he describes as “a pretty trashy neighborhood” in Chicago and began his artistic journey with graffiti.

“So often we’re just written off as statistics, or bullet points on someone’s checklist of reasons why this neighborhood sucks, or why it needs gentrification,” he said. “Illegal art, for me, has always been a way to announce to the world that I’m somebody, that I’m an existing person. Because statistics and score marks can’t write on a wall – it’s a human.”

The sense of dehumanization only intensified once Martinez was incarcerated. “You lose your identity, you lose your name. You effectively become a prison number.”

While in prison, he often returned to graffiti, even creating stickers with graffiti patterns and plastering them around the facility. He said he also created pieces representing different parts of Chicago “because I was so homesick.” More than two years after his release, Martinez is still painting graffiti on canvas.

Martinez’s experience seems to confirm Merts and Brewster’s belief that art can provide a safe space. “I can only speak for myself, but art provides a brief moment to step out of the prison environment and culture and do something that you found entertaining as a child,” Martinez said. “It gives you a moment where you’re small again, maybe before you made some bad choices.”

“I always felt art had a redemptive value in it,” he added. “It takes the nasty stuff out of you, the anger out of you.”

Brewster said he has heard these sentiments time and time again among current and former inmates.

“We are dealing with people who (within themselves) offer room for mistakes, but also goodness,” he said. “Peter (Merts)’s work invites outsiders to come in and observe. Suddenly people see the prisoners through a different lens. They don’t see them as a number, but as a visual artist,” a musician or a writer.”

Merts says many of the imprisoned artists he has observed over the years have found redemption and community through art. He wants to see more support for prison art programs and believes photography is a powerful medium through which public opinion can be shaped.

“I thought there was an opportunity here to reach people in a different, visual, non-textual way,” he said. “It tends to be a more emotional channel for people.”