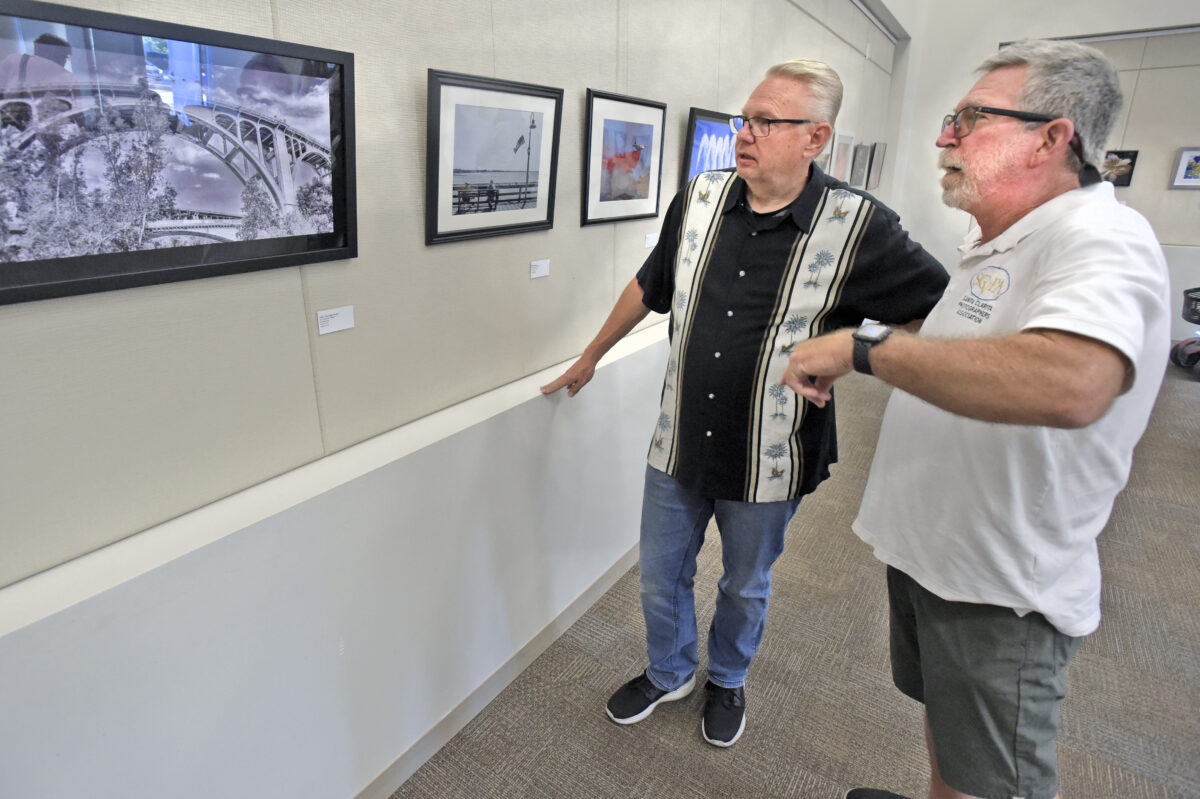 After spending 30 years in accounting, Mel Carll was burned out. One day he decided to just quit and commit to what made him happy: photography. Ten years ago, Carll opened a studio in Santa Clarita and never looked back.

Carll’s work was among 20 pieces displayed Saturday at the Santa Clarita Photographers Association’s display of winning photos at the Old Town Newhall Library. The exhibit and reception featured photographs that won the association’s November and May image contests.

“I’ve always done photography since I was a kid and I’ve always enjoyed it,” Carll said. “I just burned out in the accounting world and then one day just said, ‘I quit,’ and opened a studio here in Santa Clarita, and I’ve been doing it ever since.

Much of Carll’s work is nature or landscape photography, digitally manipulated to enhance colors and printed on metal plates to emphasize contrasts. One of his works titled “Evening Walk” shows elephants in Botswana foraging along the savannah. The image sat next to a close-up of a lion titled “On the Prowl”, taken in South Africa.

Carll said the experience of photographing wildlife in Africa prompted him to return soon for more shots.

Sydney Adam, Art and Exhibition Assistant for the City of Santa Clarita, said these types of events are not only a great way for artists to display their work, but also an important way for the city to make the community aware that impressive works done by local residents.

“The city thinks that it’s very important to have these collaborations with local nonprofits to create some kind of community cohesion and support our creative members of the community,” Adams said. “So it gives us an opportunity in a space for the members, and then outside members to also kind of get awareness of these organizations.”

Like Carll, Kevin Karzin went through a career change before returning to photography. Karzin worked as a photojournalist for The Signal and the Associated Press before switching careers to work as a lineman for a telephone company. But after an injury on the job, Karzin rediscovered his passion. Karzin’s work focused on profile pictures of interesting characters, such as a man in mid-performance at a renaissance fair.

“So it was at the Renaissance Faire, this past year at Irwindale,” Karzin said. “And he did a performance for the queen. They [were] just very animated.”

Karzin now serves as the president of the Society of Photographers and said it was great to see his peers’ art.

“I love it. I mean, that’s one of the things we’re trying to do throughout Santa Clarita — is get our artwork out there.”

Another competition-winning photographer, Andrew Lewis, said he was always drawn to fires. During a fire that occurred at the northern end of Acton, Lewis was able to intercept a firefighting aircraft dropping fire retardant. The piece is titled “On Target.”

“I’ve always been kind of a fire-watching enthusiast. My father and I would go out and watch the fires come in [our] area,” Lewis said. “I heard about this right around the corner from my house … I had no excuse not to go. I was in a very good position where I was removed from the fire, I was out of the way, I was at a good level and could shoot straight at it. Just right place, right time, with the sun behind me. Just worked out.”

Whether it was a career change or a lifelong passion, these photographers saw their work as art and took pride in it. As winners of the association’s contests, these photos are among the best in Santa Clarita. Carll said that if you have a passion, there is no reason to put it off.

“Find something you love and do it. Don’t wait,” says Carll. “I mean, I waited a long time before I started doing it really seriously… Don’t wait. That’s the biggest thing. Don’t wait.”

The Santa Clarita Photographers Association’s contest winning photos will be on display at the Old Town Newhall Library through October 17th.