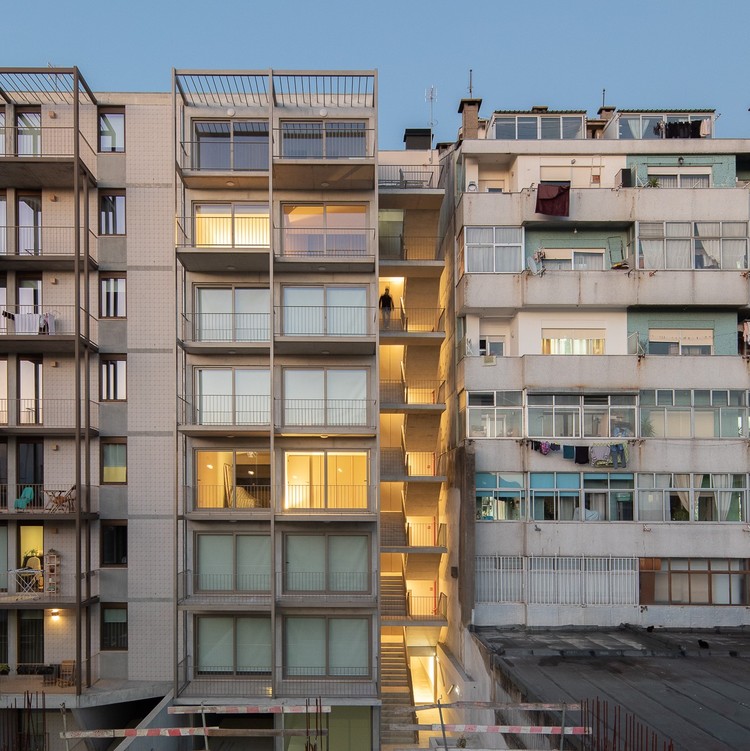 A description of the text provided by the architect. Located at the eastern end of the city of Porto, Ruadepinto Bessa was planned at the end of the 19th century as a structural road connecting the integrated city with Kampanhan, the city’s new main railway station. Due to its importance, its generous profile eagerly aspired for two front-height structures and densification. This residential block is intended to meet the city’s intent. It occupies a parcel of remarkable land on the street, extends along the entire length of the parcel, takes advantage of the height defined by the visible buildings, and creates a new façade metric that respects the vertical proportions of the surrounding buildings.

The building has a rough and honest design that emphasizes its unique structure, interleaved with glass plates aimed at maximizing the ingress of light and expanding the potential for internal occupancy. At the limit, it is mainly the bones of the building that are designed, and it can be considered that the internal layout (changeable) is proposed. The façade responds to exposure to the surroundings and the sun. Facing the northern Luadepinto Bessa, there is an exposed concrete structural grid resting on a softened concrete base. The final floor assumes exceptions and transitions between adjacent buildings. On the south side (facing the courtyard), large glass windows that allow access to sunlight are juxtaposed with metal structures that join guardrails of various depths. These grids generously extend the living space outwards, maximize the capture of the sun in the outdoor area, and create expressive play that controls the exposure of the interior space to the sun.