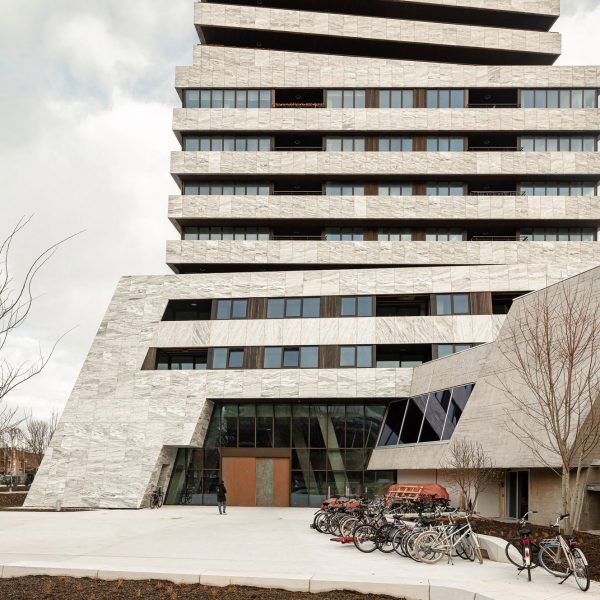 The 100 meter high Bunker Tower was designed by Powerhouse Company from natural stone and has 210 apartments on its 32 floors.

Its stepped form tapers as the tower rises, in a nod to the asymmetrical Bunker building, and features wood detailing and glass panes that widen at the top.

The Bunker Tower is designed in a slightly twisted form with three distinct sections, on which the stone, glass and wood panels are placed in a “lively rhythm” of horizontal bands.“The building reveals so many sides, different vignettes, depending on where you are in the city,” said Powerhouse Company project architect Meagan Kerr.

“And each apartment has different views, despite the repeated floor plan.”

At its base, the new tower joins the original Bunker building, which was renovated as part of the project and will house 3,000 square meters of office space for online education provider Goodhabitz, as well as the partially public Grand Cafe.

Designed by Dutch architect Hugh Maskaant in 1969, the concrete bunker building was originally used as the student union of the Technical University of Eindhoven, but fell into disrepair.

Over eight months, contractors Van Wijnen restored the old Bunker’s original concrete to get it in the right shade to match the extension, which was designed with a material palette that would harmonize with the existing building.

“If you drive down Kennedy Avenue, you can see the Bunker Tower from afar; come closer, and you see Maaskant’s bunker,” said Nanne de Ru, co-founder of Powerhouse Company. 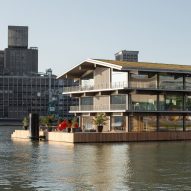 “Our design mixes different scales, old and new,” he added. “It’s a monumental yet sensitive intervention – like a friendly giant.”

The extension also offers underground parking, which enabled the studio to transform an existing parking space into a public park by Delva Landscape Architecture & Urbanism.

Called Bunker Park, it was designed with native plants.

“With the Bunker Tower and the accompanying park, we show that it is possible to significantly green a downtown location and make it climate-adaptable, while also responding to the major housing challenges,” says Steven Delva, founder of Delva Landscape Architecture. & Urbanism.

Powerhouse Company was selected for the Bunker renovation and expansion after winning a 2016 competition by the University of Eindhoven to decide the future of the building.

The residential tower, completed by Powerhouse Company for developers RED Company and Being Development, generated the income needed to finance the restoration of the original bunker.

Other projects recently completed by Powerhouse Company include a floating office in Rotterdam and a Corten steel broadcasting tower in Turkey.