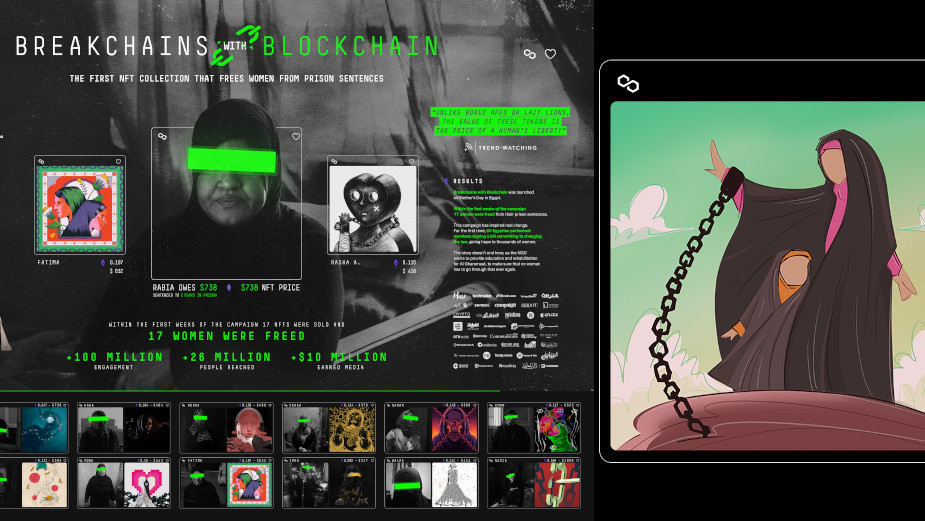 Selling digital art as an NFT has freed women from Egyptian prisons and reunited them with their families.

In Egypt, under Article 341, default on a loan is a criminal offense with imprisonment.

For this reason, tens of thousands of women are sent to prison each year on small loans to care for their families. They are known as Al Gharemaat, or “The Finned”.

This is a major national problem that leads to family tears, and these women have been imprisoned for very long sentences or forced to flee to escape imprisonment.

Laws need to be changed to protect these women. To that end, it is necessary to raise awareness not only locally but also globally.

This project was one of logistics. We first needed to connect with a real Egyptian woman who was in jail or was sentenced to go to jail. Through the NGO “Children of the Women’s Prisoners Association”, we were able to discover their story and share it with artists around the world.

Later, these artists created digital art, recreated it as an NFT, and released it on Blockchain. Through social media and public relations campaigns, we communicated the plight of Algare Mart to the world.

Every year in Egypt there are traditional donation campaigns to Algare Mart, but these are very local and not very noisy. I wanted to create a loud screaming campaign to convey the plight of Al Gallemart to the world.

NFTs are the most trending topic today and where people are willing to spend a lot of money. I wanted to use it as a new medium to raise awareness and change women’s lives for hundreds of dollars.

The story of Al Gharemaat is raw, realistic and must be treated with caution. We were able to work with a truly talented artist. They were able to turn this pain into something beautiful, emotional and, more importantly, persuasive. Because people are visual, we needed a high-profile visual that instantly conveys all these emotions. What were the most interesting conversations and challenges that emerged at this stage? (May be technical, can be emotional and aesthetic … really what was this oyster grit !?)

Every day we spend crafting is another day that women are afraid of, so there was a real sense of urgency when it came to creating NFTs. That’s why we partnered with internationally talented artists. They shared our passion and were motivated to create inspiring works of art in a shorter timeline. And what talents / collaborators / specialties needed to reach out and cooperate at this stage? And what did they bring to the mix?

This campaign was a very supportive and international process. All artists came from different countries, so it was important to make sure they really understood the cultural influence of the Al Gallemart topic. We also needed to work closely with Egyptian NGOs to come up with creative solutions to the cryptocurrency problem. This was a challenge as it is still relatively unknown in Egypt. We also worked closely with the ground photography crew. They worked very hard on that goal, traveling to dangerous areas of Cairo, filming and telling their story to the world in an interview with Algare Mart.

At every stage, everyone we worked with had an absolute dedication not only to bring a unique perspective, but also to ensure that these women were released from the chains. ..

Since NFTs are still a relatively new technology, we had our own NFT experts who helped us navigate the complex world of cryptocurrencies and blockchains. From creating NFTs to “ether packaging”, everything was a whole new way to sell products for us. There was some trial and error, and there were many late nights.

Since we had to test the NFT platform, this would allow the team to launch several practice NFTs and sell them to each other to get a clear understanding of how the platform works. Was included. This was especially important as purchasing methods and NFTs were an important part of communicating with the general public.

For me, it was incredibly humble to see people from all over the world come together for a common purpose. Without this kind of heartfelt cooperation, we wouldn’t know if we were so successful. It is a testament to the fact that people really want to help those who are suffering.

The project has brought new attention to the issue of Al Gallemart in Egypt, not only in this region but around the world. Children of the Women’s Prisoners Association could use this campaign as a platform for submitting reform bills to the Egyptian Parliament, where they were able to get 60 signatures to agree to the law amendment. An important first step to really get rid of this problem from Egypt.