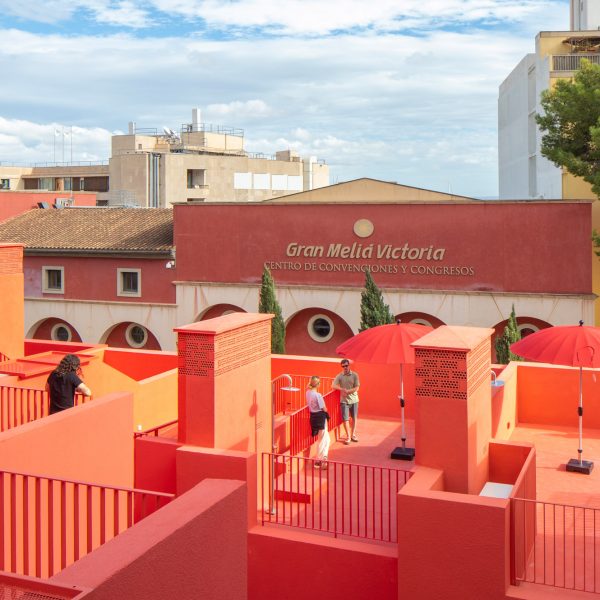 A colorful collection of buildings in Palma de Mallorca were designed by architecture studios MVRDV and GRAS Reynés Arquitectos to echo the playful style of Camper shoes.

The architecture studios were commissioned by the Fluxà family, owners of Mallorca-based brand Camper, to add seven mixed-use buildings around a plaza in the southwest of the Balearic island city.

The ambition is to rejuvenate the El Terreno neighborhood, but also to create a recognizable identity that reflects the Camper ethos of “combining heritage with innovation and creativity”.

Five of the seven buildings are now complete, with distinctive details including staggered terraces, colored facades and bricks made from compacted earth.

“Project Gomila is an exciting architectural project – each of the seven buildings can stand alone as its own individual design, and yet at the same time they are also carefully considered as an ensemble that gives Gomila a new boost,” MVRDV co-founder said. Jacob van Rijs.

“When you look together, you see a colorful collection of buildings that still somehow work together as a group,” he said.

Centered around Plaza Gomila, the buildings include a renovated 1970s building renamed the Gomila Center.

This bright white building contains a restaurant, office units and apartments and is characterized by its complex shape. The ground floor spaces are organized around a spacious courtyard, while the upper levels open onto several balcony terraces.

Next door is Las Casitas, a triangular block of eight townhouses painted the same red as the Camper logo.

Matching red details are in every home. Residents also have their own roof terraces, making it easy for them to socialize with their neighbors. 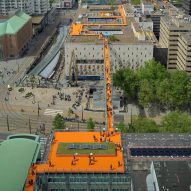 Another block of flats, called Las Fabri-Casas, has a contrasting facade of blue ceramic tiles.

It is located on a corner and has a sawtooth roof that neatly divides the block into eight sections.

Las Fabri-Casas adjoins a building made of compressed earth bricks – an apartment block with a rooftop swimming pool that offers residents views of the nearby Bellver Castle.

Nearby is the green-hued La Plaza, a renovated building that now houses offices, a public rooftop terrace and a reimagined version of the neighborhood’s historic Bellver bar.

“As far as urbanism is concerned, the concept revolves around the diversity of the buildings,” said Winy Maas, co-founder of MVRDV.

“This diversity of people and spaces will help bring back El Terreno’s lost vitality.”

El Terreno was a hotspot for nightlife in the 1960s and 70s when it hosted performances by musicians such as Jimi Hendrix, Ray Charles and Tom Jones.

Two existing buildings will also be transformed as part of Project Gomila.

One will become the bright yellow Casa Virginia, while the other will become a luxury villa.

“The Gomila project activates a new centrality in Palma, a new meeting and reference point not only for the people in the neighborhood, but for all the citizens,” said GRAS Reynés founder Guillermo Reynés.

“The project was very well received and brought back fond memories that Palmesanos had of the area.”

All seven buildings are designed according to Passivhaus principles, with low energy consumption, thermal efficiency and climate control.

Their roofs are covered with solar panels to generate clean energy, while heat recovery systems and cross ventilation help reduce their energy demand.

Project Gomila is not the first collaboration between MVRDV and GRAS Reynés – the two firms previously teamed up to design a carbon neutral city in La Rioja, Spain.

The photography is by Daria Scagliola.

Legendary Photographer Guy Bourdin’s Work Is Getting A Web3 Reboot

All things niche and natural