Public art flourishes throughout the region in 2022 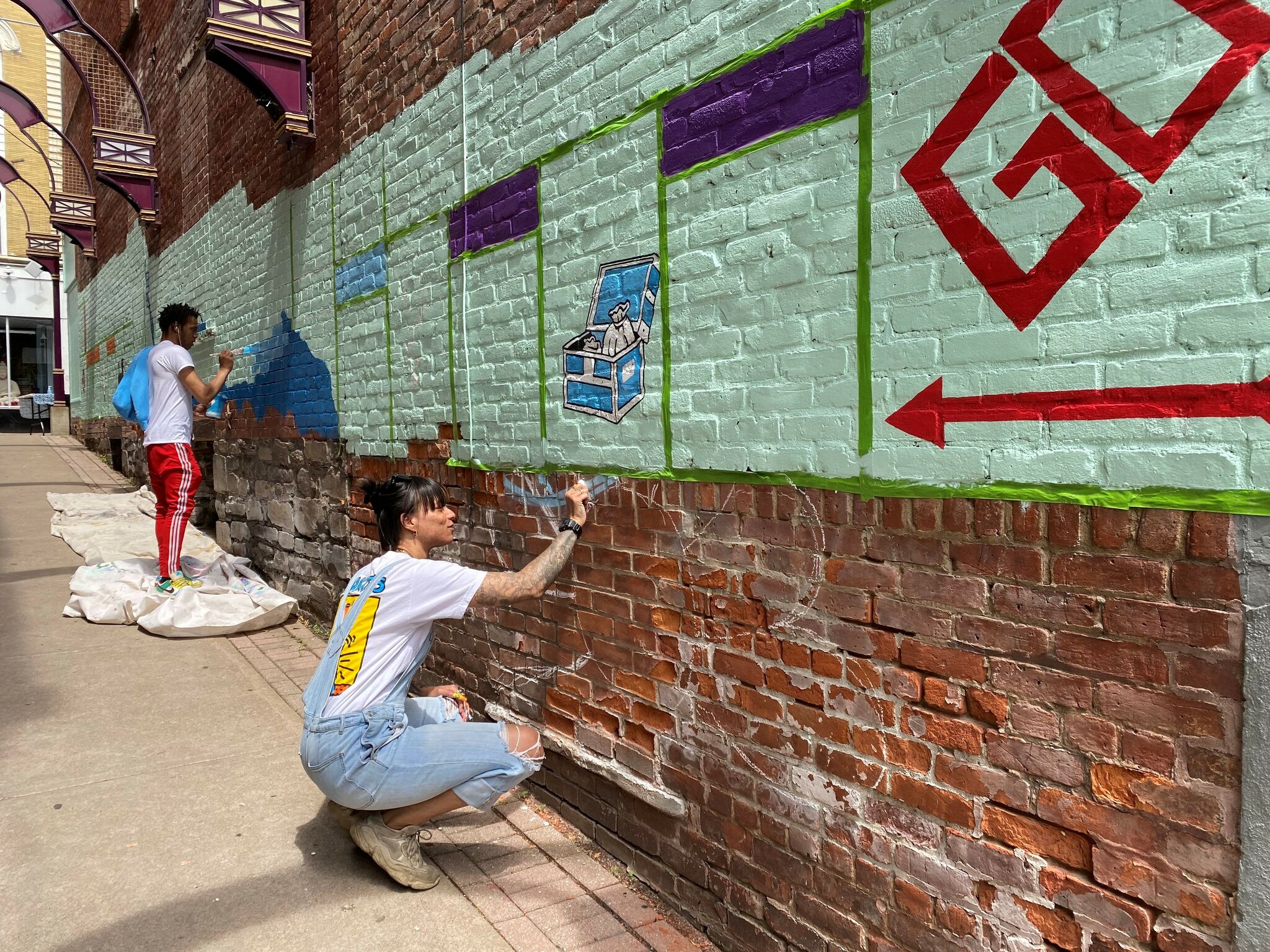 As recently as a few years ago, an empty space or cinder block facade in a capital region was just that. But the conversion of these concrete walls and underpasses into works of art accelerated, quickly transforming urban landscapes into public galleries filled with vivid murals, sculptures and light displays.

While the pace has been uneven between local cities, the momentum behind public art is gaining ground.

This year, Albany got two new murals through Capital Walls, started by the Parking Authority, Albany Barn and Albany Center Gallery in 2016. The Art Center of the Capital Region sponsored a new mural next to School 2 and two temporary works, #HopeSpringsEternalTroy and Troy Glow in the city center. Schenectady got colorful upgrades with “Imagine,” a Capital Walls mural by Dha’Sean Serrano and Oscar Bogran, a mural by Elona Hope Mitchell-Strong along Jay Street and two additional murals by Bogran at Keane Elementary and Pizza King, the latter painted in collaboration with local youth during the Kids Arts Festival in June.

The presence of public art is not new, but the region, specifically Albany and Troy, has reached a critical mass of public art that has opened the door for more projects and greater support, said Judie Gilmore, director of special projects and partnerships. at the Arts Center and the curator of Troy Glow.

“It seems to be this tipping point where there is no public art and it seems impossible,” she said. “But once people start seeing it, they expect it and it can happen, and there’s more of a demand for it.”

The renewed focus on creative outlets and outdoor exhibitions during 2020 may have played a role in the proliferation of public art, Gilmore said. Arts organizations had to look outside their gallery walls to safely exhibit art, and they leaned on public demand for more.

Art also became an important coping mechanism and mode of expression during the early stages of the pandemic and the nation’s racial reckoning, Iadicicco said.

“Creative things helped (people) get through days when there were a lot of tragic things happening all over the country,” he said. “(Art) has helped activists and creative people give a visual expression and humanize things that are happening.”

Cities across the region are allocating more funds received through the U.S. Rescue Plan and other grants to public art, helping to address the financial obstacles many artists and arts organizations face.

“Small cities have really started to look at what bigger cities are doing for things like economic development and placemaking,” Gilmore said. “There’s been great success in the last 40 years of public art as this wonderful tool for revitalization.”

Saratoga Arts, which oversees the state funds reallocation process for Saratoga, Fulton and Montgomery counties, has seen a surge in applications for community-based arts projects, said executive director Louise Kerr. The organization has already received more than $200,000 in applications (applicants can only ask for a maximum of $5,000 for nonprofit-led projects and $2,500 for individual artists). Saratoga Arts only has $150,000, Kerr said, and hopes to get more money next grant cycle to meet the growing need.

“It shows me not only that communities are embracing more arts and culture because they’ve missed it so much, but it also shows that people realize there are resources for them to be creative, and that they will be compensated,” she said. said.

However, funding has been an obstacle in Schenectady. Challenges exist for those behind public art projects to apply for funding without the infrastructure to support the artists, said Heather Hutchison, executive director and founder of CREATE Community Studio. The studio hopes to fulfill the same roles that the more established Albany Center Gallery and Arts Center have served in Albany and Troy, respectively.

“We’re at this tipping point of trying to find bigger pools of funding,” Hutchison said. “Community art grants are $5,000. It doesn’t go very far when you’re talking about a mural or a sculpture or a larger piece of public art.”

Hutchison does feel like the buzz for these public art projects is growing in the Electric City, thanks to the murals and installations already in place, including Schenectady and Me, a series of neighborhood benches smothered in community-made ceramic tiles.

“The community wants it, there’s no doubt about it,” she said. “It’s just a matter of finding your money.”

However, Bogran feels that change is happening. He says Troy is at the forefront of public art, and Schenectady will soon follow.

“Now the powers that be are getting comfortable with advocating for funding for (public art) and promoting local artists,” he said.

The context and community connection of the work also contributed to the rising momentum. Jade Warrick, also known as TrashKiD Art, focuses on community engagement in her new role as the Art Center’s curator of public art and placemaking. Creating an accessible and equitable public art scene is difficult, she said, and it relies on listening to the community.

“This is public art,” Warrick said. “You need the public’s eye in that.”

The cities focus on supporting a diverse list of artists with a range of styles lends itself to making public art accessible and relatable to its communities, as well as the nature of its public location.

When Bogran, born in Honduras, moved to Brooklyn as a child in the mid-80s, graffiti art captured his fascination. As he continued his artistic journey, the thought of taking art out of the confines of elite, historically white galleries excited him.

“I liked the fact that it was against the grain,” Bogran said. “It brings art into the public sphere, and it makes it accessible to everyone.”

Investment in public art also affects the artist communities. Warrick noted more artists in Troy are starting their own small businesses and non-profit organizations because of the city’s commitment to the arts.

“Having the public art in our communities supported and really highlighted gives people the confidence to really trust in their own abilities and thrive in it,” said Warrick.

Continuing this public art momentum will require the support of young and emerging artists, according to Warrick; encouraging private sectors to fund projects and cities to collaborate and share resources, according to Gilmore; and government officials and local leaders to continue to advocate for these projects, which help artists feed their families, according to Bogran. But if the region can maintain this momentum and encourage artists to take root here, they will create impacts that can outlive their murals, Iadicicco said.

“There’s a lot of blank canvas in this region, and a lot of ripe opportunities,” he said. “(Art) can really change people’s lives, whether it’s people who create it or people who experience it. Art has that power.”