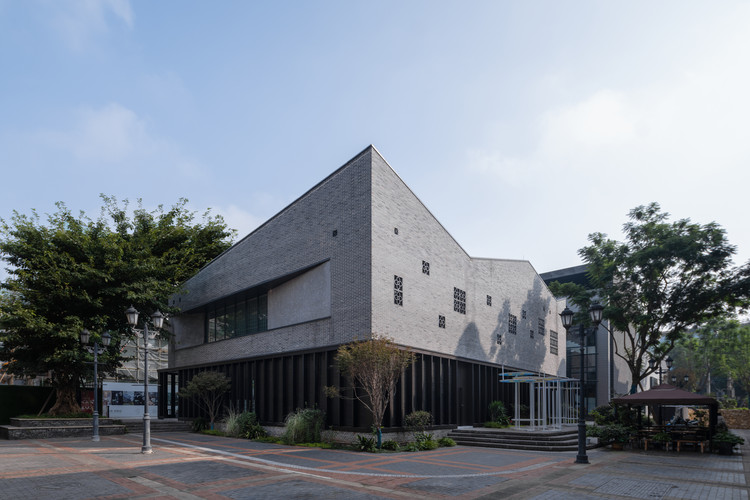 A description of the text provided by the architect. Qionglai is part of Chengdu, one of Basho’s four ancient cities. With more than 2300 years of development, the city’s grounds haven’t changed, the culture has been passed down, and it’s endless. In recent years, the city of Qionglai has adopted a district development model, demonstrating the Wenmai Lane reconstruction project, and is actively implementing urban renewal projects. A higher pursuit of art. Fortunately, we built the Kyorai Museum, the first museum in Kyorai, in the city. Due to the unique roof shape, “Chong Luang Courtyard” has become the “nickname” given to the Kyorai Museum. You can “see” the building from the heavy mountains, and as you approach the building, visitors can feel a long history as they approach the building. After entering the space, people were able to feel leisure and further strengthen their sense of cultural context.

By abstracting two sloping roofs from a local residential settlement, using overlapping connections, and symmetrically folding using the surrounding “mountains”, the various roofs are directly overlapped and connected, “mountains”. Form the roof. It matches the texture of the inhabitants. Due to the small volume of the building, the volume between the roofs is equal, there is no absolute dominant part, and the building is more compact.

We continue to design with the aim of “continuing the texture of streets and lanes, reconstructing the architectural style, and reproducing the prosperous Linkion scene.” First, using a traditional closed courtyard as an architectural prototype, lift the building blocks to secure overhead space on the ground floor, expand the courtyard, the problem of small space and the difficulty of the scale of a comfortable courtyard. To solve. In the meantime, the traditional wooden door façade style of the house was introduced, forming an openable and closable interface. This served as a transition between street promotion and courtyard privacy, enriching the spatial hierarchy. Finally, the combined “Chong Luang Roof” was covered in the hope of creating an artistic and cultural atmosphere for the urban mountain dwellings.

However, construction technology is limited. To maintain the perfection of the shape of the building, the façade adopts a double-walled structure, the roof adopts the shape of folded beams, the weight of the walls and the stacking and undulation of the roof are realized, the ancient building Traditional aesthetics of structure.

The exterior of the building wants to use contemporary materials and traditional elements to create a contrast between the old and the new, creating a time-overlapping experience. The first floor has a unified façade with wooden bamboo windows and doors that can be opened and closed compared to houses. The exterior walls of the two-story building are mainly mixed with recycled blue bricks, rational use of existing resources, and continuation of traditional elements. Facing Wenmai Lane and East West Plaza, the three architectural glass curtain walls, combined with embedded water-polished stone walls, focus your gaze and increase commercial value. The building adjacent to the north is relatively close, and concrete lattice windows combine virtual and three-dimensional to decorate the exterior shape.

In the interior space, the courtyard is the core for organizing functional units. The inside of the first floor is for the logistics assistance room, and the other important parts and the second floor can be used as the exhibition space of the museum, providing enough space for art to branch.

The interior studio incorporates “mountain-shaped water” as an overall design concept that reflects the architectural plan, and unifies the interior space and the exterior to some extent. At the same time, more modern materials are used indoors, historic civilizations and cultural traces are exchanged in space, and new chemical reactions take place.

With the completion of the Kyorai Museum, a new urban function was embedded in Kyorai, which served as a bearer of historical memory and a space for the dissemination of art and culture. We hope that Wenmai Lane will inherit and develop some of the beauty of traditional streets and lanes, while at the same time leading and carrying better lives for the locals in the future. Therefore, it is worth demolishing historical and cultural things. block. It absorbs spiritual nutrition from the outside world, stimulates the inner cultural heritage, and slowly accumulates a unique culture that fuses ancient and modern times.