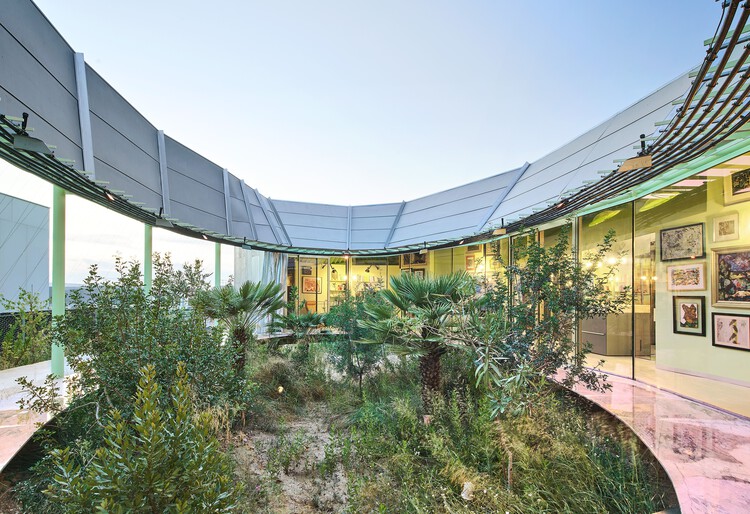 A description of the text provided by the architect. Since the 1980s, the vast land of the once rural Molina de Egra County (Murcia) has been used to create suburbs. As a result of this exploitation, the terrain of the land becomes flat and the territorial system of the canyon (Rambra) is destroyed. Ramblas constitutes the structure of veins carved by seasonal rainfall in a dry meadow landscape. Moisture builds up there and biodiversity flourishes. They form a corridor of freshness, carbon fixation, and ecological intertwining that plays an important role in the climate and global stability of Molina de Segura’s ecosystem.

Rambla Climate-House acts as a climatic and ecological device. This is part of a series of associative initiatives developed on an independent citizen scale to contribute to compensation for environmental and climate damage caused by the over-urbanization of Molina de Segura. Rambla Climate-House collects pooled rainfall from the roof, reclaimed water from showers and sinks and sprays it onto Rambla’s ruins to regenerate its former ecological and climatic composition.

Humidity and conductivity netrosensors activate automated meteorology, evading human control and reaching the requirements of the compensation process. The houses are organized around this oval section of the Rambra, as an observatory allied to this reconstructed landscape, and as a series of interconnected spaces of different widths.

Following the restoration of Rambra’s hydrothermal conditions, a glimpse of life beyond its predecessors rapidly reappeared after a period of one year. Currently, the oval part is home to short tails, myrtle, mastic trees, palm trees, oleanders, and fire trees. Insects, birds and lagomorphs find shelters there.

Thermally, home construction tests unorthodox ways to maximize energy efficiency. Marble benches around the oval section allow the occupants to cool by allowing direct contact with the thermal inertia of the house. The sun-exposed coil that covers the oval area provides passive hot water all year round.

Rambla Climate-House is the result of a collaboration between architects Andrés Jaque / Office for Political Innovation and Miguel Mesadel Castillo. Soil scientist Maria Martinez Mena. Ecologists Paz Parrondo Celdrán and Rubén Vives. Everyone is committed to contributing to the growth of the grassroots movement that claims climate compensation in Murcia. Since its completion, the house has become an empirical device.

Gatherings with neighbors and members of the Molina De Segra community are organized to share insights and experiences in a joint effort to rebuild Molina De Segra’s urbanism.