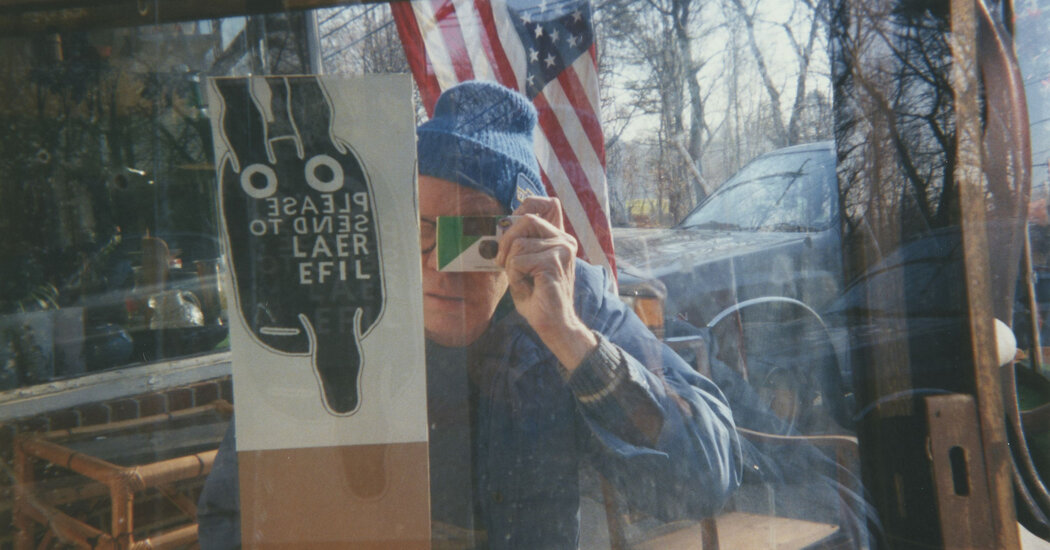 American artist and downtown New York figure Ray Johnson (1927-1995) might have become a household name had he not burned his early abstract paintings. Instead, Johnson embarked on a different course, creating collages, mail art sent through the postal service, and exploring photography—but not as a high-end “art photographer” or darkroom practitioner. Johnson was fascinated by folk photography. He copied photos from magazines, used disposable cameras and treated photo booths as ad hoc art studios. In the end, he left about 3,000 color photographs, many taken in the last three years of his life and virtually unexamined for three decades. Dozens are on display in the wonderful, jam-packed exhibit “Please Send to Real Life: Ray Johnson Photographs” at the Morgan Library & Museum.

Born in Detroit, Johnson emerged in the avant-garde world of American art in the 1940s and ’50s. He attended Black Mountain College in North Carolina, studied with Josef Albers and later lived in the same building in New York with the composer John Cage and the choreographer Merce Cunningham. A photograph in this exhibition by Hazel Larsen Archer titled “Ray Johnson at Black Mountain College” (1948) shows the back of Johnson’s head, rather than his face – a typical expression of how Black Mountain artists tried to look differently at everything from painting to portraiture.

Later, Johnson was an assistant to painter Ad Reinhardt and worked as a graphic designer. Despite making commercial art (he designed book covers for New Directions press, among other things), Johnson retained that experimental approach, favoring scruffy poetic and conceptual gestures over glossy objects. Photos such as “Bill and Long Island Sound” (1992), in which the artist held the blue beak of a cap over the coastline, imitating a crescent moon, are proof of this. Other works include shadows, silhouettes, writing in the sand, or Johnson’s collages and cardboard signs placed in telephone booths, public monuments or natural settings.

Johnson has often been labeled a pop artist, and you can see overlaps with the likes of Warhol in his obsession with the booming celebrity culture of the 1950s. Johnson’s long-running project, called “Movie Stars,” consisted of photomontages and collages made with cardboard, about three feet tall, featuring faces of celebrities — or his signature absurd bunny. These works also served as a kind of archive, a large catalog of artists and politicians, such as Marilyn Monroe, Elvis Presley and Bill Clinton. Johnson even treated brands or their mascots as celebrities: Mickey Mouse, Ronald McDonald and Pepsi-Cola appear in texts and images.

Johnson also often found himself in conversation with a famous person. A wonderful photo here, “Headshot and Elvises in RJ’s car” (1993), captures two cardboard works, one with a photo of Johnson’s face and another with two of Elvis Presley, propped side by side in the passenger and driver’s seats of Johnson’s car, as if they were about to go out for a ride. In other works, Johnson appears with the poet Arthur Rimbaud or the singer David Bowie.

In the same way that Johnson burned his early paintings and gave up the most reliable route to a successful art career in mid-20th-century New York, he abandoned the struggle of Manhattan. In 1968 he moved to Locust Valley, Long Island, and after 1978 he had only two solo exhibitions – the last one in 1991. However, he continued to make art, looking at artists such as Joseph Cornell, known for his box sets, who lived on Utopia Parkway in Queens. Many of Johnson’s works take Cornell’s idea of ​​the display case filled with curious objects and expand it into tableaus staged for the camera, using the suburban setting, the forest or the seashore as theatrical sets.

Elisabeth Novick’s photograph “Untitled (Ray Johnson and Suzi Gablik)” (1955) shows Johnson playing with a cut-out silhouette – a kind of early performance photograph – while photographs taken by Johnson and titled “Outdoor Movie Show on RJ’s car” (1993 ) and “Outdoor Movie Show in RJ’s Backyard” (1993) capture series of cardboard “Movie Stars,” suggesting that anywhere can be an art gallery—even your own lawn or driveway.

Johnson’s presence in many of the photos could be called self-portraiture — but the photos also feel very much like ancestors of the ubiquitous cell phone selfie. The photo “RJ with Please Send to Real Life and camera in mirror” (1994) is an obvious selfie precursor. However, it includes a number of conceptual twists: Johnson appears in a mirror, holding a disposable camera and one of his cardboard signs with an alter-ego bunny and the words “Please send to real life” printed partially in reverse – a reminder of how the camera does not simply document reality, but shapes and possibly distorts it. (This photo may also be a reference to his postal art practice or the New York art magazine Real Life, published from 1979 to 1994.)

What would Johnson think of our moment, in which virtually everyone with a cell phone is a photographer and the selfie has come to dominate? Johnson died in early 1995 — by suicide, jumping off a bridge in Sag Harbor, LI, in what was often seen by his friends as a kind of mysterious performance gesture — so he had the digital revolution and the so-called image flood. of near misses. infinite photos. Yet he predicted these things with his “Movie Stars” series, in which anyone can be a celebrity – or join a picture with one – and the staged works that create situations such as riding with Elvis or going to looking at a newspaper moon over the sea.

What is art? What is real? Does the image document reality or create it? “Please Send to Real Life” raises some of these questions and shows how Johnson foresaw the growing blurring between the realms of photography and IRL (from snapshots to social media) suggesting that the relationship between them is porous but also ripe for creative intervention.