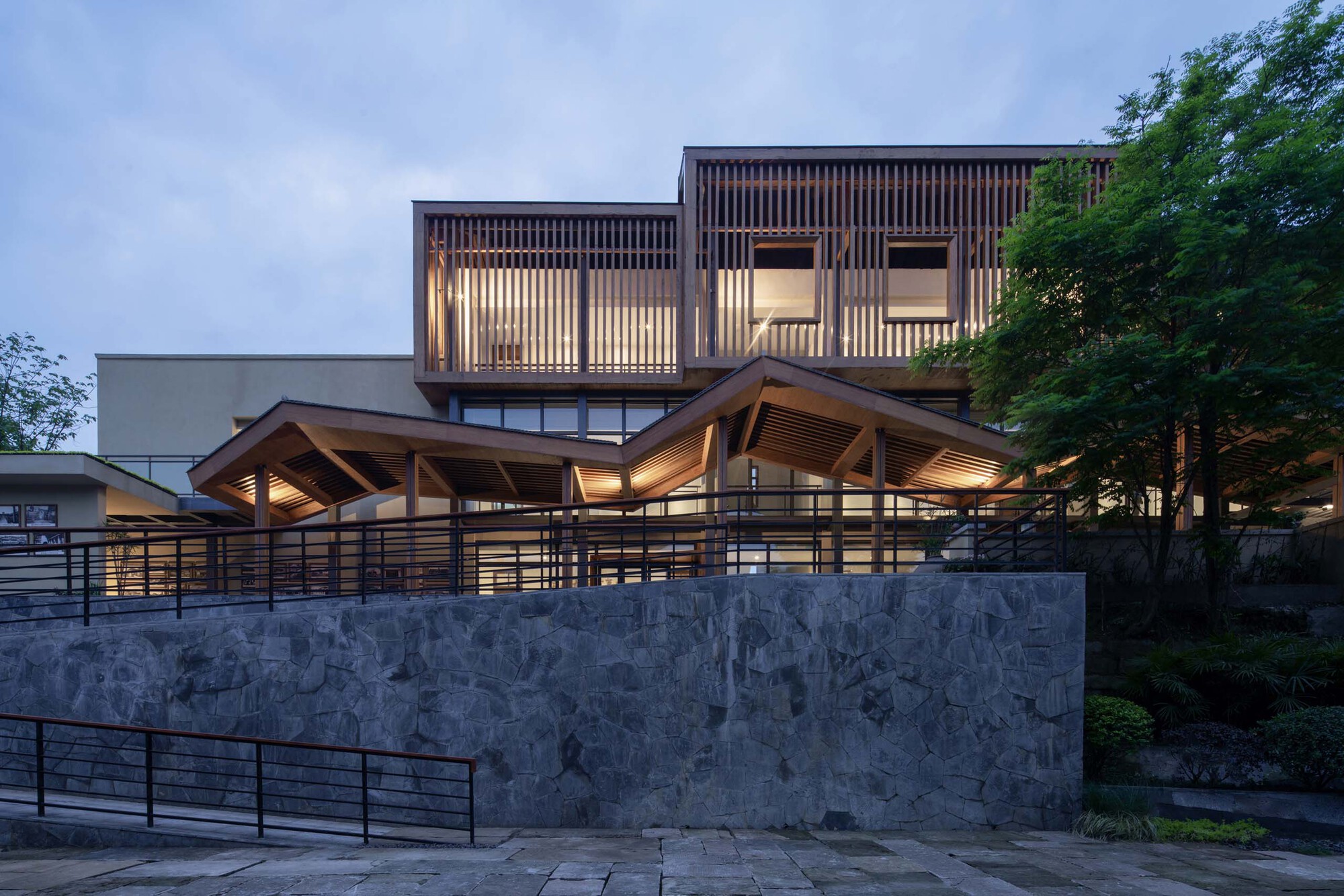 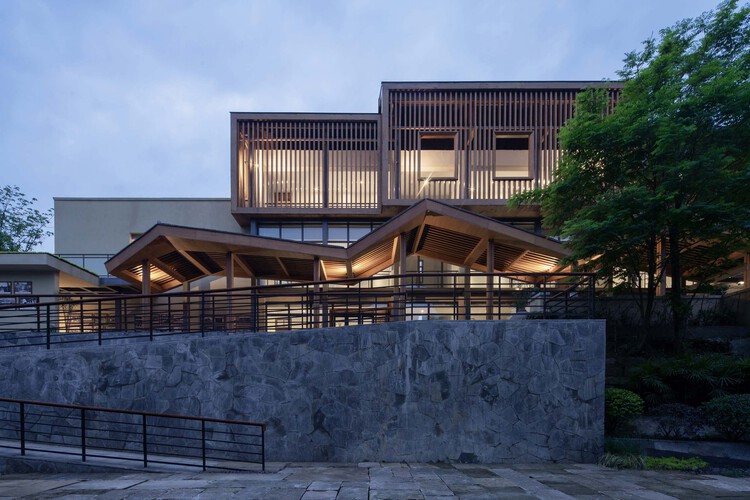 Text description provided by the architects. Shajin Primary School is located at Mingyue Lake in Shajin village, Yubei District, Chongqing (Now the Chongqing Liangjiang Collaborative Innovation Zone), which was built in the late 1980s. As a former rural primary school, it was abandoned in the early 21st century. Now it is being transformed into a museum for the relocation of universities in the Great Backlog of the Resistance War and supporting public service space.

Response: Poetic Resonance with Nature. In terms of site treatment, the original playground on the east side of the site is used to shape the relationship between the upper and lower platforms according to local conditions. The upper platform connects the main entrance of the building, and the lower platform has a good relaxation atmosphere and a wide view of the waterfront; Five staggered viewing platforms are introduced on the west side of the building to connect the high and low sites so that the building can adapt to the site conditions and create a transitional public roaming experience. In terms of landscape design, we uphold the concept of ecological restoration and try to use original and wild plants on the premise of preserving the original landform and large plants of the site.

Old and new: The ebb and flow of time. The main body of the original building was a three-story brick and concrete structure, the architect follows the structural strategy of “light intervention”, and the new steel structure system is placed to coordinate the relationship between the old and new structures, so that it has not only rotated and integrated with the original volume, but also carries the load independently. At the entrance of the exhibition hall on the east side, the continuous folding slope roof is added to form the gray space of the exhibition gallery, creating a sense of ceremony to enter the space and the original rigid interior and exterior boundaries of the building to soften. .

Borrowed scenery: Return to daily interest. At the entrance to the site on the east side there is a 30 meter long ramp connecting the upper and lower terraces. At the end of the driveway a strong old tree is preserved from the original site forming a mutual view with a row of trees on the bank. Standing on the stair platform on the second floor of the interior, you can directly see the landscape arrangement at the entrance of the building, which forms a relationship between seeing and being seen. The interior space of the building adopts the technique of borrowing from afar, looking inside and feeling “countless mountains far and near”. The scenery changes step by step, and the scenery is everywhere.

Context: Continuation of The Spirit of Place. The abandoned Shajin Primary School used to be a basic education facility for children in the countryside. After transformation, it was used as an exhibition hall to publicize the dramatic history of the relocation of colleges and universities to the rear during the war. From the original function of rural education to the current historical exhibition education, it is not only a replacement of function and revival of space, but also a heritage of culture and the continuation of the spirit of space.

Prospects: The quest for modernity in Village Primary School. Education is the starting point for changing the countryside by interrupting the intergenerational transmission of poverty, the intervention of architects is the key to rewriting the code of rural genes. The preservation of physical space is the glimpse and memory of past years, while the memory space is the taste of mountains, wind, sunshine, time and human feelings.