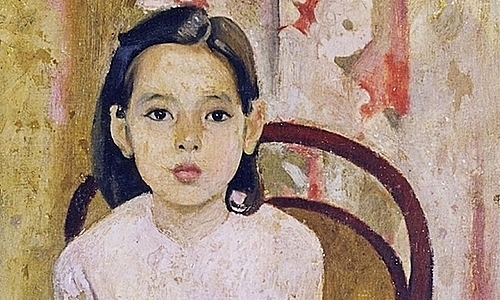 The restored artwork, which was awarded the status of National Treasure in 2013, is now on display on the second floor of the Vietnam National Fine Arts Museum in Hanoi.

In addition to using professional lightning bolts for exhibition, “Em Thuy” and other paintings, the artifacts are stored day and night in a room with a temperature of 20-25 degrees Celsius and a humidity of 50-55 percent. ..

In 2003, many of the degraded artwork here needed serious restoration.

Created in 1943, “Em Thuy” was chosen as the first work of restoration. At that time, the surface of the photo was covered with dust, soot, smoke, and insect droppings. The canvas had blisters, peeling, and warpage. The old painting was also cracked while some parts were peeled off due to the hot and humid environment.

Caroline Fry, a painting restorer at the Grimwade Center for Cultural Property Conservation at the University of Melbourne, Australia, was invited to Vietnam in 2004 to restore “Mtui”.

The restoration process takes place at the Conservation Institute of the Vietnam National Fine Arts Museum and includes seven steps stipulated by international regulations and standards.

First, an expert investigated the current state of the original picture and took a picture. The next step is to use a heated knife to smooth out the paint debris and place a silicone coated paper that does not adhere to the surface of the paint.

Experts have found a layer of opaque varnish beneath the surface of the dirt, raising suspicion of previous repair attempts. This meant that the paint had to be removed using chemicals. A Pararoid B72 solution was applied to the surface to protect the artist’s original strokes. She also used a broom to remove the dust on the back of the painting.

In step 4, the peeled paint was processed. The fly applied a protective paint layer and restored certain areas with watercolors and special pigments.

The face of Tui, the soul of the photograph, was extensively exfoliated and damaged, requiring complex attention. The fries were filled with watercolors to make them easier to remove in the future before using synthetic resin. The final coating had exactly the same color, luster and texture as the original coating.

In step 5, we created a new frame and patched the surface crevices with a plastic sticker.

What’s more, she repaired and reinforced the picture frame, especially the corner joints, to provide stability before placing the painting on the new glass frame.

The last two steps involved taking a photo and creating a report. The entire process took four months for the professionals to complete.

The work was handed over to the Vietnam National Fine Arts Museum on June 28, 2004.

Today, paintings and relics are inspected and preserved on a regular basis. If a problem is detected, staff will report it to the Repair and Repair Center for immediate action.

“Mtui” is one of the outstanding portraits of contemporary painting in the country. This work depicts Tui, an 8-year-old real girl. Her big round black eyes, plump lips, chubby cheeks, and sideways hair look straight at her opponent.

The girl sat on the left side of the photo, clasping her hands on her lap. The curved brown rattan chair creates a balanced composition of the painting. The light-colored clothing harmonizes with the pale yellow wall behind.

According to the Department of Cultural Heritage, Chang Van Kang’s work is influenced by the typical European-style layout of the early 20th century. The painting of “Mtui” is recognized as a national treasure because it is recognized by unique and historical researchers. This work represents the art of realistic depiction and the genre of portrait painting in Vietnam in the early 20th century. This artwork also contributes to the reflection of the image of pre-August Vietnamese society on the colonial rule of France and Japan in August 1945.

The character in the photo is Minh Thuy, the granddaughter of the painter Chang Van Kang. One day in 1943, when she saw her granddaughter wearing a pink Haddon silk shirt, he told her to sit down and act as a model for her painting. At that time, Minh Thuy was studying for girls at Ecole Brew Elementary School.

It took the painter several months to complete this masterpiece.

This work was first introduced at an exhibition in Hanoi in 1943. This painting later helped Chang Van Can win the highest award at the AFIMA -l’Association pour laFormation Intellectuelle et Morale des Annamites exhibition.

After that, his family was evacuated in the war and he lost his job.

In 1964, the Vietnam National Fine Arts Museum purchased paintings on the VND300 from the family of photographer Do Huan.

At that time, the salary of new graduate civil servants was only 64 dong per month. After that, the painting had to be stripped, mottled and placed in a special storage location.

Thuy is now 87 years old and lives in Hanoi with his children and grandchildren. She suffered from her memory loss and many illnesses in her old age, and she couldn’t remember when she was eight and was sitting in her chair as a model for Can.

Expert Caroline Fry once said she was overwhelmed by the beauty of the painting when she first saw it.

“Even in bad conditions, this work is appealing and it’s no exaggeration to call it the Mona Lisa of Vietnam,” she said.

The painter received the Ho Chi Minh Award for Literature and Art and many other professional awards in 1996.