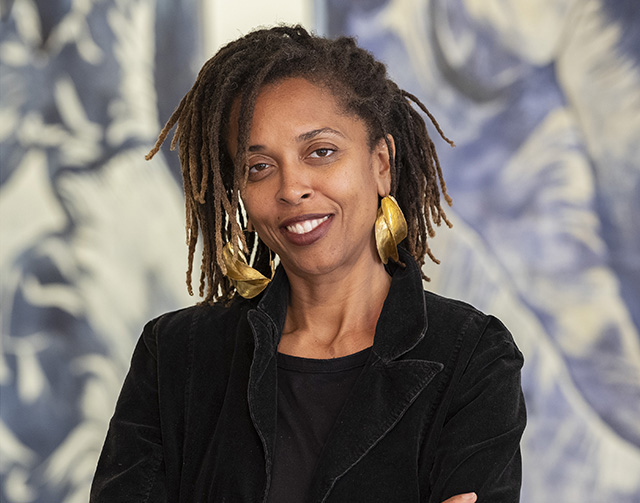 When Charmaine Minniefield found herself quarantined in The Gambia due to the pandemic, she decided to use her time in the West African country to research what she calls her “ancestral memory”.

Her research led her to create seven self-portraits that reflect a tradition whose cultural origins, she says, predate North American slavery and which have taken many forms—some practiced by enslaved people in America and some that have existed for many years. subsequently developed in African-American communities. slavery was outlawed.

“Ringkreet was performed in praise houses—small wooden structures used as gathering spaces in safe, sometimes secret places—where those enslaved could remember themselves and secretly preserve their African identity,” Minniefield explained, adding that the work that visitors at Emory and will see in secret. elsewhere recalls this act of remembrance as taught to her by her great-grandmother Oral Lee Fuqua. As a prayer and as a symbol of resistance to the loss of African and African-American culture, people dance, spin and raise their voices during hatch cries, she said.

The event at the Carlos Museum will mark the beginning of several public art installations in the metro Atlanta area over the next two years. Minniefield said she wants to choose places for the praise houses that have special significance in the African-American community. “I read a newspaper article that told of the bones of addicts being found at Oakland Cemetery, not buried properly, but just thrown over a hill into a drainage ditch. I wanted to put a house of praise there to honor their memory, even though we don’t know their names. I also wanted to put one at the South-View Cemetery where John Lewis, many members of the King family and other prominent African-Americans are buried.”

Minniefield, who attended Agnes Scott College and currently lives in Clarkston, said she wants to make sure there are praise houses in DeKalb County. “DeKalb County is so rich in African American history – some of the oldest in the area. When I applied for an Our Town grant from the National Endowment for the Arts, I needed a local government partner and DeKalb County agreed to be that partner. I also wanted to make sure Emory University was involved,” said Minniefield, who recently served as the Stuart A. Rose Library Artist at Emory. Each Praise House, she added, will feature the Afro -American histories honored in its community, including Emory University, where it is planned for the academic year 2023-2024.

At the urging of those in DeKalb County’s education community, Minniefield decided to place a house of praise in Lithonia’s Flat Rock community, believed to be one of the area’s oldest African-American communities, where, shortly after the Civil War, newly freed people attended school and built churches. , civic organizations, the establishment of a close-knit community. It is now home to Flat Rock Archives, which is dedicated to preserving rural Georgia’s African American history. The plan is to make the praise house at Flat Rock permanent, she said; others will be temporary.

An announcement from Emory University called Minniefield’s work “firmly rooted in feminist social theory and ancestral veneration.” She is the artist-in-residence for the King Historic District, supported by the Historic District Development Corporation.

Minniefield said when she uses the phrase “remembering is resistance,” people often ask, “Resistance to what?” “I say, resistance to extinction.”

Indigo Prayer: A Creation Story” will be at the Michael C. Carlos Museum on August 28, 1:30 and 4:30 p.m. At 1:30 p.m., Minniefield will be assisted by Julie B. Johnson, chair of the dance department at. Spelman College, and Tamara Williams, associate professor of dance at the University of North Carolina, Charlotte, for a conversation about movement as medicine, embodied memory, and the ring scream as resistance. The conversation will be followed by a performance by the Gullah Geechee Ring Shouters of Darien, Georgia, led by seventh generation shouter Griffin Lotson. “Performing professionally since 1980, the 10-member group has educated and entertained audiences across the United States with the ‘ring cry,’ a compelling fusion of counter-clockwise dance movement, call-and-response singing and percussion,” according to Emory. The program is free and open to the public and is co-sponsored by the Emory Office of Spiritual and Religious Life.

Also on August 28 at 16:30 Sunday Dinner – An Ancestor Festival will be held in Carlos Museum’s Ackerman Hall. The meal, described by Emory as “a contemporary take on the traditional gathering,” will be prepared by 2022 James Beard Award finalist for ‘Emerging Chef’ Cleophus Hethington. He will prepare a family meal inspired by his interpretation of the cuisines of the African diasporas. The fee for the dinner is $60 for Carlos Museum members and $85 for non-members. Space is limited and registration is required for this event.

For more information about Minniefield and the Praise House Project, visit PraiseHouseProject.org or call (404) 202-2271.