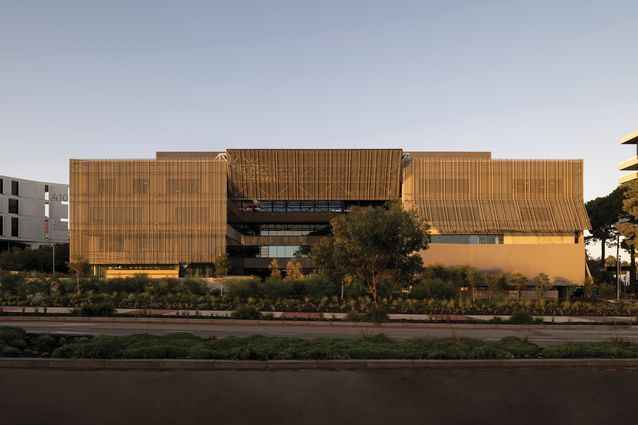 The new School of Design and the Built Environment (DBE) at Curtin University is the third school of architecture that John Wardle Architects (JWA) has designed over the past two decades. The University of South Australia’s Kaurna Building was the first, in 2006, followed by the Melbourne School of Design at the University of Melbourne, in 2015. Together, these three projects both describe the incremental changes taking place in the way architectural education delivered, and the impact of different procurement models on built outcomes.

Curtin’s old architecture building – or Building 201, as it was fondly called – was designed in 1969 by Vin Davies of the Department of Public Works. It is a monument to brutalism and sits in the middle of the campus, next to the library. The building’s most public thoroughfare and the focus of student life was the infamous “blue carpet level” (the name stuck, even as the carpet changed to other colors over the decades). The space of pin-ups and presentations, this is where student work was critiqued and assessed. Public humiliation or celebration – the building was brutal inside and out.

Over the years at Curtin, as Building 201 struggled to adapt to new methods of teaching and learning, there was much discussion about what a new school of architecture might look like. The new DBE building sits in the heart of the recently completed Exchange innovation precinct, six kilometers from the Perth CBD. Unlike the low-rise buildings on the edges of the campus, this new neighborhood, which includes student accommodation, a hotel and a supermarket, is dense with designs by architects including Six Degrees, Nettleton Tribe and JWA. The DBO is the only academic building in the Exchange and, like the other buildings in the mixed-use area, the porosity of its ground floor is an attempt to create a bustling and activated “street”.

Twenty percent of the building’s floor area is allocated for industry participation, in addition to the shared learning and collaboration spaces spread across the various floors. This is a core part of the project brief and reflects the university’s move to create a living laboratory where learning, teaching, research and industry coexist. The spaces are designed to facilitate formal and informal interaction between the different disciplines (architecture, interiors, fashion, games, graphics), in addition to industry. Only time will tell how successful this strategy has been.

The civic heart of the project is the large courtyard, onto which many of the ground floor spaces open. The building is arranged around the void of the courtyard, giving the internal footprint a thinness that allows views and natural light from every space – often in two directions. Biophilic design principles helped determine a strategy of planting on structure, connecting internal views to landscape at every level, and improving the well-being of users through the design.

The external courtyard is complemented by a second, courtyard that connects over all five floors. This deconstructed “blue carpet level” snakes its way through the interior, offering various places for group activity, individual study and presentations. With every vertical surface and many of the desks specified to allow pen-ups, students and staff are spoiled for choice.

When I started studying architecture at Curtin in the late 1980s, each student had a dedicated studio space for the year, and this remained the case until relatively recently. It is hardly a contemporary observation to note the absence of drawing boards and the prevalence of laptops. What is interesting is the profound impact it had on the way a new architectural building is designed. The shift away from dedicated studios moved the learning spaces into the center. Rather than the spectacle of presentations, the building is activated by circulation spaces filled with opportunities for group or individual study. The allocation of space has shifted from a predominance of formal spaces to a predominance of informal spaces.

Sustainability was central to the project brief and JWA undertook a thorough approach to site planning, materials and energy consumption. Most of the buildings that make up the Exchange were built at the same time, providing a valuable opportunity for innovative approaches to shared energy, water, plant and mechanical systems. Furthermore, the DBO building itself is a tool for learning. Building information, including energy meters, is visible to aid student learning, while specialist learning studios allow students to test alternative mechanical systems, including thermostats, glazing and air conditioning units.

JWA was initially appointed to undertake a Project Definition Plan (PDP) at Curtin. Given access to staff and students, the practice developed a deep understanding of the learning culture at Curtin. Following the RDP, the university launched a market-led consortium bid, separating the architect from the users and aligning them with a delivery team led by a funder. Unlike at the Melbourne School of Design, where the design staff and principal were intimately involved in the conception and execution of the building, this approach meant that the design response was more closely aligned with budget and delivery. Partway through the process, however, the university reconsidered this approach, effectively withdrawing JWA from the consortium and engaging the practice directly as the design architect and lead consultant for the DBO building. JWA was able to translate its intimate understanding of Curtin’s ethos into the new design.

While consortium-led bidding has been popular in Western Australia over the past decade, it actually adds unnecessary project complexity by separating the architects from the users. It shifts the focus away from innovative responses in favor of time and money driven outcomes. In this comparison, design is part of the consideration, but not necessarily a driver.

The DBO building has benefited from JWA’s long relationship with the university. During the practice’s involvement, there were three different principals, and many times the architect was consulted as the cultural knowledge holder for the school. The outcome for this building could have been very different had the university not withdrawn JWA from the consortium team.