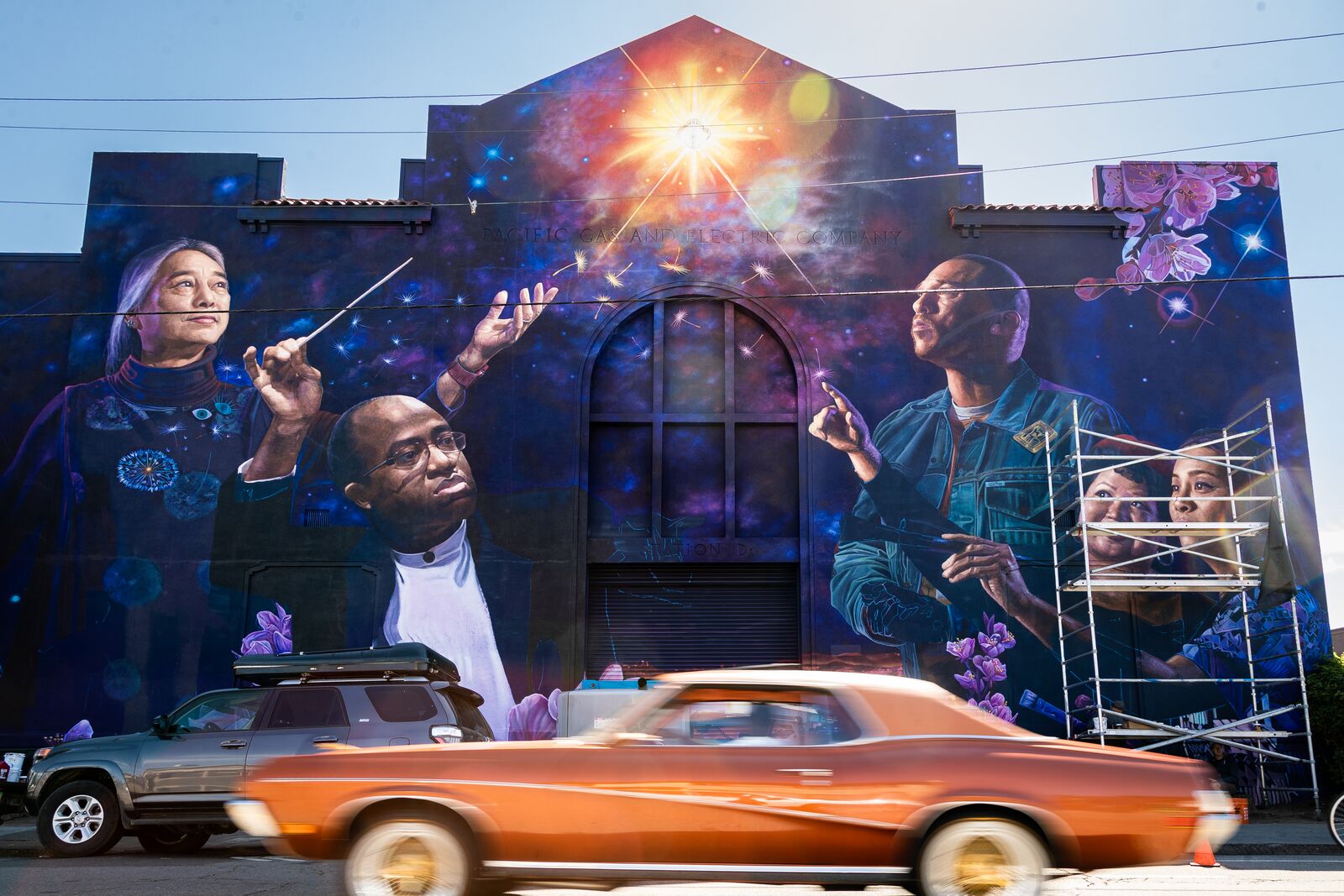 David Burke sits on a scissor lift, a crane-like machine that rises high above the ground, with a lump of paint dripping from the brush. Burke is finishing his latest mural project, Love letter to Auckland 2.

At the bottom, artist Joevic Yeban carefully checks how the facial expressions in the mural hit the wall. Pancho Pescador, on the other hand, adds a purple tint to the flowers on the base of the mural. Curious spectators stop to take pictures and see if they can recognize the face on the wall.

The murals on 51st Street and Shattuck Avenue are A love letter to Auckland. The first was painted on the walls of Fourth Avenue and Oak Street, completed in 2018 as part of the Oakland Mural Festival.

The Loveletter A total of five murals throughout Auckland, this series depicts the old generation’s act of “passing a torch” to the younger generation they inspired and influenced. According to Burke, one of the goals is “to honor those who have created a cultural landscape and paved the way for the next generation here in the Bay to establish a visual line of excellence in the Bay Area.” is.

The second mural depicts the portraits of the late Oakland Symphony Orchestra conductor Michael Morgan and the late Mills College professor and artist Hongriu on the left. Twin Wall Mural Co. This painting decorates the wall of the PG & E substation in Temescar.

“A mural like this is probably about $ 50,000,” Burke said of material and labor costs. “And we do it in less than half. We do it with a little bone.”

In addition to its size, the most striking aspect of the mural is how realistic the portrait is. Jobic Yeban, who worked with Burke in the past, is the villager behind the work that brings his face to life, drawing his face with great care in realism.

The mural production began last year when Burke teamed up with photographer and cinematographer Steve Bubblejack. Bubblejak invited all the subjects in the mural to his studio to take portraits, except for Morgan, who died in August 2021. She died shortly after Liu took a picture of her.

The deaths of Morgan and Liu made the project feel more urgent, despite the lack of funds needed to complete the project, the villagers said.

“Sometimes it’s not all about money,” Pescador said.

Babuljak also recorded an interview with the subject, which is the second part. Loveletter People who will eventually be part of the series, and eventually the rest of the murals in the series.

The dedicated Instagram page for the Mural Series project contains excerpts from the interview.

“Dave [Burke] He is one of the few people who does more than just throw beautiful paints. Everything he does is intentional, “Bubblejak said. “I have tried to do justice by catching it in some way.”

Oakland is no stranger to the giant murals that honor local artists, musicians, writers, and even everyday people.

Artists Daniel Galvez, Dan Fontes and others Street tattoo A mural under the I-580 overpass near Sun Pablo Avenue near the Greyhound Bus Station in 1982. It depicts children playing, skiers and wheelchair racers, and firefighters. It decorated the wall until years of negligence filled the wall.

In 1983, Daniel Galvez, Keith Sklar, and more Grand performance Grand Avenue I-580 Mural under the overpass. The mural depicts historical figures such as Julia Morgan, Jack London, and Calvin Simmons, the first black conductor of the Auckland Symphony Orchestra.

“When I was young, I was about eight years old. It was the people of Daniel Galvez and Dan Fontes. I saw those works when they were made,” Burke said. Said referring to the activist. “It was magic to see those murals, especially at that age.”

While giant murals are in the spotlight, Burke and Pescador have not seen enough support for artists to maintain them.

“The city of Auckland can give a subsidy to make a mural, but there is no budget to maintain it, and I think it’s very important,” said Pescador. “Cities need to start respecting the cultural heritage left by the artists. I hate to see the murals tagged and unrepaired. The murals come off.”

“The city loves to promote public art,” Burke said. “But they don’t want to take responsibility for helping with maintenance.

Burke, Pescador and Yevan also want to see veteran mural painters get paid to maintain their murals while supporting a new wave of young artists in need of mentorship.

Despite the hurdles to maintaining many of the city’s murals, the team is excited to get another work of art that introduces Auckland’s history.

“There are many people moving here who don’t know that there are people in Auckland who have shaped the culture for decades,” Burke said. “This is a way to show history and introduce young people who are speaking out. It’s a way to introduce people to people at work.”