New York Jewish Week by JTA — Photographer Emile Bosian grew up as the son of a Polish Jewish immigrant in New York. But when he died in 1990 at the age of 78, he left behind an unlikely legacy as a manhattan’s bustling Chinatown chronologist.

A hobby photographer, Bossian took about 80,000-100,000 photographs of the densely populated Lower Manhattan area from the 1970s to the 1980s, recording everything from crime scenes to parades to celebrities. Dozens of these photographs were published by The China Post, a daily newspaper that once had a circulation of 30,000.

However, the rest was left in a disorganized, obscure file box that was completely overlooked when my niece and nephew cleaned the apartment in the Confucius Plaza Apartment Complex. Bossian was one of the only non-Chinese residents during his lifetime. there.

However, in a remarkable event, the photo was rescued by a longtime friend, a Chinese-American actress May Wong. The American Chinese Museum has partnered with the Jewish History Center to showcase Bosian’s work in an exhibition entitled “Impossible Photojournalist.” The exhibition was held directly in August and has recently been extended until March 21st.

“I was amazed at the amount of photos he took in Chinatown and was confused by how little recognition he received,” Kevin Chu, assistant director of the MOCA collection, told New York Jewish Week. “I wanted to talk about the relationship between Bosian and the people and places he was recording.”

The partnership between MOCA and the Jewish History Center emerged in 2016 as part of a funding project exploring the crossroads of Jewish and Chinese migrant and refugee experiences, resulting in a digital archive of MOCA at Jewish institutions. It was made into.

A protest against police atrocities in 1975 after the murder of Peter Ichii, a member of the Chinatown community. (Emile Bocian, Museum of Chinese in America / Provided by JTA)

“For generations, Chinese and Jewish migrants and refugees lived side by side in Manhattan’s Lower East Side and Chinatown districts,” said Head of Archives and Library Services at the Jewish History Center. Rachel Miller said during New York Jewish Week. “These communities not only felt the familiar weight of American alien exclusion, exclusive practices, and assimilation pressure, but also followed similar labor patterns in the garment industry, with problematic stereotypes of” model minority. ” Attracted. “

“A serious comparative analysis of American Jewish history and Chinese-American history is hard to come by,” she added. “But inter-community projects like us encourage new research and promote greater awareness of everything that connects us in our overlapping struggles and successes.”

Throughout the process of digitization, archivists in both museums wore glasses and bowed, despite their status as outsiders of Chinese culture and the fact that he did not speak the language at all. I was attracted to the photojournalism that my house achieved in Chinatown.

Bossian, who was doing public relations, may not have done a “serious comparative analysis” job between the Jewish and Chinese communities (interest in Chinatown when he pressed the kung fu movie). I was first stimulated). But through his photographs, he immortalized the Quarteyian aspect of life shared by immigrant communities across New York — community celebrations, pride and fear of being “others,” and anonymity. In contrast to the atmosphere of a small town in Ethnic Neighborhood, in the atmosphere of a big city. 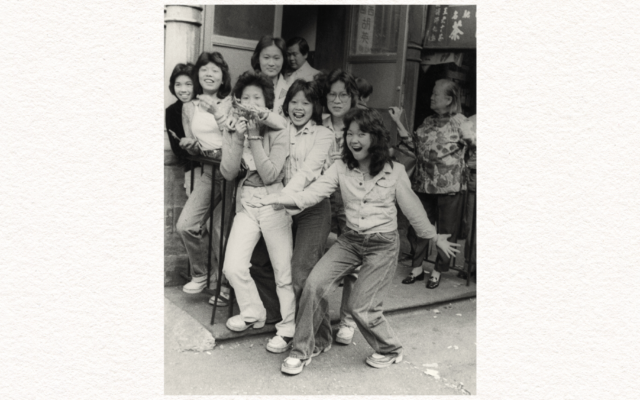 Emile Bosian captured the joys of everyday life of all ages in his thousands of photographs. Above, a group of teenage girls are laughing and posing for shots. (Provided by Emile Bocian, Museum of Chinese in America)

Bossian was relatively unknown while working in Chinatown, but his photographs show attention to detail and enthusiasm for the liveliness of New York’s niche community. Co-curator Chu and Lauren Gilbert, senior manager of public services at the Jewish History Center, have several documents about his life illuminating his character, including communication with mentalist and magician Chan Canasta. Was able to be recovered. Polish Jewish family.

In his letter, Bossian explains that he made up the story of being born in Kaifen, a Chinese city that was once the home of a small Jewish community, as a joke and to win the trust of the locals. increase. “As a veteran spokeswoman, Bossian never allowed the facts to get in the way of a good story,” the exhibit advertises.

In a 1976 letter to Canasta, Bossian humorously compares his observations of the Chinese and Jewish New Yorkers. “I have become an expert in Chinese affairs,” he writes. “I know more Chinese groups than the average Chinese in New York. It’s easy. I think it’s Jewish. There are Fifth Avenue, Park Avenue, Westside, Uptown, Westchester Jews. The same is true for Chinese. Chinese on Fifth Avenue do not talk to “downtown” Chinese. Don’t let the Jews in Uptown talk to the Jews in the Lower East Side … Anyway, this is the first time a New York Chinese in “Downtown” has a professional press to help them. “

The “impossible photojournalist” also saved Bosian’s work. On January 23, 2020, MOCA’s historic building at 70 Mulberry Street was set on fire. Hundreds of artifacts were damaged, but at the Jewish History Center, which was moved in anticipation of the exhibition as part of its digitization, the Bossian photo box was safe.

(With the support of the community and thorough conservation efforts, 95% of the materials from the museum were finally recovered, Chu said.) 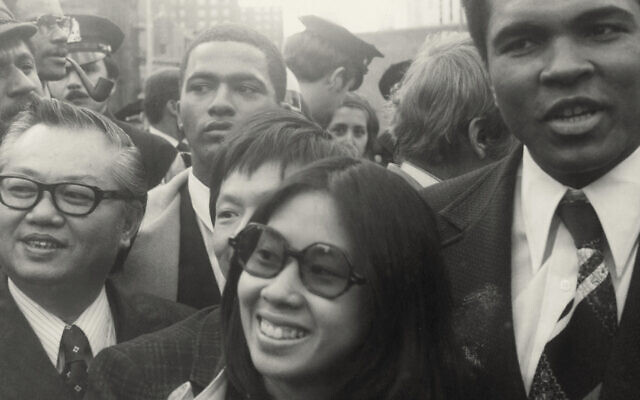 Emile Bossian captured the excitement of the neighborhood and took many shots, such as when Muhammad Ali was honored in Chinatown, New York on December 9, 1974. (Emile Bosian, Jewish History Center / Provided by JTA)

The fire and the subsequent pandemic delayed the opening of the exhibition. However, Chu and Gilbert created a large, interactive online exhibition and photo gallery in December 2020. It’s still online.

“It was great,” Gilbert said during Jewish Week in New York. “Much more people were able to access these photos than they were in the actual picture, and could fill so many gaps in knowledge from those who contact us.”

In one such example, Bocian was filming a double date for two young couples. A person who saw it online contacted Gilbert and informed her that one of her couples eventually got married and lived her long life.

“No one wanted to save them, so I wonder how many other materials and collections will be lost forever,” Chu said. “I think this show has given people a chance to record their community.”

The “Unlikely Photojournalist” is currently on display at the Jewish History Center on 15 W. 16th St. The exhibition was recently extended until March 21st.

You are an avid reader

That’s why we started The Times of Israel 10 years ago-to provide discerning readers like you with the must-read coverage of the Israeli and Jewish world.

Now, I have a request. Unlike other media outlets, we do not have paywalls. However, the journalism we do is expensive, so please support our work by inviting and participating readers who have become important to The Times of Israel. The Times of Israel Community.

Thank you,
David Horowitz, Founding Editor of The Times of Israel