You may know JJ Gonson. You may have seen her ubiquitous photo of Kurt Cobain floating around in the internet ether. You may have attended her music venue the ONCE Lounge and Ballroom, or you may have sampled some of her food from her catering company. Anyway, I became more familiar with the punk/rock/grunge scene after chatting with her at my favorite hangout, the Bloc 11 Café, where she has an exhibition of her work.

JJ Gonson works as a caterer, to make the daily nut. She told me she first got her footing in Somerville at Kitchen, Inc., located on Somerville Ave. was located, across from where Target is now. Then she moves to 156 Highland Ave to another kitchen/catering space.

As for her time running the ONCE Ballroom and Lounge, she told me a host of musicians performed there. The likes of Amanda Palmer, Phoebe Bridgers, Mitszi, many heavy metal bands hit the stage, just to name a few. The ambitious Gonson told me, “I also run a Somerville-based summer music series at the Boynton Yards development. We use their large parking lot for our venue. People hear bands play all day and have a good time.” 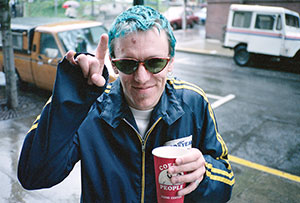 During Gonson’s college years in the 80s, she was always at clubs like the Rat in Kenmore Square, TT the Bear, in Central Square, Cambridge, and many others. The bands that played there were her friends, and she took pictures of them in action. Her work has been appreciated and bought by publications such as The Boston Globe, The Boston Phoenix, Boston Rockand others.

In terms of her photography, which began when she was a student at the Massachusetts College of Art, she said, “Photographs are about memory, what we hold on to, what we choose to preserve.” And indeed, Gonson is a curator of her own memory.

One of the many musicians Gonson befriended and photographed was Elliot Smith. Smith was an award-winning songwriter with a melancholic sound. He has been part of the vibrant music milieu of Portland, Oregon, and has released some highly influential albums. Gonson recalled: “I was working in a cafe in Portland, where I met some of Smith’s friends. I ended up going to the second concert he ever did. His talent just oozed out of him, his voice, his mastery of the guitar, etc.” Gonson said she did the cover for his first album, and they were good friends for 2 or 3 years. Gonson reflected: “We ended up moving to different places and lost touch. He later committed suicide. He came from a difficult and abusive background. I’m still in touch with his sister.”

Regarding her show at the Bloc, she explained: “A lot of my photos are in ‘visual storage’. Some are in record stores, and some are stored at a production company. So I took a lot of them to hang on the walls at to exhibit the Block.

Gonson pointed out a portrait she did of Billy Ruane, a champion of the Boston music scene, who died about 12 years ago. He was responsible for bringing the music scene to the Middle East, a famous place in Cambridge, MA. Like Smith, Ruane was troubled and suffered from alcoholism and manic depression, hence his early death at 52.

As we looked around, said cafe Gonson had pictures of Henry Rollins, Elliot Smith, Kurt Cobain and many more on the walls. There was an intensity to these photos that made you stop and look.

Gonson does not make a living from her collection of photography. She said: “My photos are all over the internet. To track them all down would be a huge project, time consuming and not a very profitable one.” Her photo of Kurt Cobain, for example, was used by thousands on the Internet, Gonson laughed: “They even made tattoos of that photo.”

Gonson hopes that her passion will eventually be her only life. But until then, she will provide delicious food, and keep an eye, or lens out for another great shot.