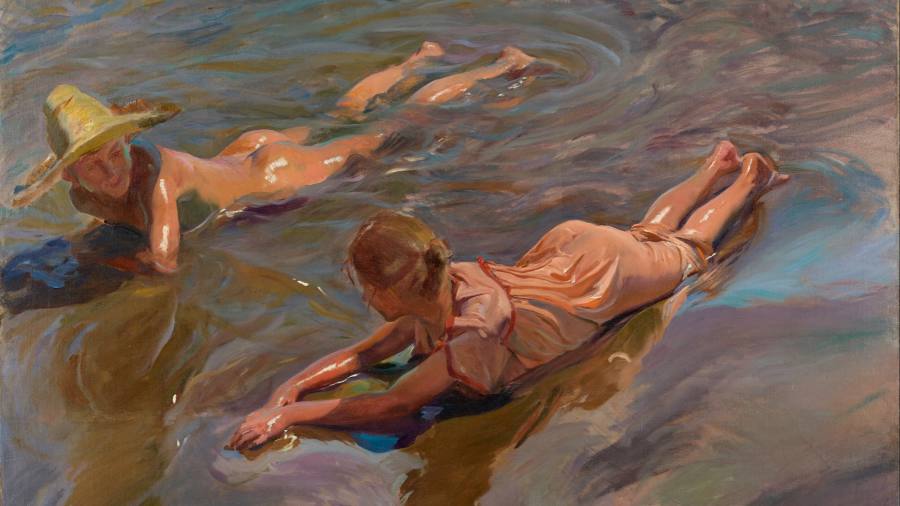 “And I remember Spain,” wrote the Irish poet Louis MacNeice, “tripper” in the rain in 1938 and remembered “sherry, shellfish, omelettes . . . fret stone that the Moor/Het chiseled for the effects of sun and shade. . . churches full of saints. . . Covered with gilt and dimly lit with candles. . . powerful or banal/Monuments of wealth or oppression . . . the Escorial/Cold forever inside like the heart of Philip . . . and in the Prado half/White, princes looked at the cloth they paid for.”

Art has always defined foreigners’ view of Spain. The land evoked in MacNeice’s “Autumn Journal”, its “glory veneered and varnished”, is the one that continues to burst into light and color in the Royal Academy’s moving exhibition Spain and the Spanish world, a selection of 150 works on loan from New York’s Hispanic Society Museum & Library. They were collected between 1900 and 1930 by Archer Huntington, heir to a railroad fortune and a man on the run, who sought refuge in exotic underdeveloped Spain from the new American industrial society his family had helped create.

Huntington was a precocious 12-year-old touring Europe with his parents when he heard George Borrow’s The Zincali: An Account of the Gypsies of Spain (1843) in an English bookstore and fell in love with the idea of ​​the country. As a teenager he learned Spanish and later Arabic, then traveled through Spain in the 1890s, supervised an archaeological dig in Seville, befriended bibliophiles and became an expert on manuscripts, ceramics and glassware – although he told his mother said: “I buy no pictures in Spain, with that foolish sentimental feeling of disturbing such birds of paradise in their perches. . . . to Spain I do not go as a plunderer.”

But via dealers in Paris and London, he profited from the exchange of Europe’s Old Masters for America’s new money and prided himself that he “could have told where any famous painting of Spanish origin could be found . . . I’ve seen most of them.” A special coup went to Joseph Duveen ‘Portrait of a Little Girl’, one of only two depictions by Velázquez of non-royal children and among his most naturalistic, spontaneous, joyous paintings. The child, solemn yet smiling, her dark hair lavishly rendered with sparkling highlights, was probably the artist’s granddaughter.

The collection’s iconic piece is Goya’s “Duchess of Alba”, the “Black Duchess” dressed as a daring urbane maja, points to the words “only Goya” inscribed in the sand at her feet, which Huntington bought in Paris for $35,000. It distills a romance about Spain – the ruling aristocrat in striking pose, with fiery sash and traditional lace mantilla, standing in front of an Andalusian landscape representing her estate – while serving as a portrait of sex, power and the individual spirit resonated with Gilded Age America.

The Duchess was an immediate attraction when Huntington opened his museum in Manhattan in 1908. But just as revealing as the art historical trophies was its ethnographic focus, with a large chronological and material range – bell-shaped “Bell Beaker” Andalusian pottery from around 2000 BC; Celtiberian metalwork and jewellery; medieval Alhambra sides – and geographical span, including some of the earliest documentation of colonial Latin America.

Giovanni Vespucci’s “World Map”, the master sea chart of 1526 given to all Spanish seafarers, detailing ships, conquests and resources, is displayed in Charles V’s ornamental version. A watercolor from 1585 depicts the recent founding of Potosí, Bolivia, and its silver mines, against a mountain background with llamas and herdsmen. A map of the river Ucayali, tributary of the Amazon, illustrating local communities along its stretch, was painted by indigenous artists working with Franciscan missionaries. Juan Juárez’s “The Castas: Mestizo and Indian Produce Coyote” (1715), an uneasy portrait of a European-American father, Mexican mother and their son, reveals subregal Spain’s obsession with bloodlines and race.

Art was a channel for propaganda—political, religious, or both—on each side of the Atlantic, and some of the greatest paintings here take their drama and passion from Counter-Reformation zeal, led by El Greco’s intensely expressive, elongated “The Penitent St. Jerome” and the pyramid of four tragic figures in his “Pietà.” Paintings such as Juan Carreño de Miranda’s frothy, rococo “The Immaculate Conception” were sent to Mexico and widely copied, spreading Catholic messages and teaching European styles .

Some enterprising painters went themselves: Sebastián López de Arteaga, who emigrated from Seville to Mexico in 1640, founded a tenebrist Baroque school in his adopted home, with violent theatrical compositions exemplified by “St Michael Striking Down the Rebellious Angels”. Shortly after painting it, Artegea himself was struck in a duel and died.

Strong and heightened, Spanish realism connects many diverse productions across centuries and continents, giving the exhibition a hypnotic consistency. The psychological conflicts between the six large, hard-line figures in Ignacio Zuloaga’s “The Family of the Gypsy Bullfighter” (1903), for example, share in a secular context the grotesquerie of Ecuadorian sculptor Caspicara’s unforgettable “Four Fates of Man” (1775), multicolored wooden, glass and metal figures of a skeleton, tortured villain in hell, and souls in prayer and peace. The Gothic chorus of haloed figures staring skyward in Miguel Alcañiz’s tempera panel “The Ascension of Christ” (1422-30) resemble ancestors of the stoic Basque sailors perched on a harbor wall beneath slanting clouds in José Gutiérrez Solana’s “Mariners of Castrodiales.” stand. ” (1915-17).

Absent, the elephant not in the room, is Picasso, the artist who, from his country’s brutal realist tradition, brought about a global revolution in representational painting. Huntington never touched him. Only where works brilliantly depict customs or landscapes did he even accept hints of Modernism: the abstract decorative elements, learned from Klimt, in the sumptuous embroidered costumes in Hermenegildo Camarasa’s “Girls of Burriana” (1910-11); the clipped compositions and sharp angles of Sorolla’s beach scene “Sea idyll” (1908). This and the seven-meter gouache sketch for “Vision of Spain” (1912-19), the wraparound regional panorama commissioned from Sorolla, imbue Burlington House’s final galleries in a cheerful glow.

Huntington said he likes “Vision of Spain” because it commemorates a world “on the verge of disappearing.” His collection reveals as much about 20th-century nostalgia as it does about how a nation’s history is told through its art: a dazzling double cultural portrait.

Ten earthy bedrooms that use natural colours and textures

What price paradise? How a Mallorcan artists’ haven became ‘a ghost town’ | Spain