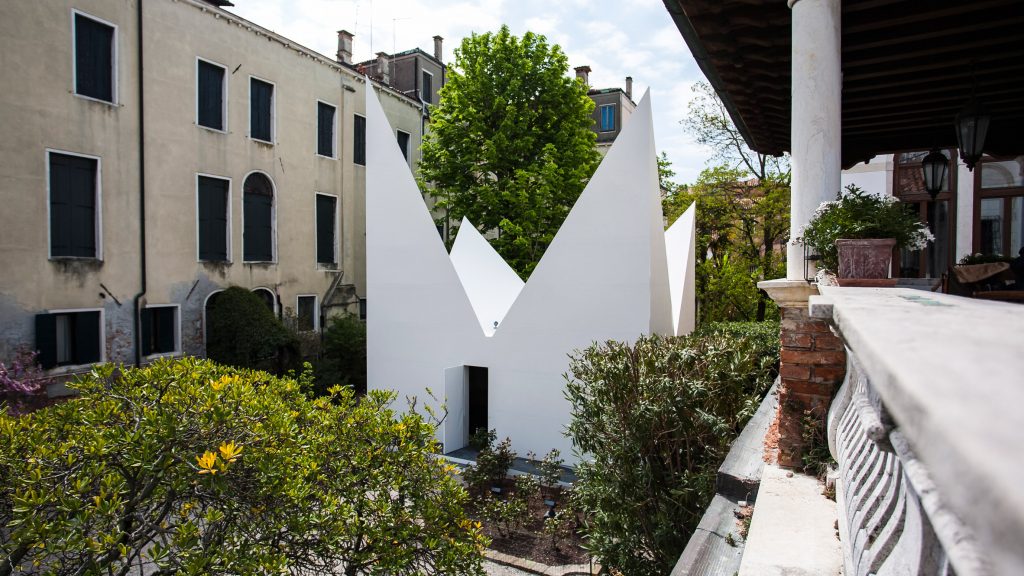 At this year’s Venetian Art Biennale, Italian studio Stefanovo Elialquitetti created a pavilion called the Hanji House, which is covered in square paper and is based on the sculpture of Korean artist Chun Kwang Young.

The Hanji House was designed by Stefanovo Elialkitetti for its location in the gardens of the Contalini Polignac Palace, a palace overlooking the Grand Canal of Venice.

It is considered to be an enlarged version of Young’s crystal sculpture, which the artist calls “paper wood architecture”, which is currently on display at the palace.

The sculptures are made using a package of thousands of folded Hange triangles, a traditional Korean paper handcrafted from the mulberry tree from which the name of the pavilion was derived.

The crown-shaped handy house, made of veneer laminated lumber (LVL), is defined by four tall, thin pyramids at each corner. One pyramid is two meters higher than the other, breaking the symmetry of shape and creating a “lighthouse”.

The entire pavilion is covered with Korean paper, creating a crisp white appearance that becomes an almost translucent beacon at night.

“The shape is reminiscent of the ancient customs of origami and tangrams, as well as traditional Korean homes based on simple geometric modularity,” he continued.

In addition to its visual connection to Young’s sculpture, the pavilion is designed as an abstract reference to the architecture surrounding Venice.

“The entire pavilion is reminiscent of the local shape, from the Gothic cathedral to the distinctive Renaissance palace that winds from the Jinghang Waterway to the interior of the island,” said the studio. 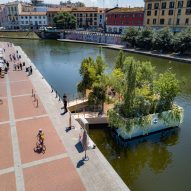 Inside the pavilion is a wooden bench where visitors can sit and watch an interactive video installation by Calvin J Lee watching a virtual rendering of Young’s Hange sculpture projected onto the wall.

The current location and use of Korean paper is intended as the “beginning of a longer journey” of the pavilion, with a structure designed to be disassembled, relocated, or filled with a variety of uses.

“Like a lightweight lantern, a Korean paper house can be folded, moved, and adapted to different situations as easily as a piece of paper.

Unless otherwise stated, the photos are by Guoyin Jiang.