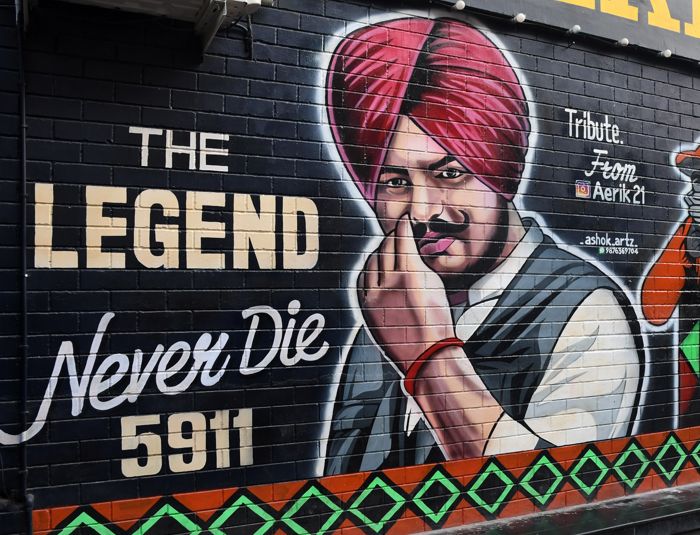 Modern architecture, greenery and urban wonder—are the most common comments made by visitors to The City Beautiful. Efforts have been made to add flavor to the cityscape in forms of visual art.

As respective administrations try to revamp Chandigarh and its neighboring cities – Panchkula and Mohali – we bring you the new additions to public art, ranging from graffiti to murals to installations. Artists and art experts also share their opinion on the recent works.

Sidhu Moosewala’s colorful portrait in Sector 23 is eye-catching, which also has the portrait of Tupac. The artist, Ashok Kumar, who goes by the name Ashok Artz, says, “I used to paint on this wall too. Since there is a liquor store nearby and many people used this wall to urinate, the owner Aerik 21 wanted to have their wall painted. Now it has become a selfie point. We change the graffiti from time to time.”

The artist has received calls from Canada, the US and the UK for commissions after his famous Sidhu Moosewala graffiti. Just opposite in Sector 36, there is another shop, Urban Desi Chai, which has lit up the empty space with another graffiti. Among the newly painted graffiti, Alliance Française de Chandigarh’s new graffiti by Brazilian-born Liliane Ortega stands out.

Newly created Sector 17 underpass became the focal point for all installations throughout the year. The exhibition to celebrate the 75th year of independence has installations by students of the Government College of Art and the Chandigarh College of Architecture, namely Mimansa, Yashi Garg, Bhanu Shirvastav and Shweta Kumari.

The art and the experts

Bheem Malhotra, Chairman, Chandigarh Lalit Kala Akademi, is the artist behind the recently installed mural of APJ Abdul Kalam (72 feet height) at Chandigarh University, Mohali. He says: “It was the brainchild of the University’s chancellor, Satnam Singh Sandhu. This is a 3D mural made of ceramic tiles and executed by Sunil Mathur. After choosing a portrait of Kalam sahib, the challenge was to execute it with proper color balancing.”

Does Chandigarh offer the right platform for such art pieces? Malhotra says, “Graffiti is not suitable for the architecture of Chandigarh because it weathers over time and can be easily tampered with. When it’s done with a proper thought process, with durability in mind, then public art only makes sense.”

Diwan Manna, President, Punjab Lalit Kala Akademi also shares the same opinion and shares his reservations about murals. “Any art project depends on the artist’s maturity, skills and ideas, or it can be a permanent eyesore. So, the administration should bring artists, architectures, cultural experts under one roof before any public art is executed, as public art represents the city, its aspirations and cultural outlets. Every public art must be commissioned work administered by a team and must be in tune with the environment.” He also feels that the recent installation at Matka Chowk has in a way blocked the view of the Shivalik hills and calls it a bad sculpture.

Haryana’s Panchkula has been redecorated. One can see the colorful walls while driving around in the daylight and at night the city glows with permanent installations of decorative lights. Mayor Kulbhushan Goyal says, “When our initiative to install decorative lights in 2021 was appreciated, we made it permanent on all major roundabouts and roads now glowing in Tricolor to celebrate 75 years of independence. The wall art has helped us tell stories of bravery and sacrifice, sports heroes and freedom fighters. We also try to inspire citizens to adopt cleanliness. The citizen response led us to add 50,000 square meters of area to the existing one lakh square feet that started during the pandemic. “