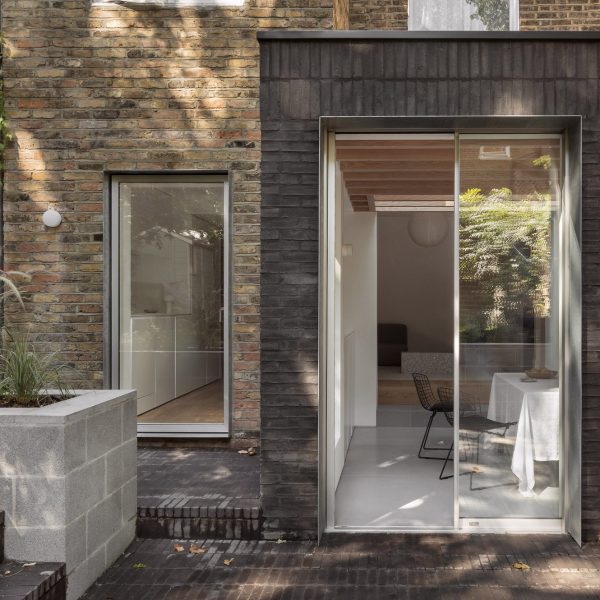 Housed in a Georgian townhouse in the De Beauvoir area of ​​Hackney, London and Oxford-based Studio Hallett. Ike was tasked with improving the apartment’s connection to the rear, south-facing garden.

The extension, called DB Apartment, left the front of the house largely unchanged, while two new volumes clad in dark brickwork were added at the rear, opening onto a stepped patio.

In the apartment’s previously isolated kitchen, an internal opening looks through to the newly created dining room, bringing views and natural light deep into the plan through large windows and skylights.

“With a tight construction cost, the project matches and redefines the property by introducing two modest volumes that simultaneously connect and harmonize the layout and aesthetics,” explained the studio. 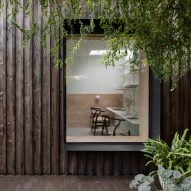 The living room steps down into the extension, where a dining area sits under exposed wooden beams framing a skylight, with a plywood paneled wall and built-in bench providing extra seating for the dining story.

A serving area sits within the opening to the adjacent kitchen, which has been refurbished with all-white appliances and cupboards, and on the opposite side houses the smaller extension volume of utility space.

Each of the three spaces along the rear of the house has an almost full-height pocket glass sliding door, chosen to keep the obstructions to the view to an absolute minimum.

These glass doors are framed in deep reveals of raw galvanized steel that complement the dark brick used for the extension’s exterior and the garden patio.

“The design responds to its context as a balance between the raw and weighty external appearance as opposed to the warm and minimal internal aesthetic,” explained the studio.

“The junctions between these elements are highlighted by galvanized steel thresholds, which in themselves are light, unexpected and beautifully raw,” it continued.

Studio Hallet Ike was founded in 2018 by Madeleine Ike and Jonty Hallett.

Previous projects by the practice include another extension in London which aimed to maximize a limited space and budget and was clad in black larch planks.

Other recent De Beauvoir extensions include a townhouse owned by a musician and furniture designer.

The photography is by Ståle Eriksen.

Micro Apartments Are the Best Thing to Happen to the Planet