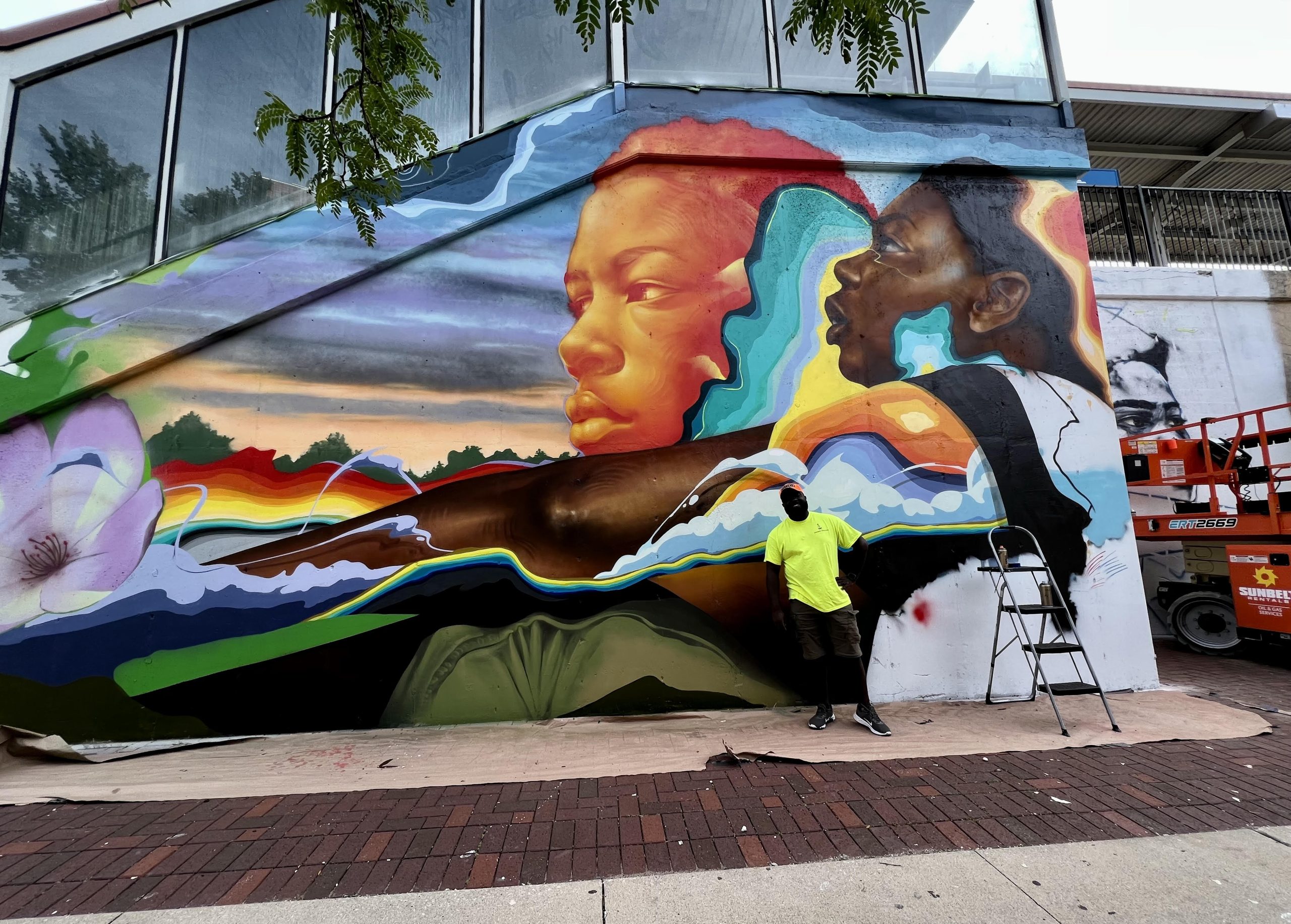 Four new murals brighten up our fair city, and the first was completed in early July at 1815 Norwood Court.

I’ve never heard of Norwood Court, but it’s the short cul-de-sac along the west side of the tracks, the one that runs from Lyons to Clark Street, accessed by turning east from Ridge Avenue onto Clark or coming from the south. via Oak Avenue.

The composition is one of abstract shapes in bright colors – the only distraction is a large, bright red Coke Studio billboard behind the utility wires above the mural. (Who put it there, anyway?) The mural was financed by Trulee Co.

Trulee Evanston is the new senior living building overlooking the Norwood Court mural. Like several other residential buildings near the railway, a mural certainly brightens the residents’ view.

Molly Z has another mural in Evanston, on the north side of the Grove Street viaduct, at Elmwood Avenue called Fluent foundations. The title is a sly reference to the blossom that comes through viaduct walls all over the city. This mural was painted in 2019 with the help of teenagers from the Evanston Township High School Fine Arts department.

The “Custer Street Oasis” is getting a bright, new wrap-around-the-Metra embankment mural. Funded by the Main-Dempster Mile, it starts under the viaduct on Main Street and moves west, moves onto the off-ramp and ends about where the trees begin.

The artist, Brett Whitacre, lives in Rockford but has murals all over Chicago, Milwaukee, Madison, Rockford and 11 in Norwalk, Connecticut, where he was hired to liven up a “dying” shopping center.

Here in Evanston, he’s working with a college intern, also from Rockford, who needs 200 hours of “art-related anything” this summer. Whitacre even works at night, by the light of a large street lamp on Custer Street.

Whitacre says “I do things that are fun. I’m not too deep – I want the majority of people to like my murals.”

He becomes proficient with spray paint and uses an imported acrylic that is archival and high in pigment content. The paint is made in Barcelona, ​​Spain, but is called Montana, of all things. He sticks his shapes before spraying them, in the manner of a stencil. A delightful flower garden adjacent to the mural was planted throughout the Main-Dempster mile.

Artist Max Sansing is painting a large mural in the Metra interchange north of Davis Street. It doesn’t have a name yet, but the theme came to him as he experienced, read and thought about the past rough two years and how many people have turned to nature to ease their anxiety. He researched plants native to Evanston and the painted plants will extend to the bottom of the Metra stairs. Downtown Evanston is funding the mural.

Sansing started by painting graffiti murals with friends. He then attended the American Academy of Art in Chicago. He has been painting murals for over 20 years now, has worked with CPAG (the Chicago Mural Arts Project) and has traveled to Sweden, the Middle East and Puerto Rico to paint them. He says people there know him when he arrives, and that’s exciting for him.

His sketch was not projected onto the wall, a common way to lay out a mural (at night, of course). To enlarge the heads to such a large size, Sansing uses a unique system of landmarks rather than a grid. He says it takes a lot of planning.

There will be a UV coating on the mural when it’s finished, he told me, which helps maintain colors over time. Red ones in particular can fade from the sun, he explained.

Sansing uses the same spray paint that Brett Whitacre uses, although his Montanas are made in Germany, he says. He likes to do murals, as “the artist has the benefit of doing something lasting.” And this one will last longer than usual because it’s not a retaining wall with a potential outflow problem.

EMAP, the Evanston Mural Arts Project is the brainchild of Lea Pinsky and Dustin Harris, two Evanston artists. They started painting murals together in 2005 and formed a collaboration called Mix Masters.

As such, they have led many large-scale mural projects around Chicago. They also ran the “Mile of Murals” in Rogers Park for seven years, along the CTA Red Line from Estes Avenue to Pratt Boulevard.

In 2017, Pinsky and Harris created EMAP specifically to beautify spaces in Evanston with murals. They organized murals here for both commercial and private purposes—finding funding, recruiting artists and volunteers (sometimes even painting themselves), and overseeing logistics like legal permits (often hard to get, from Metra and CTA, but “not this time,” says Pinsky.) They also handle coordination with the community, traffic barriers and Arts Council communications.

A third mural is planned for the east wall of the building that houses Curt’s Café, but next to Swan Lake Cleaners, at 2920 Central Street, on the corner of Lincolnwood Drive. The artist will be Beverly Sholo, a mixed-media artist and experienced muralist who lives north of Chicago. The design is abstract and draws inspiration from workshops with the Curt’s students who expressed interest in a surreal design that had the feeling of dreaming and traveling. Sholo recently completed an interior mural project at Curt’s Café in Highland Park.

It is a pleasure to see new works of art appear in Evanston. It’s definitely been a while.