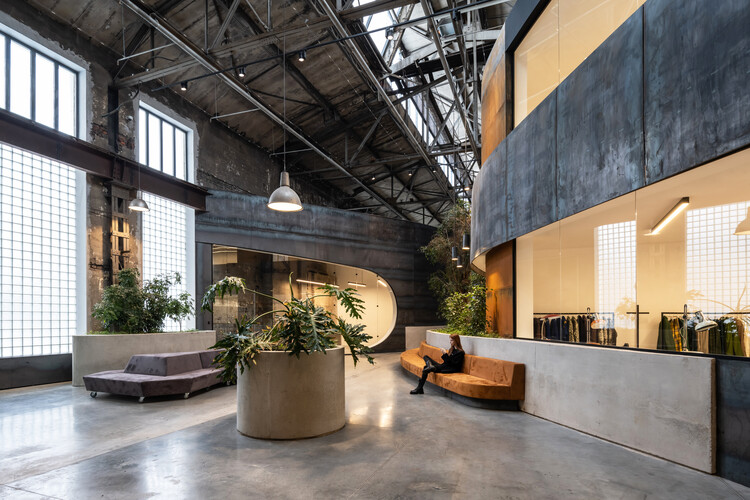 A description of the text provided by the architect. The Spellmetalle Cultural and Business Center, created on the territory of the Birdin Institute of Ferrous Metallurgy, just off the banks of the Yauza River, opened in late 2021. The Spellmetalle complex has numerous offices, cafes and restaurants of different sizes and layouts. , And what is called a “workshop” – a monument to Stalinist architecture, this new project will serve as a representative lobby and major public space for the entire complex.

The development of this project was carried out by a team led by Alexei Kapitanov, famous in Moscow for the project to revitalize the former bread factory and Krasnaya Strela housing complex in Frevo Zavod 9. The reinterpretation of the workshop building and the creation of a 2,000-square-meter multifunctional lobby was the work of architect Maria Yasco. He designed her based on a dramatic composition of brutal materials and volumes with deliberately softened plasticity. A word about the name of Spellmetalle itself: This is a legacy of the 1990s when part of the laboratory building was privatized and began commercialization.

At that time, the new owner came up with the sharp name of Spell Metalle. The metallurgical theme that was originally unique to this place has been recreated in a new tone, so to speak. When the Alexey Kapitanov team took over the site, they decided to keep the name. Formalized as an element of the Periodic Table, this name has become a well-known brand for new projects.

Maria Yasko faced the challenge of organically integrating offices, retail facilities, coffee shops, several public meeting rooms, and coworking places all under one roof. All of this had to fit into a rectangular building with the characteristic rhythm of a vertical pylon that separates the window openings lined with glass blocks. By the way, the glass blocks have been replaced by modern ones that retain the original scale of these elements, but instead of the green colored glass, the new blocks are to provide sunlight to the refurbished space. It’s completely transparent.

The concrete structure and the metal roof truss itself are preserved to the maximum extent possible. They will be cleaned up and displayed in their original brutal form. From the beginning, the layout design of the space was heavily influenced by the client’s desire to create two levels here in a small office that could be rented by various workshops, creative teams and agencies.

Also, since the height from the floor to the truss reaches about 7 meters, it is natural to create a mezzanine floor where the required number of workshops can be placed. It retains the original perception of space and light flowing through a huge stained glass window. Maria Yasco gave this mezzanine a particularly emphasized and smooth outline. It is essentially a wave flowing along the rear façade, with several round emblems that bend inward towards the workshop space. And, of course, the office itself is located along the wall, but in front of it there is a passageway, firstly, quite long, and secondly, due to the plasticity proposed by the architect. A workshop space that serves as a spectacular route.

From there, you’ll find a perfect view of the roof trusses and everything on the first level. The total length of the radial sidewalk is about 140 meters. On the ground floor, the wave theme is taken up by the volume of three separate office units that the architect gave similar plasticity. From the side, these are virtually the same mountain and are now forming visual connections with more complex routes at this level. Further developments of this same theme are the volume of conference rooms cast from concrete using distorted formwork along two planes, and round concrete planters, museumized machines from the metallurgical past of research. You can find it on a round table with a laboratory, and round comfort chairs and sofas.

However, the space here is so vast that it was strange to decorate it with only soft, rounded elements. It’s too big for a single technique, so architects treat it as a stage of very contrasting dialogue. Soft furniture (both material and shape) is juxtaposed with rectangular tables and chairs (actually covered with sheet metal) carved from metal and the brutal texture of the original concrete structure – The delicate surface of building concrete, the cladding of hot-rolled steel – and the rich greenery.

Corten steel was also used for the lining of the inner wall. It is interesting to note that this steel has been oxidized and “aged” from place to place. This was a way to save money and get a more expressive and diverse surface. The color scheme of this space was played accordingly: it is dominated by shades of gray, brown, and green. The only exception is the bright red corner of the Chelovek-Parokhod coffee shop. It is clearly visible from anywhere in the space and acts as a landmark, such as marking the front door of the next building. All of this together form a very charismatic space, on the one hand its content and character are remarkably modern, and on the other hand it is very clever and honest with respect to its past.