Technique transforms dilapidated flats into The Den house in Scotland 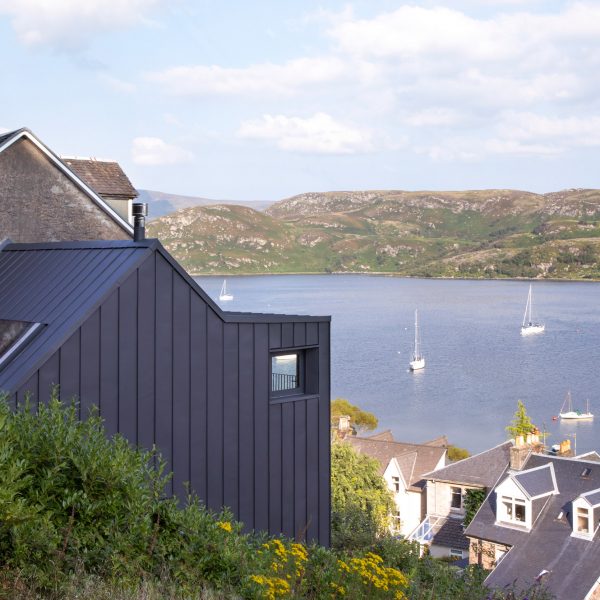 Architecture studio Technique combined a pair of flats next to a traditional stone house in Scotland to create The Den, a one-bedroom residence clad in a black metal “jacket”.

The Den occupies a hillside site in the village of Tighnabruaich, with a panoramic view over a narrow sea channel known as the Kyles of Bute.

Glasgow Studio Technique was tasked with connecting two small flats on different levels to create a residence and studio with a 90 square meter footprint.

The studio collaborated on the project with clients Paul Stallan of Stallan-Brand Architects and his wife Seonaid, whose family has owned the loft apartment since the 1960s.

The two apartments were in a small cottage adjoining a larger house built in the 1870s. When Seonaid was offered an opportunity to purchase the lower property, this led to the idea of ​​uniting both apartments to create a single and more practical residence.

During the process of opening up the dilapidated spaces, the original stone walls and structural woodwork were exposed. This resulted in a project focused on preservation and playful modernization.

“A rich palette of materials that have aged over time has been revealed, creating unique spatial qualities,” said studio founder Jamie Ross.

“The clients’ ambition to retain this character and atmosphere formed a core part of the new design.”

While repairs were made to The Den’s existing stonework, much of its wooden floor beams, lintels and roof structure had to be replaced.

The rotten wooden elements were replaced with concrete and steel, and a new roof was added, which provided an opportunity to introduce openings with improved views of the surroundings. 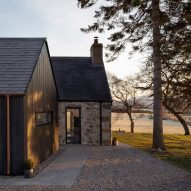 Technik also covered the existing building with a new weatherproof shell. An external timber frame, insulation and a weatherproof metal cladding form what the studio described as an external “jacket”, allowing the original stonework to be exposed internally.

The Den’s steel cladding has a textured powder-coated finish to help it withstand the harsh sea climate and creates a bold contrast to the village’s Victorian architecture.

“The juxtaposition of old and new, a unique sculptural form and expert craftsmanship combine to create a unique contemporary home that reflects the clients’ creativity and personalities,” Ross added.

A bi-folding door with a Juliette balcony and window seat was introduced on the south side of the original attic flat, while a frameless north-facing skylight overlooks the woodland canopy behind the dwelling.

Internally, the architects have created open-plan living spaces that feel bright and spacious, despite the compact footprint.

“To achieve this, we thought of the stairs, kitchen, bathroom and storage as pieces of furniture within a larger space rather than as individual rooms,” explained Ross.

“It is designed in a sculptural plywood volume that winds between all three floors and wraps around the kitchen.”

The Den’s plywood elements extend from the downstairs en-suite bedroom to the upper ground floor where the kitchen, dining area and lounge are located, before opening onto the mezzanine studio and living area.

Birch plywood creates a contemporary contrast to the restored stone walls and old floorboards, with other materials including modern gray brick contributing to a rich and layered palette.

The new steel elements are left exposed and are clearly distinguished from the original structure by their red oxide painted finish, which is also used on the handrail.

On the mezzanine level, new gray brick borders the rough stone of the original gable, emphasizing the contrast between old and new.

The Den is one of 20 houses longlisted to win RIBA’s House of the Year for 2022.

The photography is by Dapple Photography.