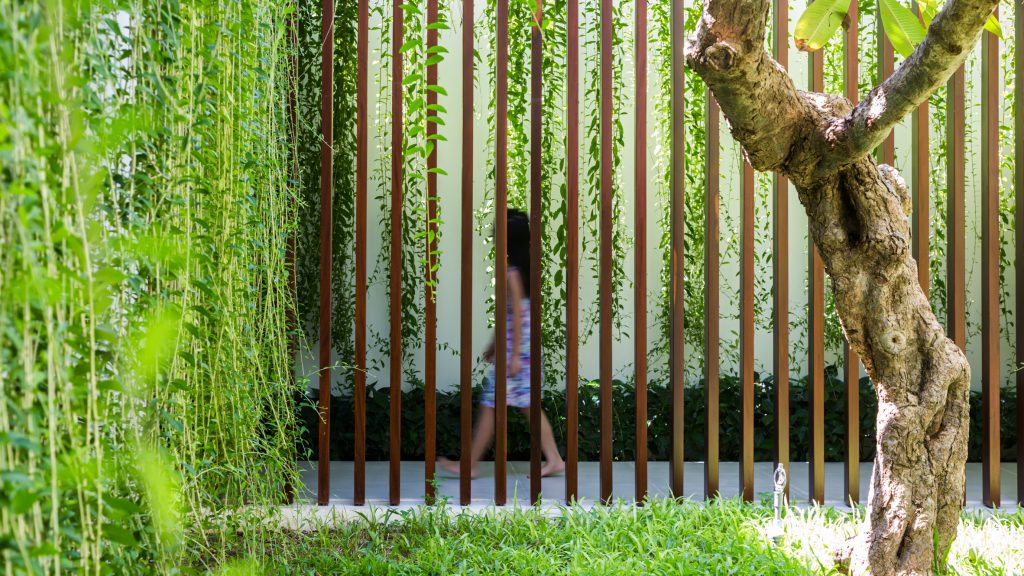 Biophilic design, which aims to create spaces in which people are more connected to nature, is becoming increasingly popular. In this lookbook, we have collected 10 interiors with soothing biophilic designs.

The design principle can be used in architecture and interior design through the use of natural materials, as well as the integration of more natural light and green plants.

The 10 projects in this lookbook, ranging from a Japanese house with decorative scaffolding to an Italian house with an indoor Ficus tree, show how biophilic design has been used in projects around the world.

This is the latest in our lookbooks series, which provides visual inspiration from Dezeen’s archive. For more inspiration see past lookbooks featuring colorful 1970s interiors, innovative stone furniture and interiors designed with the Color of the Year.

Welcome to the jungle, Australia by CplusC Architectural Workshop

The Welcome to the Jungle house in Sydney was designed by the architecture studio CplusC Architectural Workshop for its director, Clinton Cole.

Made partly of recycled materials, the building is designed as an experiment in sustainable urban living and features a rooftop vegetable garden as well as an aquaponics system containing edible fish, allowing its residents to live even in the city. to live in close connection with nature.

Learn more about Welcome to the Jungle ›

This Japanese house may look industrial with its unusual permanent scaffolding. But designer Suzuko Yamada effectively brought its residents closer to the environment by creating the steel structure, which allows them to walk straight out to the garden on the first floor.

On the second floor, two steel platforms form balconies filled with green plants, while the house’s 34 windows of various sizes let in plenty of natural light.

Vietnam’s wall house is made of hole-pierced bricks and has a central atrium that gives the house a courtyard-like feel. Ho Chi Minh City-based CTA added leafy green plants and trees around the periphery of the room to make it feel almost like a garden.

By using the hole-pierced bricks and adding lots of light and green plants, the studio hoped to create a house that would be able to “breathe by itself 24/7”, it said, and thus improving the home’s air quality.

Perkins+Will’s drew on biophilic design principles when creating this house in Ribeirão Preto, a city in southeastern Brazil.

It features retractable glass walls that open the interior to the exterior, as well as tactile wooden screens and a verdant green roof.

A series of elevated gardens function as a natural cooling system in Bat Trang House, which has an exterior of ceramic bricks designed to function as a perforated skin.

Gaps in the ceramic shell function as air holes. It circulates air through the house, which also has trees, bushes and other plants peeking through the gaps, creating a second layer of “buffer zone” that cools the interior.

This cooperative housing project was designed by architect Tsukasa Ono to have a positive impact on its natural environment. Ono used a principle he calls “regenerative architecture” to reframe the relationship between human habitation and nature.

The Greenary, Italy, by Carlo Ratti Associati and Italo Rota

The Greenary’s living space centers around a 10 meter tall Ficus tree, which designers Carlo Ratti and Italo Rota added to help “blur the boundaries between the natural and the artificial”.

The house, located in the countryside outside Parma, was designed as a “forever home” in a farmhouse and granary. A fully glazed south wall lets plenty of light into the interior and shows the tree from the outside.

Learn more about The Greenary ›

This house in Unanderra, Australia, was given an angular addition by architect Alexander Symes. It has living spaces lined with wood and leads to a terrace set in the canopy of a large tree.

Green plants and a brown and brown color palette reinforce the feeling of being close to nature in the living area.

“Sustainability is at the heart of the project – embodied between the natural material palette, high performance design and strong biophilic connection,” said Symes.

The Drawers House has been designed to maximize the connection with the outdoors while maintaining privacy for its residents and has several courtyards that have been planted.

The white rendered walls are also covered with plants to enhance the feeling of immersion in nature, while a corridor is decorated with a wall of creepers that extends the length of the site.

Learn more about The Drawers House ›

Studio Bark built The Cork Studio almost entirely from cork, a natural material that can be completely recycled, reused or composted.

The building was made from discarded pellets from a wine cork manufacturer and was built around an existing sycamore tree that grew on the site, giving the interior a cozy treehouse feel.

Learn more about The Cork Studio ›

This is the latest in our lookbooks series, which provides visual inspiration from Dezeen’s archive. For more inspiration see past lookbooks featuring colorful 1970s interiors, innovative stone furniture and interiors designed with the Color of the Year.