The mysteries of Christmas shine in the National Gallery’s paintings 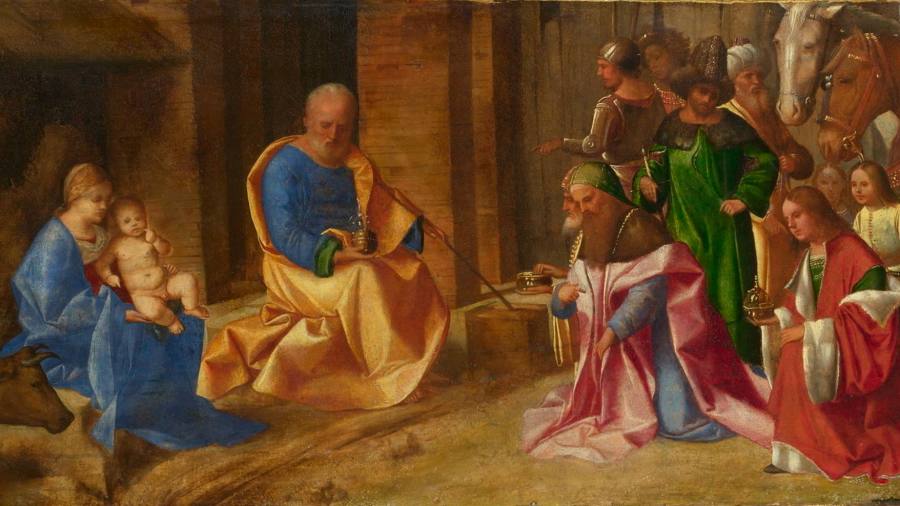 “But my dear Sebastian, you cannot seriously believe it? . . . I mean about Christmas and the star and the three kings and the ox and the donkey.”

“But you can’t believe things because it’s a beautiful idea.”

About a third of the paintings in the National Gallery depict Christian subjects, and most need to be unpacked for today’s audiences. But the “sweet idea” of the Nativity and Adoration is immediately intelligible—it is indeed through paintings that the narrative is codified and its details become known. The Gospels do not mention how many Magi visited or describe Joseph; it is painters who have permanently formulated the three kings, made one of them black and cast Joseph as old, bearded, awkward and impotent — the comic twist.

Whatever you believe, how this iconography unfolded is a wonderful story in itself, and the National Gallery through centuries of wildly imaginative Christmas paintings is beautifully able to tell it.

His oldest picture, Margarito d’Arezzo’s “The Virgin Enthroned” (1263-64), a fragile tempera panel rarely shown, includes a small Nativity in a grotto where a reclining Mary, dressed in blue (the most expensive pigment), look at the baby. But the subject did not become prominent until the later 15th century, when Renaissance artists grasped its great potential: for verisimilitude, emotional intensity, decoration, even political messages.

Already in the 1470s-1490s comes tremendous diversity in approach according to regional context, creative sensibility, clients’ demands. Haarlem painter Geertgen to Sint Jans’s small nocturne “Nativity” portrays the pale-faced Mary as empty, deeply awestruck as any new mother, shining in the light radiating from her baby, while everyone else recedes into the darkness. In Milan, Bramantino’s great architectural “Adoration” places a regal Mary in a dazzling geometry of stone cornices and doors. Botticelli’s parade of fashionable Florentines converging from opposite sides in his “Adoration” tondo was painted when the Medici staged Epiphany processions as displays of power of harmonious rule.

Giorgione in 1506 brings glowing Venetian color: the holy family in brilliant ultramarine and gold, their visitors a game of warm chromatic rhythms. In Ferrara in 1527, the eccentric Dosso Dossi represented the kings under a huge crimson moon in conflicting hues and distorted postures, as if struggling to understand the miracle before them. By 1633, Poussin’s “Adoration of the Shepherds” feels secular: a pastoral Arcadia in nostalgic copper-orange, the flowing drapery, marble columns, classy figures filled with longing for antiquity.

Amid this richness is one of the most affecting Nativity scenes, Piero della Francesca’s intimate, calm, spare version from the 1480s. After a three-year restoration, it returns, in what the gallery calls its “Christmas gift to the nation”, to hang alone in a small room, recreating as closely as possible the private sacred environment in Piero’s house in Borgo Sansepolcro for which it was designed.

An aura of mystery draws you in immediately. Posed in front of a dilapidated barn, the figures are static and oddly cast with shadows. Angels strum stringless lutes. The bright Virgo is ethereal. A single magpie investigates everything. The light over the tableau of characters and beige-green Tuscan hills and towers is crystalline, yet subdued.

As often with Piero, an independent other world is conjured up, and within it a silent center: Mary’s introspective silence. Kneeling between the gang of angels and the ruddy shepherds grouped with Joseph, sitting inelegantly on a donkey’s saddle and looking away, she joins divine and mortal. The Christ Child lies on her lapis lazuli dress, stretched across the barren ground – the tangible link between mother and son.

The painting was considered unfinished until this restoration, which not only sharpened every detail, and repaired damage to one of the angel’s eyes, but also, by revealing a ray of heavenly light shining through a gap in the barn roof bars, the interpretation after the mystic. Probably influenced by St. Bridget’s vision of Mary giving birth painlessly while kneeling in prayer, a popular version in 15th-century Italy, Piero painted the supernatural as the real. His shadowless, miraculous scene, seemingly simple, is an ordered, perfect account of human existence.

To come from Piero to the surrounding galleries is to return to everyday life in its tumultuous confusion, as envisioned in Flemish art. The black king resplendently dressed in white and presenting a gleaming intricate boat atop a crystal ball – an allusion to both Christendom’s wide reach and Flemish wealth and global trade – dominates Pieter Bruegel’s “Adoration”, replete with wild, bumping figures. Jan Brueghel crammed an entire wintry city into his small glossy gouache “Adoration”, the sky crackles, the sky star-clear. Soldiers try to appease the crowds, but the news is out and people flock to the thin hut. The exotic visitor and his gift are repeated here; viewed by envious locals, he creates unease in each painting: the Brueghels are astute social commentators.

Jan Gossaert’s monumental “Adoration” always amazes, every inch animated by precious descriptions of material pleasures – treasures of goldsmiths, metalworkers, embroiderers, weavers – under a heavenly host representing the immaterial. Here, too, the black king stands out, proud, patient, breathtakingly dressed, in a composition in which every figure – from multicolored angels to dogs sniffing the pavement – is individualized within a magnificent unity.

Gossaert, the first Flemish artist to visit and learn in Rome, was an example to his countrymen. One, Bartolomeus Spranger, later uniquely fused Dutch realism and Italian mannerism; his brooding, satiny “Adoration” (1595), which resembles a court scene with balletic kings and mischievous page boys, is a piquant curiosity.

Counter-Reformation theatricality was shaping religious art by this time, led in the 17th century by Guido Reni. In his earnest, overblown five-metre “Adoration of the Shepherds” – rapt worshipers under rosy clouds of putti – the genre reaches its limits of inventiveness. Only one of Trafalgar Square’s three-count Christmas paintings dates after 1670.

Renaissance Nativity and Adorations belong to a golden moment when artists enthralled with the re-creation of nature still worked within a sacramental culture. The National Gallery contains one tremendous, enigmatic exception: in his ecstatic “Mystic Nativity,” Botticelli turned away from naturalism toward a quasi-Gothic formal pattern. Dancing angels with olive branches surround Mary and Jesus, gigantic in relation to the other figures. Joseph curled up to sleep. Little devils scurry away.

The only painting signed by Botticelli, “Mystic Nativity” bears numerous semi-legible inscriptions, which explain its creation in 1500 in the wake of “the troubles of Italy” – war and Savonarola’s religious fundamentalism. But this is a painting for all times. In his exquisite artistry, coherence is won from chaos, and on the angels’ fluttering scrolls the words sound: “On earth, peace, goodwill towards men.”