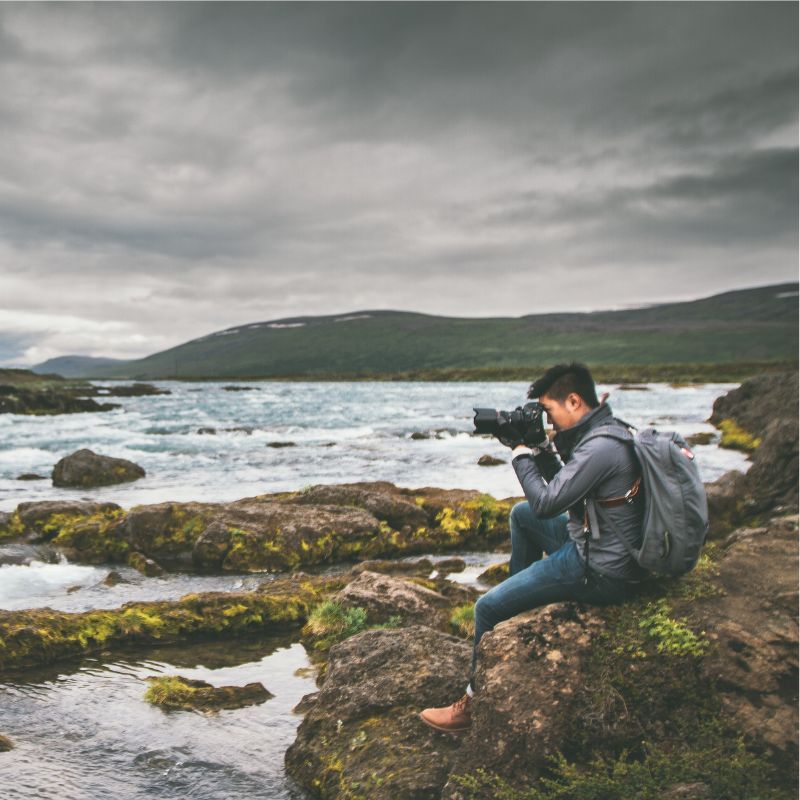 Shutterbugs not only capture the beauty of nature’s workings, but they also tell the story of the world by freezing a fleeting moment in physical or virtual form. Many such awe-inspiring works of nature photographers, displaying wild grasslands, sandy dunes and serene vistas of lush greenery against the blue sky, depict the smallest details of their surrounding environment that we often miss.

Landscapes across Asia offer nature photographers an abundance of such amazing views. From rainforests, deserts and meandering rivers to dramatic portraits of animals and birds, or close-up macro shots of their intimate moments covered in thick foliage, some of the best nature photographers in Asia bring out these captivating elements in the most stunning ways .

Browsing through their wildlife and nature photos will surely make you rush to a forest sanctuary and be one with the serene surroundings. By weaving untold stories of Mother Earth’s bounty, these photographers highlight the beauty of Asia through this visual art form.

Malaysian-born photographer Eiffel Chong draws inspiration from German photographers of the Dusseldorf School. Such is their influence that Chong mostly captures images in large formats like them.

Chong’s compelling images describe the impact humans have left on nature, portraying a contrast between new and old and the real and the imagined. In his collection Landscapes: A horizontal ligature markChong photographs abandoned fields to enhance the human impact on nature, as the beauty and resilience of the latter shines through every click.

A similar theme is seen in his series titled Seascape where calm and peaceful sea becomes his muse while an omnipresent motif of man – in the form of a boat and a pier – can be seen in every frame. While he also focuses on abandoned buildings as symbols of cyclical nature and works on abstract concepts of life and death, the way he uses the photographic medium is what sets him apart from others.

Eiffel Chong has also won a number of awards including the Excellent Photography Exhibition Award at the Xishuangbanna Photography Festival in China (2016) and AugustMan Man Of The Year 2016 (ART) in Malaysia.

Asian landscapes provide an excellent habitat for exotic wildlife to thrive, and Indian photographer Shaaz Jung’s lens takes you to the heart of this wilderness. From tracking big cats, elephants with tusks, panthers and reptiles to capturing the most majestic bird in flight, Jung’s works will remind you of the world of Mowgli, the fictional character created by Rudyard Kipling in The Jungle Book.

In search of dramatic portraits of untamed animal behavior, Jung takes viewers to the jungles of South India and East Africa. Not only that, he is a master storyteller who uses his camera to create visual narratives.

Jung’s Collection, The Jungle Book (2019), on Instagram is a reworking of Kipling’s 1894 masterpiece. The National Geographic contributor and Nikon and Samsung ambassador was inspired by the photos in the book and captured real counterparts in nature.

Born into a family that runs a photo studio in Yamagata, Japan, Kazuaki Koseki was introduced to the craft from a very young age. His calm and almost surreal click showcasing nature photos make him a prominent figure among Asia’s most famous nature photographers.

The award-winning shutterbug depicts various landscapes of Yamagata and Tohoku, as well as travels the world to create an impressive portfolio of images of mountains, waterfalls, forests and rivers. In 2021, Koseki won the Highly Honored Landscape Award at Nature’s Best Photography Asia competition – a prestigious nature photography competition on the continent.

Other awards of this nature photographer include Wildlife Photographer of the Year 2021, LensCulture Critics’ Choice 2021, BigPicture Nature world Photography Competition 2021 and Photoville FENCE 2020. He also has a book to his credit — Forest of Misty Vision (2022).

The technical quality of the image of the feared slender loris shows Kalyan Varma’s prowess in nature photography and how he manages to capture Asia’s far-reaching landscapes.

According to his official website, Varma is a “wildlife photographer, filmmaker, naturalist and explorer dedicated to documenting wildlife and environmental issues.” His works are in leading publications such as National Geographic, Nature, The Guardian, BBC Wildlife, GEO, Smithsonian, Lonely Planet and other magazines.

The co-founder of Asia’s largest nature photography festival — Nature InFocus — his photos will enchant you with amazing scenes of nature and wildlife.

Varma has also worked on a number of nature documentaries such as Wild Karnataka for the Karnataka Forest Department (2016-2017—in production), BBC India: Nature’s Wonderland series for BBC (2015) and Wildest India: Western Ghats for OffTheFence for Discovery (2011).

Taca Sui is an alum of the prestigious Central Academy of Fine Arts in Beijing, China. Later, he moved to the US in 2007 to delve deep into photography at the Rochester Institute of Technology.

The tantalizing quality in each monochrome photograph he takes – for example the one published on Sui’s website – is what makes each of the photographs unique. His collection titled Grotto Heaven (2017- ) depicts a journey he undertook through the Five Great Mountains of China.

His website describes the cave heavens as, “These cave heavens are usually located in natural caves. Unlike natural caves, however, they are distinguished by a unique feature, that is, since the 3rd century AD they have been considered to contain hidden passages that enable pilgrims to transcend time and space.”

This professional photographer captures nature and some of China’s most remote locations. Some of Taca Sui’s other famous collections include Odes (2009-2013) and Steles- Huang Yi Project (2015-2021). Works of the former are also in publications such as Chinese Photography Magazine and IMA Magazine.

One of India’s most prolific nature and wildlife photographers, Dhritiman Mukherjee describes himself as a wanderer and explorer. Pushing the boundaries, Mukherjee has traveled to some of the farthest corners of the subcontinent to capture exotic elements of nature and wildlife at their best.

From reaching the highest heights of the Himalayas in search of snow leopards to being the first photographer to click the Western tragopan in the wild, Dhritiman Mukherjee has defied all odds to capture the best photographs of some of the most challenging natural environments in the world. to get. .

Mukherjee works as an explorer and photographer for Sony and has also received a number of awards such as BBC Wildlife Photographer of the Year (2020), Kirloskar Vasundhara Mitra Award (2015), RBS Earth Heroes Award (2013) and Carl Zeiss Conservation Award ( 2013) ).

Rathika Ramaswamy, based in Chennai, is a prominent figure in the Indian wildlife photography circle. Her works take her to the countless nature reserves and sanctuaries across India. Here she photographs exotic birds, big cats and other exotic wildlife that the country boasts.

Her Instagram feed is a testament to her love and fascination for our feathered friends as she captures them in different moods and settings. With technical expertise spanning over 19 years of experience, Ramaswamy is a Nikon Professional member whose work has appeared in respected publications and earned her acclaim from far and wide.

In March 2022, Ramaswamy received the Streeshakthi Award by Sree Sankara TV, the Inidhu Environment Award in October 2018 and the ICF (International Camera Fair) Award for Outstanding Achievement and Achievements in Wildlife Photography in June 2015. Her works are in publications such as Treasures on Tiger Tracks – a bilingual wildlife guide for Kalakad Mundanthurai Tiger Reserve by Jahnavi G Pai, T.Ganesh and RM Soubadra Devy – and A Handbook to the Birds of Shangrila by Jodi Brandt & Ellen Bartee.

In 2009, Doordarshan honored her as the first female wildlife photographer in India and showcased her works in DD Chennai. In addition, Ramaswamy conducts various photography workshops for a large audience around the world.

Tapan Sheth, the winner in the wildlife category at the 2021 and 2016 Nature’s Best Photography Asia, captures dramatic portraits and captivating images of big cats, birds and the world around us.

Head over to his Instagram page, which will instantly take you to places like Gir National Park in Gujarat and other wildlife sanctuaries across the country. Each of his photographs has an enigmatic aura about them as his lens tells a unique story about the lions, tigers and other regal beasts that roam the Indian jungles.

With works appearing in publications such as DNA India, BBC Magazine, The Sun UK, Daily Mail UK and Hindustan Times, Sheth has several achievements to his credit. These include winning Through the Lens by Wildlife Reserves Singapore 2017 and Special Mention Nature in Focus 2018.

The award-winning photographer from Singapore, Robert Zhao Renhui, is counted among those shutterbugs who use this visual art to express their own feelings and adoration for nature. The author of the book A Guide to Flora and Fauna (2013) poses a question to all his readers about their belief in photography and science.

In this regard, Rehnui clicked 55 plants and animals in their own environment. At first there seems to be nothing unusual about the images, but if you study closely, you will find that they actually highlight the adverse effects that climate change and a dangerous environment are having on them.

Zhao Renhui is one of the most famous and highly recognized nature photographers who uses his art to raise awareness and encourage research. He is the recipient of the Young Artist Award in Singapore and an honorable mention at the Photo Levallois Festival, Paris, France. His works have also been shown at exhibitions around the world and are included in the collections of the Kadist Art Foundation in San Francisco, UBS Art Collection in New York and Statoil Art Collection in Norway.

Seoul-based nature photographer Jaewoon U has garnered attention for his detailed and vivid images that capture the essence of the South Korean landscape and outdoor scenes. Jaewoon’s lens zooms in on 500px and captures colorful landscapes, crystal clear lakes, seasonal foliage and more across Korea.

Browsing through his surreal photos will have you packing your bags for South Korea and embarking on a journey through one of Southeast Asia’s most pristine countries.