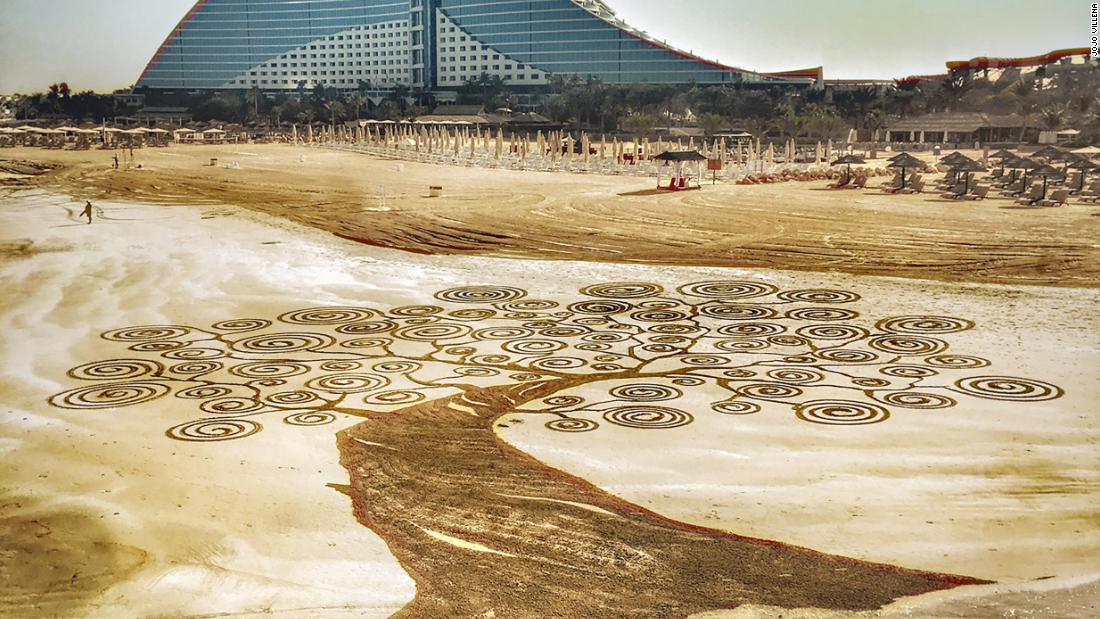 (CNN) — People have made marks in the sand throughout history. For some it is a meditative exercise. For most, it’s a way to get your name on a holiday beach. For Dubai-based Filipino artist Nathaniel Alapide, this is how he became a Guinness World Record holder.

Dubai’s 72 kilometers (45 miles) of sun-bleached coastline, and the vast Arabian desert, are its canvas. Using only a simple garden rake, each morning (after checking the weather, wind and tide reports) Alapide, 45, draws enormous calligraphic strokes across the beaches and deserts, rendering large and complex designs that are soon eroded by wind or waves are deleted.

“I really try to imagine the rake as a brush,” he said. “When you move it at a certain angle, it will give a different stroke, a thinner line.”

The average drawing for Alapide is about 20 meters (66 feet) square. “Sometimes I’ll do a job that will take an hour,” he said. “Or sometimes I work for hours every day to create.”

When he includes a written message, the pieces can be over 100 meters long.

Alapide’s sand art began in 2014, when he sketched a tree in tribute to his late grandmother in a stretch of sand on Umm Suqeim Beach, in the shadow of the iconic wave-shaped Jumeirah Beach Hotel.

The scale of the drawing impressed the hotel, which in 2015 offered him his first full-time job as a sand artist.

Since then, he has decorated the UAE’s sand with around 1,900 drawings. He has been commissioned by major brands such as Burberry and Adidas, and he created work for National Geographic for the series “The UAE from above.”

The UAE government even used Alapide’s work to turn the beach into a public service announcement to inform the public of Covid restrictions, with a giant slogan reading “#STAY HOME” visible from the air .

In 2022, Alapide set a new record for the world’s largest sand sculpture. The drawing, which is more than 23,000 square meters (250,000 square feet) in size, was commissioned by Abu Dhabi Aviation Club and showed the rulers of the United Arab Emirates (UAE). It took 30 days to create and required 12,000 tons of sand in four colors sourced from across the UAE desert.

Even though he has made a career out of the practice, Alapide says creating a work of art out of sand is not without its challenges.

“On the 20th day of creating the world record piece, we were almost 70% done, but then there was this weather that happened,” he said. “It was raining, and the wind was so strong, it almost wiped out the whole stretch.”

“I think that’s why I find this kind of work interesting,” he continued. “Because it’s short-lived, it’s fleeting. It’s like a ritual for me now, like the morning prayer. I work on something in the morning and by evening it’s washed away by the tide.”

Alapide says that the temporary nature of his work reminds him that everything is constantly changing, especially in a city like Dubai.

One of Alapide’s dramatic creations, against the coastline.

“When people see the sand art, they see both beauty and loss,” Alapide said. “Beauty in the work and then loss when it is washed away.”

“I think making sand art is a great way to connect with people,” he added. “I like to see how people interact with the work and I found that the children notice the drawings more than the adults. I think because they are more aware of their surroundings. For adults we can be blinded by our own lives and our busy days.”