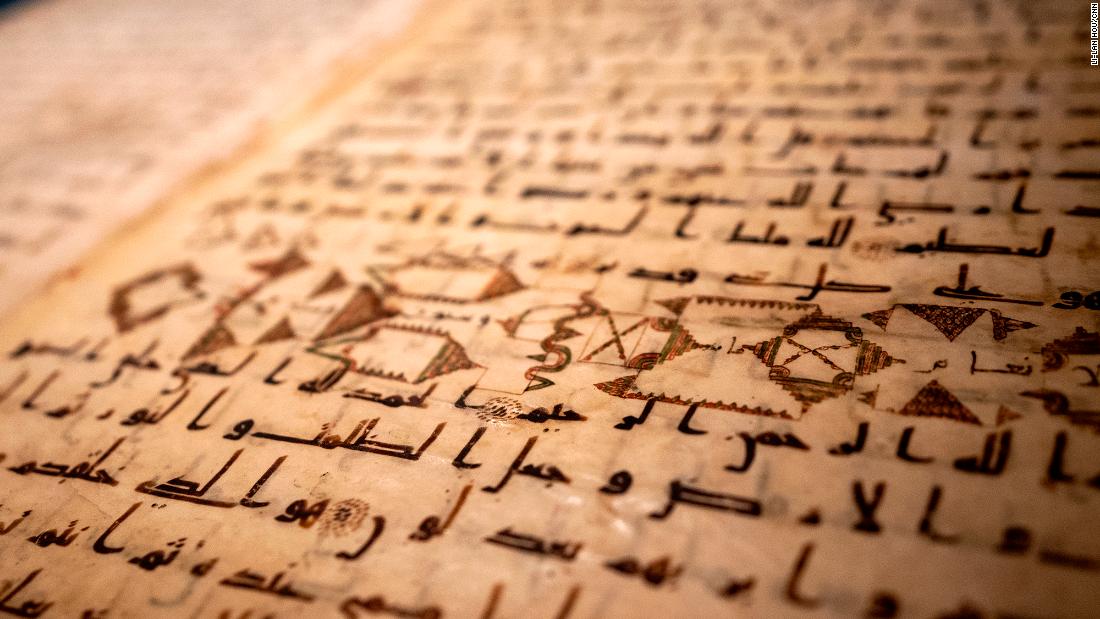 Pages from one of the oldest Korans in existence, and a painting described as Uzbekistan’s “Mona Lisa,” are among the historical treasures on display at a new exhibition at the Louvre museum in Paris.

“The Splendours of Uzbekistan’s Oases” features more than 170 works that offer a glimpse into the country’s past, including celebrated murals, Buddhist sculptures and everyday items belonging to ancient civilizations.

The exhibition is co-curated by archaeologist Rocco Rante, who has been excavating in Uzbekistan’s Bukhara oasis since 2009. The area was once a prominent stop on the Silk Road trade route that passed through present-day Uzbekistan hundreds of years ago, linking the Mediterranean with the Far East.

The star attraction is two pages from the Katta Langar Koran, one of the world’s oldest surviving Koranic manuscripts, dating from the early days of Islam. It was preserved for centuries in a mausoleum in a small village on a mountain top.

“With the help and support of our Uzbek colleagues, we have brought to light and restored one of the oldest Korans from the 8th century, which is a great discovery,” said Rante.

The Katta Langar Quran is considered to be one of the oldest surviving examples of the text. Credit: Li-Lan Hou/CNN

Created in partnership between the Louvre Museum and the Uzbekistan Art and Culture Development Foundation, the exhibition takes visitors on a political and historical journey of Uzbek life over 1,600 years, from the first century BC.

According to Yannick Lintz, co-curator and former director of Islamic Art at the Louvre, the Silk Road is at the heart of the exhibition, which highlights relics found along its caravan routes.

“Everyone knows those roads were for economic exchanges between east and west, but they were also intellectual, artistic and technological roads,” said Lintz.

Lintz hopes to transport people back in time with treasures from the eras of Alexander the Great, Genghis Khan and Amir Timur (aka Tamerlane), who founded a vast Central Asian empire in the 14th century.

“It was important for me to show the visitors that we can have cultural, religious and artistic dialogues in this part of the world between China, India and Iran, because Uzbekistan is in the middle,” added Lintz.

Together with experts from Uzbekistan, the Louvre carried out large-scale restoration works on many of the exhibits. Among the objects to be restored was the 14th-century Gūr-i Amīr door from Tamerlane’s mausoleum in Samarkand, a city in southeastern Uzbekistan.

“In the door we found large iconography representing the society of Samarkand. We found details in the center of the door where the divinity was sculpted. Around it you can see different figures offering something to this god,” said Rante.

Uzbek paintings have also been preserved, including monumental wall paintings from the princely residence of Varakhsha, dating back to the 4th century. Located in the northwest of the Bukhara oasis, the city of Varakhsha was once occupied by the Sogdians, an ancient people who lived on the Silk Road.

The 8th century “Painting of the Ambassadors” was rediscovered by chance in 1965. Credit: Li-Lan Hou/CNN

“The Ambassadors painting is a national treasure for the Uzbek people,” Lintz said. “What I call the Uzbek Mona.”

“The Splendours of Uzbekistan’s Oases” exhibition at the Louvre Museum Paris runs until March 6, 2023.

This mill house is renovated with warm neutrals and texture |