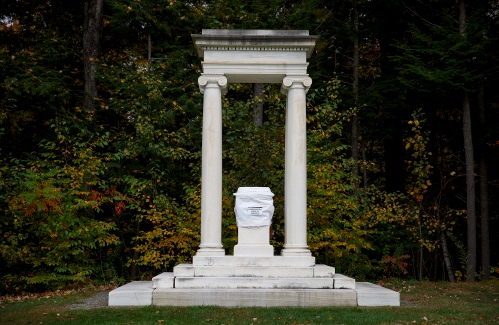 This summer, that same community is coming together for a picnic, concert and art exhibit with the themes of “Community and Tolerance.”

“We had a conversation about repairing the torn fabric of our community in response to the vandalism that happened,” said Rainey McKenna, program manager at both Saint-Gaudens and Marsh-Billings-Rockefeller National Historical Park in Woodstock. “It has really torn apart our community. You want to feel safe in your community.”

“We will restore the fabric of our community by creating a quilt together,” McKenna said.

People can also submit quilt blocks before the concert by bringing them to Saint-Gaudens, located at 139 Saint Gaudens Road. Any media can be used to create an image, as long as it is on an 8×8 square of watercolor paper or cardboard. Part of the quilt will be put together before the concert and it will be finished afterwards.

The person, or people, who committed the vandalism have not yet been found and the investigation remains open.

“A more wonderful response would be if the perpetrators of this were caught and prosecuted. That being said, we are left to counter the thoughts and ideals and the hatred they espouse,” Etkind said. “We say this is not acceptable. This is not the America we know or want.”

Since the vandalism occurred, Saint-Gaudens staff have reached out to members of the Upper Valley’s Jewish community. During May, which is Jewish Heritage Month, Saint-Gaudens hosted an exhibition featuring Jewish sculptors, as well as Jewish members of the Cornish Art Colony. McKenna said she expects the partnerships to continue beyond this year.