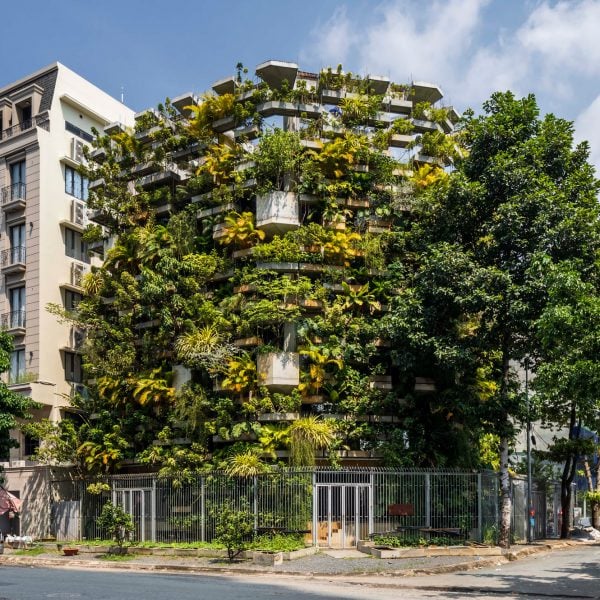 Located on a corner site in the city’s Thu Duc district, the Urban Farming Office is designed to be emblematic of the plant-filled, low-energy architecture that Vo Trong Nghia Architects is known for.

Next to the office, the practice also built a version of its low-cost housing prototype, S House, which was designed to withstand typhoons and earthquakes and was first unveiled in 2012.

“Under rapid urbanization, cities in Vietnam have diverged far from their origins as vast tropical forests,” explains the practice. “The lack of greenery causes various social problems such as air pollution, floods and the heat island effect.”

“In this context, new generations in urban areas lose their connection with nature, [and] increasing droughts, floods and salinization are putting food supplies at risk,” it continued.

The core of the office building is constructed with an exposed concrete frame, while the planters themselves are supported by a shelf-like external structure of thin steel, allowing them to be flexibly rearranged as plants grow or replaced entirely.

The wall of plants, which completely covers the building’s glazed southern side, filters sunlight and air, prevents overheating and creates a shaded microclimate for the office interiors.

Inside, workspaces are organized around a central atrium, and full-height sliding glass doors provide access to balcony areas for moving or harvesting the planters, with a roof garden providing further space for growing plants. 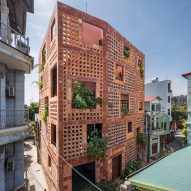 “Together with the roof garden and soil, the system provides up to 190 percent of green ratio to the site area, which is equivalent to 1.1 tons of harvest,” explains the practice.

“[The vegetation] is irrigated with collected rainwater, while evaporation cools the air,” it continued.

The concrete structure has been left completely exposed internally, complemented with dark wood furniture and minimalist light fixtures to provide a contrast to the bright green of the planted facade.

To allow the office areas to be as open as possible, the elevator and stairwell were moved to the northern corner of the building, where brick walls with small openings for ventilation were left bare to allow for the possibility of future rear extensions.

Architect Vo Trong Nghia founded his eponymous practice in 2006, and it has since become known for its explorations of low-energy architecture, often incorporating plants and bamboo into its designs.

Other projects recently completed by the studio include a bamboo welcome center for a resort on the island of Phu Quoc, and a house in Bat Trang wrapped by a perforated brick wall and a series of elevated garden spaces.

The photography is by Hiroyuki Oki.