“What Would The Simpsons’ Home Look Like If They Were To Relocate To The UK?”: 8 British Home Styles 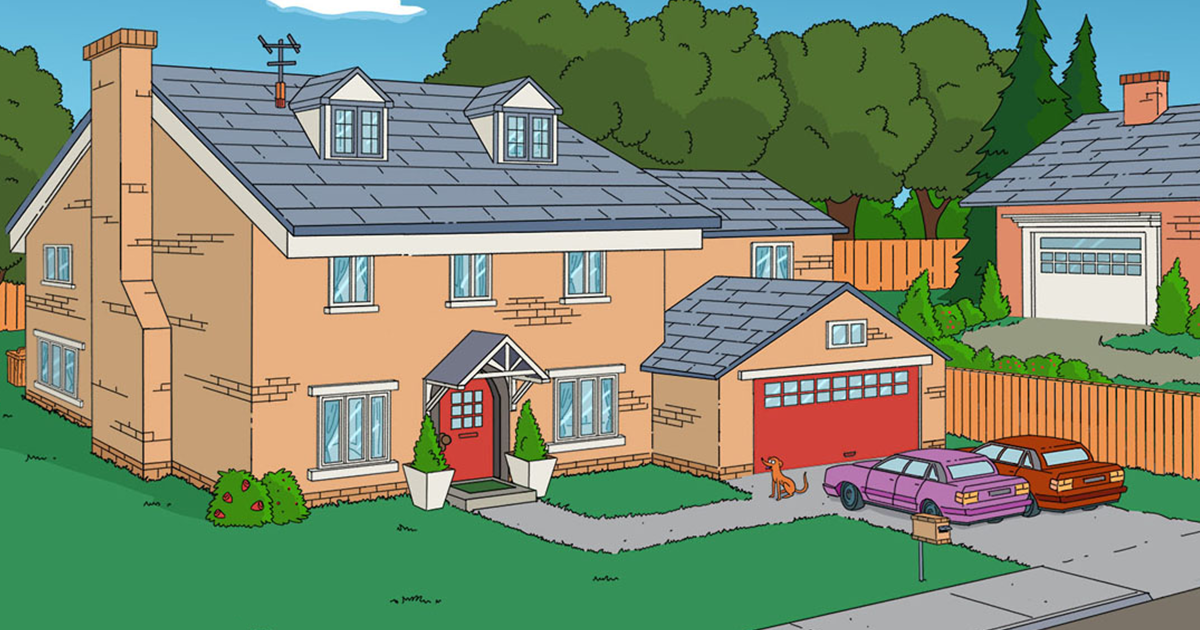 There is probably no place on earth that does not know The Simpsons and their iconic home at Springfield’s 742 Evergreen Terrace. With its large garage, basement, attic and large garden, the fictional family home has become a symbol of American suburban architecture. Interestingly, the house has barely changed since its first broadcast in 1989 and is an inspiration to many designers and architects to this day.

HouseholdQuotes got curious about what the Simpsons’ home would look like if they moved to the UK. So they decided to redesign it into eight British housing styles. Scroll down to see the result!

“From the time of Henry VII to the reign of Elizabeth I, the Tudor period was a time of massive change and social improvement in Britain. While the wealthy lived in mansions built of stone and glass and the poorest lived in mud and straw houses, the Homers of the time would enjoy ‘half-timbered’ houses: sturdy wooden frames paneled with wattle and daub.

Waffle and what-now? Wattle and daub (the white bits) is a composite of wood, reed-like strips and clay or soil, flexible and good for insulation. If the Simpsons could afford glass windows (rather than cloth or paper), they would be made of small diamond panels, with bars for strength and decoration. Of course there would absolutely not be a television antenna on the roof.” 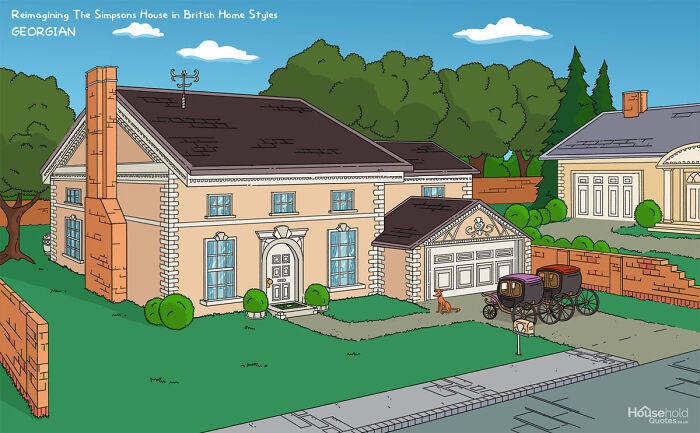 “For a while back, Britain had the habit of calling all its kings “George”. As each George revived in the next, the discovery of Ancient Greek buildings on the other side of Europe had an effect on architecture, with British designers borrowing the classical principles of balance and symmetry for homeowner themes from the various Georges. .

Stone was more elegant than brick, so architects would add a touch of distinction to Georgian brick houses by adding decorative stone ‘quoins’ along the corner edges. The fancy molding around the roof is teeth, which is another Ancient Greek throwback and will definitely turn into teeth and try to eat Bart in a future Georgian themed segment of Treehouse of Horror. 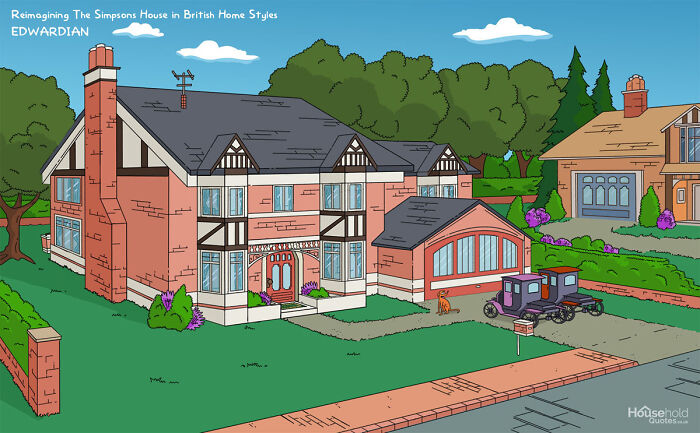 “Named after only one Edward (the seventh), the Edwardian period spanned a single, relatively mild decade after the death of Queen Victoria in 1901. It ushered in a less conservative architecture, borrowing from 18th-century French and 17th-century English Baroque styles – made more eclectic with influences from the fresher Art Nouveau, Japanese and Arts and Crafts styles.

Edwardian architecture arose during a housing boom and suburban expansion, making an Edwardian home a perfect choice for the textbook suburban Simpson family, even today. Wooden railings and fretwork across the porch are an affordable way to add class and personality to their home. Projecting windows and bays flood the rooms with natural light and add scale – and also make it easier to spot that baby with the one eyebrow rolling by outside.” 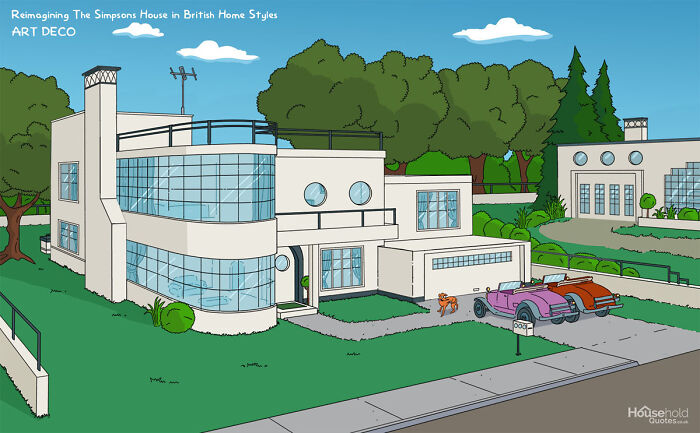 “Architects faced forward during Britain’s Roaring Twenties, giving higher budget projects the very modern concrete and steel treatment. Encouraged by the progress of the industrial age, they experimented with a wider range of bold or curvilinear geometries and the exotic influence of jazz-age America.

Although the style is a bit off-putting to the Simpsons family – and indeed, to most British families – there’s certainly a place in the extended Simpsons universe for an episode in which Homer is a ruthless inter-war Fleet Street- become a newspaper magnate. Its typically flat roof is made for champagne receptions (rain permitting), and the round windows and opaque glass openings on the garage add style and privacy.” 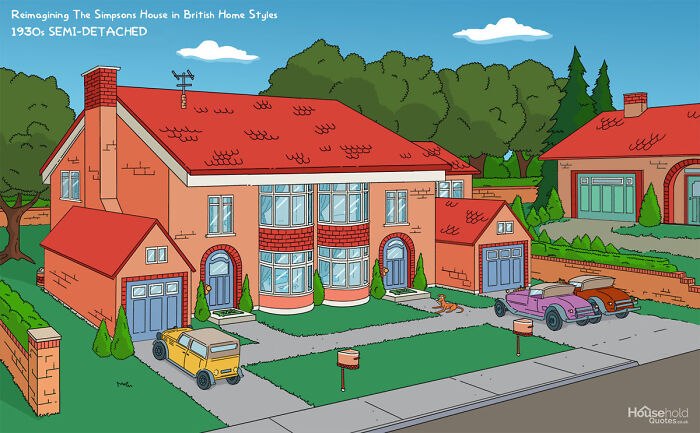 “The Flanders get a little too close for comfort in this semi-detached version of the Simpsons house (and its immediate neighbor). Yet this is the way much of suburban Britain still lives today, with a shared wall in the middle and a single roof sloping from the center to each outer wall of two adjacent houses.

The curved bay windows emphasize the risk of accidentally making eye contact with a neighbor. The tiling in the space between the upper and lower bays is designed for decoration and to protect the lower window from the elements. However, it also makes it much more dangerous for Bart to escape through the top window.” 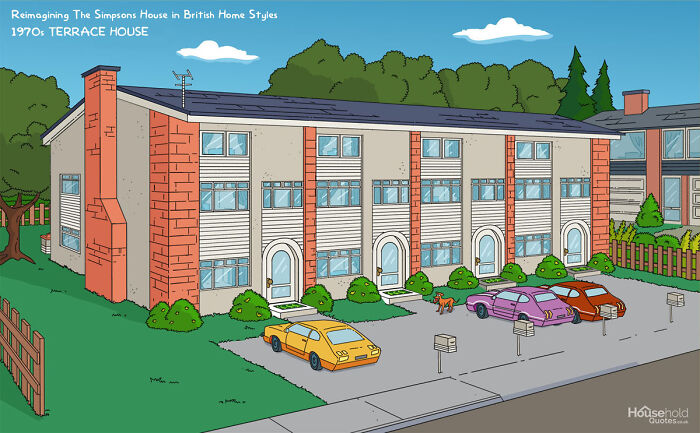 “Terrace houses of this type became a popular and affordable alternative to high-rise residential buildings in the 1960s and ’70s. With post-war norms like central heating (smell you later, chimney stacks!) and garages, the two- or three-story narrow terrace gave buyers a taste of space-age comfort and delivered some of the optimism of the period.

As with the semi-detached option, the Simpson family will find themselves shoulder to shoulder with the Flanders clan in this terraced row. The house on the other side of the Simpsons residence is traditionally reserved for single-episode characters, such as Bart’s teenage crush Laura Powers and Devil Donuts salesman Terrence.” 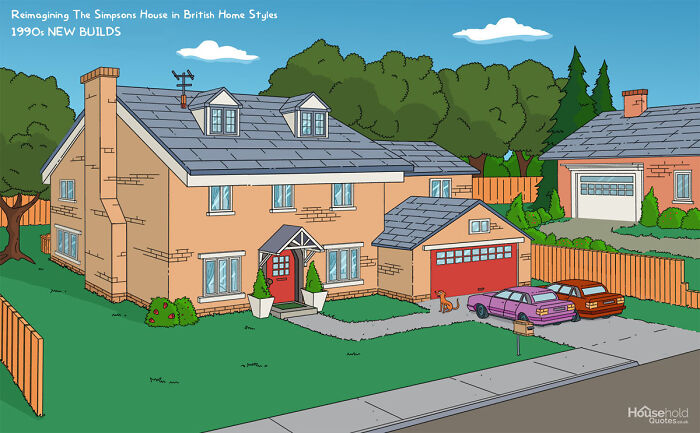 “The ’90s new build was an attempt to return to the traditional look of British housing. Any combination of red brick, faux timber frames and latticed windows can make British buyers salivate for your old town feel. Indeed, these new buildings sprang up in their dozens in staggered rows to create the spacious, patchwork feel of the organic country village.

This generic approach neatly transposes the Simpsons ‘average American’ aesthetic to the British Isles. Spacious double-glazed windows retain the heat, reducing the energy pressure on the local nuclear power plant. And that steep roof leaves plenty of room for an aspirational loft conversion – perfect for when Artie Ziff comes to stay.” 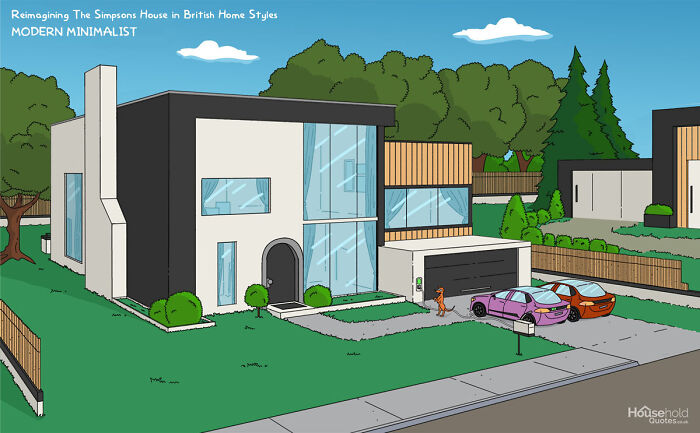 “The minimalist house has a special place in the UK’s long-established towns and suburbs: it stands out. Planted between terraces on the footprint of World War II bomb sites or among other strange designs on those mysterious unpaved private roads that hide every city, a minimalist house is a British way of saying: ‘I have good taste, and I give not because of who hears me shouting it.’

Large, oddly placed windows; shoe box corners; bold and simple use of materials; large, featureless front doors: somewhat counterintuitive, minimalist housing is full of character and would only make a good fit for the normcore Simpsons if they had a good one-episode reason to move there. Maybe when Lisa forces the whole family to move to London so she can study architecture?”