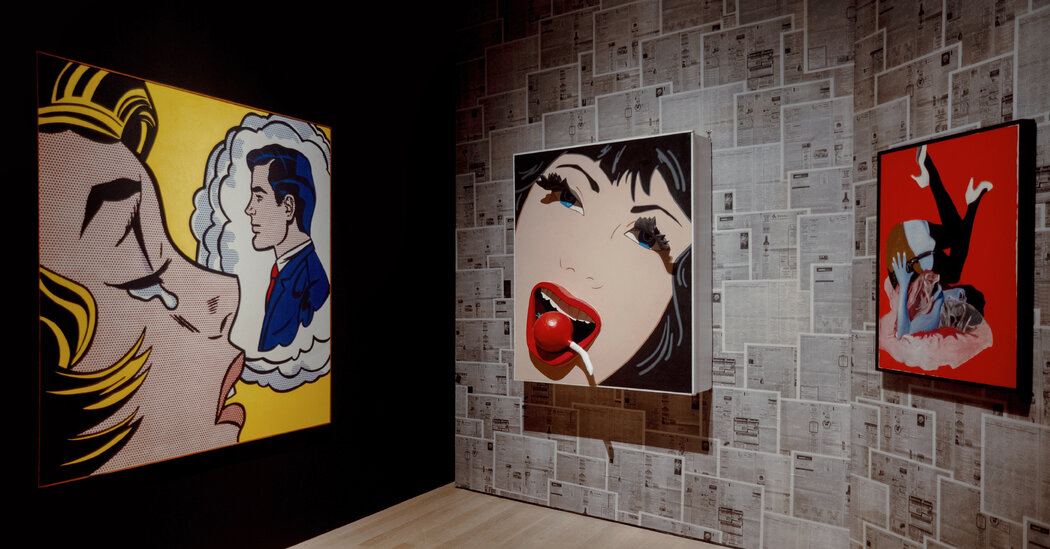 When I was a kid in the early 1960s, Republican doctor Eisenhower’s father always kept the latest version of his favorite subscription publication on his home office desk. Time, Life, Journal of the American Medical Association, Mad Magazine.

For me, Time and Life nailed him to an engaged citizen. JAMA as a conscientious professional. But mad? With that Alfred E. Neuman mascot and the humor that distorts the chaotic and sacred cow? It signaled other types of readers who prefer cultural strangeness similar to what I was developing.

Its taste went through the early 1960s, the Cold War and Vietnam, the civil rights and Black Power, the era of manic between oppression and liberation, and the moment of hinges. Beatnik and hippies. Ab-Ex and Pop. This was a time recorded at a smart split-level show called “New York: 1962-1964” at the Jewish Museum. This institution has been found to have played an important role in cultural change.

This study of nearly 300 understated works of art and Ephemera by Seldorf Architects begins by slamming us in a mural-sized photo of walking traffic on West 8th Street in Greenwich Village, in the middle of downtown Manhattan. .. With a neon liquor store sign overhead and an urban silence soundtrack, you can always enjoy the classic New York City scene.

A selection of shots by pavement wanderers in the early 60’s, the first gallery to be time-specific. Diane Arbus on the city’s waterfront, Louverstein in Bowery, Leonard Freed in Harlem, Fred Kelly on the subway, Central Park Zoo. There’s also a soundtrack here, emanating from a vintage jukebox featuring a selection of period cuts. This was the first moment of pop music. Bob Dylan, Chubby Checker, John Coltrane, The Shangri-Las.

In the center of the gallery is a thin, sloping scarecrow of sculptures made from construction site scraps by an artist in his twenties, Mark di Suvero. The wall behind it is adorned with a surreal close-up painting of a single staring eye by Harold Stephenson. A nearby shrine-like niche surrounds a rough hand-molded plaster and paint relief of feminine underwear by young Claes Oldenburg.

All three artists were active outside the world of Ab-Ex. Stephenson (1929-2018) was a friend of another young realist, Andy Warhol, and was an early factory habit. Oldenberg, who died at the age of 93 this month, was taking images of shoes, sandwiches, road signs, etc. from a neighborhood in East Village. Part of a new generation of lofts, Di Svero lived far downtown in the Wall Street area and searched the streets at night looking for material.

And not far from his South Street Seaport Studios in Coenties Slip was a small community of artists who, for both financial needs and self-definition, distanced themselves from the arts facility. These outliers included Robert Indiana, Ellsworth Kelly, Agnes Martin, James Rosenquist, and Lenoir Tony, forming a nearby community of Jasper Johns and Robert Rauschenberg. Johns and Rauschenberg all participate extensively in the show. And they were all different from each other, as was the predominant style of the time.

It wasn’t long before the Jewish Museum led an institutional group and Uptown began to knock. The new director, Alan Solomon, arrived in 1962 and decided to make it a groundbreaking museum to showcase what he calls “new art.” He didn’t waste a minute.

In 1963 he made his first retrospective exhibition in Rauschenberg. The following year he did the same for Jasper Johns. Also in 1964, commissioned by the US government, he brought a large group show of young American artists to the Venice Biennale, recording a hit that upsets the power balance of the art world from Europe to New York.

The Jewish Museum could have easily packaged “New York: 1962-1964” as a small, tight institutional story. Instead, it makes the story part of a much larger one and has a broader perspective credited to its former organizer, the Italian curator Germano Celant, who died of Covid’s complications in 2020. The studio and the Jewish Museum team, which includes director Claudia Gould, chief curator Darcy Alexander, associate curator Sam Saccarov, and curator assistant Christina Parsons.

Greater history, interdisciplinary, and much of it is political grassroots, chronologically unfolding on the second floor of the show. In 1962, the Cuban Missile Crisis and Marilyn Monroe’s suicide shook the country in different ways and to varying degrees. The March on Washington in 1963 was a tumultuous moment. The show brought it to the forefront of the civil rights movement itself, which received widespread attention through archives and works produced by artists and groups — the Spiral Group, the Camoinge Workshop — inspired by the movement.

Then, just a few months later, the country experienced a head-on mental crash in the assassination of John F. Kennedy. And here, the popular pre-digital press has become the main expressive voice on the gallery display of newspapers, magazine covers, and video clips of the broadcast announcement of Walter Cronkite’s choked president’s death. increase.

Throughout all of that, much of Solomon’s “new art” was at work, leading to the national mood of mania. The show ends with a loud shout to the curator through the record of the victory of the Venice Biennale in 1964, when Rauschenberg became the first American to win the Golden Lion, the highest award in painting. In fact, in the context of “New York: 1962-1964”, the Venetian event feels anti-climax. The boldness of many arts before that, and the political issues that this work brings to the fore, make you look and think.

Solomon’s Venice group show was aimed at “impressing Europeans with the diversity of American art,” but there were no women, but Cherant includes a few. The materially abundant crowds of Nancy Grossman and Carolee Schneemann seen here are more interesting to see and think than almost anything around them. (Schneeman had to wait decades for his Venetian moment. She won the Biennale Golden Lion in 2017 for her lifetime achievements.)

And the most dynamic pop image, especially at the exhibition, which can be considered a mini-survey of the rise of pop art, is the big and bold “radish girl” of Marjorie Strider. Relief painting first appeared in the 1964 pace gallery exhibition “The First International Girlie Show”. The exhibition was created by only two women, Strider and Rosalyn Drexler, out of ten artists, in line with the distorted irony that has always shaped the market. .. (Clearly intended to correct this balance, Celant has Drexler’s work, antique self-portraits, and in other sections of the show, Lee Bonteku, Chrissa, Sally Hayeslet Dramondo, Martha Edelheit, May. Includes works by Stevens and Marisol Escobar.)

Last but not least, the pre-Stonewall era, where museums rarely go, could be beaten, arrested, or killed if they had non-heterosexual sex. The world of “new art” was densely populated with gay men. Evidence can be found here in the Coenties Slip crowd, Johns and Rauschenberg, Stevenson, and of course Warhol. John Cage and Merce Cunningham count in a section of the show dedicated to experimental dance, as well as like John Ashbery and Frank O’Hara singing from avant-garde poetry recordings. I can.

And then there’s the great Jack Smith and his movie “Flaming Creatures” (1963). There, swarms of non-binary bodies, some dressed and some undressed, roll wildly and swirl in the music of the top 40 radio hits. It’s a pure and nifty poem. And when it was screened in March 1964, filmmaker and critic Jonas Mekas desperately tried to get rid of it, ahead of the World’s Fair, which is one of the most enlightening pastimes. When I was there, I was withdrawn for obscene charges. , Michelangelo’s respected “Pieta” imported from the Vatican.

Michelangelo. Jack Smith. Quire body. “Pieta.” New York art in the early 1960s created a bold mix. Culturally, we sat on the edge of something and leaned forward. Then, a quick flip through the show’s catalog shows a three-year timeline edited by Celant and designed by Michael Rock, giving you a bigger, national, global, wobbling sensation.

This is a shot of Jacqueline Kennedy, who leads the White House tour on television, and George Corley Wallace, a separatist who is blocking admission to the University of Alabama. There is Martin Luther King, Jr. talking about civil rights with Lyndon Johnson in the Oval Office. And then there is the monk Thich Quang Duc, who self-burns in Saigon to protest the American intervention in South Vietnam. This is a studio shot of the TV family “Leave It to Beaver”. This is a blurry clip of two guys kissing in Warhol’s movie.

Most of these images appeared in popular magazines at once. I don’t know that my dad might have come across them in his time or life. But his dedication to Mad makes perfect sense.