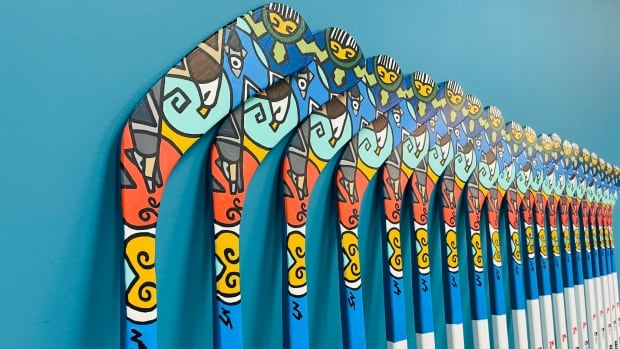 Four artists have piled in hundreds of hours of work over the past month, all in an effort to showcase their art at this year’s World Junior Hockey Championships in Halifax and Moncton.

Lorne Julien of Millbrook First Nation, 61 kilometers north of Halifax, wanted to honor his family’s connection to Mi’kmaq hockey sticks. The Mi’kmaw are believed to have made the first modern hockey sticks.

Julien’s research shows his great-grandfather, Joseph Julien, once worked as part of a collective in the early 1900s to fill an order of 12,000 hockey sticks for Eaton’s.

Now he hopes his family’s story will continue when one of his sticks is presented to a “player of the game” winner.

“It feels great because these sticks will be cherished forever,” said Julien.

Between Monday and January 5, 2023, teams from around the world will play in 31 matches in the 2023 International Ice Hockey World Junior Championships. A player from each team will earn “player of the game” recognition and take home an award package – including a hand-painted stick.

Each stick has Wabanaki motifs, eagle depictions and each shares a different story. Julien and three other artists from Atlantic Canada were selected to create the awards.

Emma Hassencahl-Perley, a Wolastoqey artist from Neqotkuk, Tobique First Nation 123 kilometers northwest of Fredericton, said her design honors birch bark art from the region, something she is proud to take to the world stage.

“Our art should be everywhere,” Hassencahl-Perley, 27, said. “It’s a reflection of who we are, it’s where we come from, it’s our visual language and it’s deserved.”

The Wabanaki Confederacy consists of the Wolastoqey, Mi’kmaq, Abenaki, Peskotomuktahi, and Penosbcot.

She said in the world of Indigenous art, work from Atlantic Canada is sometimes lost. But the international tournament offers a chance for the whole world to appreciate the designs.

Hassencahl-Perley said the moment one of those players receives a trophy designed by her, she will feel happy.

“It’s like an honor for me at the same time that they receive an honor for their dedication and for achieving their goals,” Hassencahl-Perley said.

She said the artists had a week after being selected to paint 20 sticks each and she worked between 10 and 15 hours a day to complete her work.

Finishing them, she said, was a testament to her dedication.

“I’m so proud of how far I’ve been able to get with my artwork, I didn’t think I’d be doing something like this,” said Paul (40).

Paul’s sons played hockey and the sport was a good way to bring her family together. Seeing the World Junior Hockey Championships take a moment to showcase indigenous talent filled her with pride.

“To have a focus on local indigenous communities is just a great honour,” said Paul.

For Natalie Sappier, a Wolastoqey artist also from Neqotkuk, painting the sticks was a way to honor her family who played hockey.

“I think of hockey as a community, when we get together, there is always laughter and it symbolizes just as much,” says Sappier (40).

She said being selected filled her with joy and pride, but she is also grateful for the chance to make her community proud.

“I paint for my people, I paint for our land and our water,” Sappier said

They were initially looking for one Mi’kmaw artist and one Wolastoqey artist, but the board of directors accepted all four applications they received based on the talent they saw.

Grant MacDonald, 2023 IIHF local event leader, said the inclusion of Indigenous talent and stories was part of the local bid offer to host the games.

He said the IIHF wants to remind people of the Mi’kmaw’s connection to the sport.

“We want to educate and we want people to understand that this sport does have some unique roots in this part of the world,” MacDonald said.

A Vintage IKEA Dresser Was the Heart of This Amsterdam Home