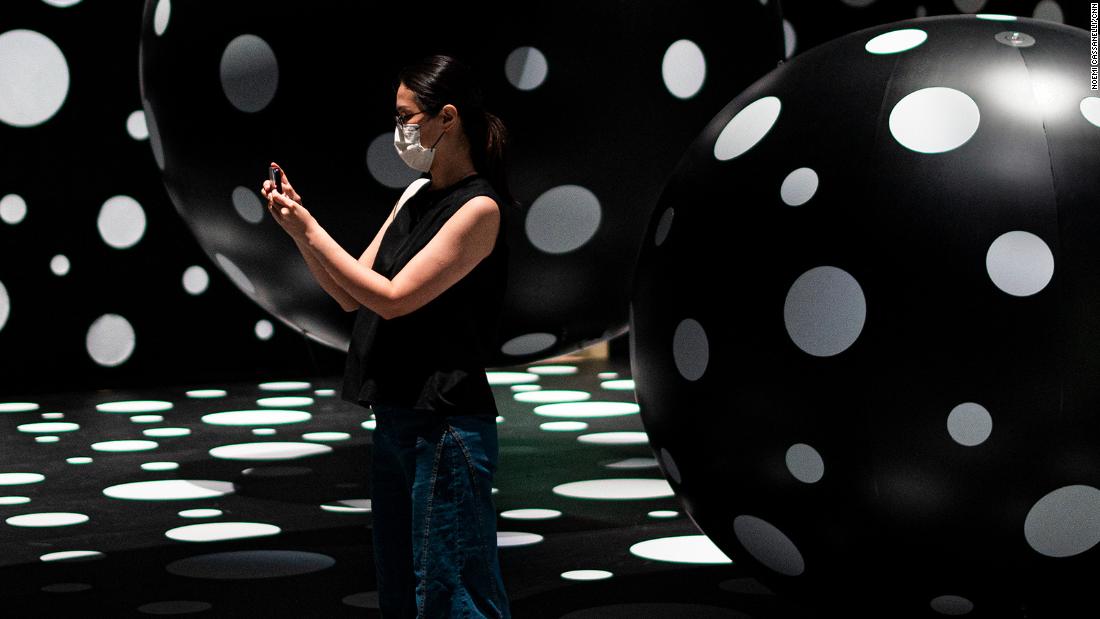 CNN International will broadcast an inside look at the Yayoi Kusama show on December 31 as part of its New Year’s Eve Live special.

Advanced age and the pandemic have done little to deter Japan’s Yayoi Kusama. At 93, the world’s best-selling living female artist still paints daily at the psychiatric hospital she voluntarily checked into and has lived in since the 1970s.

Some of her latest creations appear alongside early drawings in a new exhibition at Hong Kong’s M+ museum. Bringing together more than 200 works, “Yayoi Kusama: 1945 to Now” spans seven decades as the largest retrospective of her art in Asia outside of her home country.

Kusama’s success has soared in the past decade, best known for her signature pumpkin sculptures and stipple paintings, which can fetch millions of dollars at auction. The most photogenic parts of her oeuvre — including her immersive “Infinity Mirror Room” installations, for which tickets have sold out at museums around the world — have achieved mainstream appeal in the age of social media.

Needless to say, her new Hong Kong exhibition is filled with Instagram-friendly moments. But the museum’s deputy director, Doryun Chong, who co-curated the show, says he hopes visitors take the opportunity to dive deeper.

“Kusama is so much more than pumpkin images and dotted patterns,” he explained. “She is a thinker of deep philosophy – a groundbreaking figure who really revealed so much about herself, her vulnerability (and) her struggle as the source of inspiration for her art.”

Arranged chronologically and thematically, the show explores concepts that Kusama has revisited across various mediums over the course of her career. For example, the idea of ​​infinity appears in the form of recurring motifs inspired by the vivid hallucinations experienced in childhood, when she would see everything around her consumed by seemingly endless patterns.

Visitors get a sense of how these forms evolved, starting in a room filled with her “Infinity Net” paintings – including a breakthrough work she created after seeing the Pacific Ocean for the very first time from an airplane window She then came to the US from Japan in 1957.

These nets reappear in “Self-Obliteration,” an installation created between 1966 and 1974, a period after Kusama established herself in New York’s male-dominated art world despite the discrimination she faced as a woman , and a Japanese one at that. (She believed that male peers such as Andy Warhol copied her ideas without credit). Consisting of six mannequins positioned around a dining table, every inch of the sculpture – from the human figures to the furniture and cutlery – is covered in tiny looping brushstrokes.

“Self-Obliteration” is part of the M+ collection. Scroll through to see more works on display at the new retrospective “Yayoi Kusama: 1945 to Now.” Credit: Noemi Cassanelli/CNN

The motif later resurfaces with bold, vivid effect, filling the bodies of amoeba-like forms in selected works from “My Eternal Soul,” a hundreds-strong series of acrylic paintings she began in 2009 and completed last year. They appear in the retrospective’s colorful “Force of Life” section, which immediately follows one titled “Death,” a contrast that speaks both to the dichotomy of Kusama’s work and the internal struggle that underlies it.

“These days we are very used to (people) talking about their mental health challenges, but it was 60 to 70 years ago that she started doing that,” Chong said. “It really runs throughout her life and career, but it never really stays in a dark place. She always proves that by talking about death and even her suicidal thoughts and illness, she reaffirms and recreates her will to live. “

Elsewhere, the exhibition features lesser-known pieces from the artist’s repertoire, shining a light on what created her mid-career, when she returned to Japan depressed and disillusioned. Among them is a black and white stuffed fabric sculpture from 1976 called “Death of a Nerve.”

Although it is less well known, the curators of the exhibition consider “Death of a Nerve” to be a key piece. It was made in 1976, the year before she voluntarily checked herself into a psychiatric hospital. Credit: Noemi Cassanelli/CNN

A 2022 version of the artwork, created for M+ and slightly renamed “Death of Nerves,” is also on display. Realized on a much larger scale and rendered in color, it embodies a sense of resilience and even optimism in contrast to the original. An accompanying poem admits that her nerves were left “dead and shredded” after a suicide attempt. After a while, however, a “universal love” “began to flow through my whole body,” she wrote; the revived nerves “burst forth in beautiful vivid colors . . . stretching into the infinity of eternity.”

“Death of Nerves” can be seen from several levels of the museum. Credit: Noemi Cassanelli/CNN

“This is an unusual piece for Kusama because most people associate her with the pumpkins, or the mirror rooms, or with more Pop forms, but this is a very soft sculpture that she has always worked on, from the beginning ,” Mika Yoshitake explained. , an independent curator who worked with Chong on the M+ show, as well as previous Kusama shows at the Hirshhorn Museum in Washington, DC and the New York Botanical Garden.

“I think she’s amazing to be able to sustain her strength through art,” added Yoshitake, who last saw Kusama in 2018, before the pandemic. “She is determined to have her story told.”

Small in comparison is a group of 11 paintings the artist began in 2021 and completed this summer called “Every Day I Pray for Love.”

“She’s always said ‘love forever,'” Yoshitake said. She wants people to be at peace, and have this warmth and care for each other. There’s so much strife and war, terrorism, a lot of things that she world view, especially through this pandemic.”

In a brief email interview with CNN, Kusama explained her dedication to her art.

“I paint every day,” she said. “I will continue to create a world in awe of life and embrace all the messages of love, peace and the universe.”

Since her teenage years, Kusama has read Chinese poetry and literature “with deep respect,” she said. As such, she added, she is “happy” to see her work in Hong Kong.

According to M+, the exhibition has now been described as “the most comprehensive retrospective of the artist’s work to date,” by curator and critic Akira Tatehata, who serves as director of the Yayoi Kusama Museum in Tokyo. Tatehata, who visited the museum in November, has long supported the artist, commissioning her solo show of Japan at the 1993 Venice Biennale.

The flashback also carries special meaning for M+, which used the show to celebrate its one-year anniversary.

Since its conception more than a decade ago, the museum has been touted as Asia’s answer to London’s Tate Modern or New York’s Museum of Modern Art. When it finally opened last year, it faced unique challenges, from Hong Kong’s changing political environment, which continues to raise concerns about censorship across sectors including the arts, to pandemic restrictions that closed the museum for three months and, until recently, the barred most international visitors. from the city. But Chong sees the latter, at least, as “a blessing in disguise.”

“For a global museum to be opened in the first place in its first year and embraced by our local audiences, there could not have been a better way to start the museum,” he said.

Welcoming its 2 millionth visitor, M+ hopes that eased Covid restrictions will allow more people from abroad to see its vast collection, which includes the largest collection of Chinese contemporary art, and the Kusama exhibition, which runs until May .

“(Kusama is) living proof that art is indeed therapy and has a powerful healing power,” Chong said. “And that’s such an important lesson, especially for us during this period of post-pandemic.”

This traditional Aluva house is classy in design, pocket-friendly on budget | Lifestyle Decor