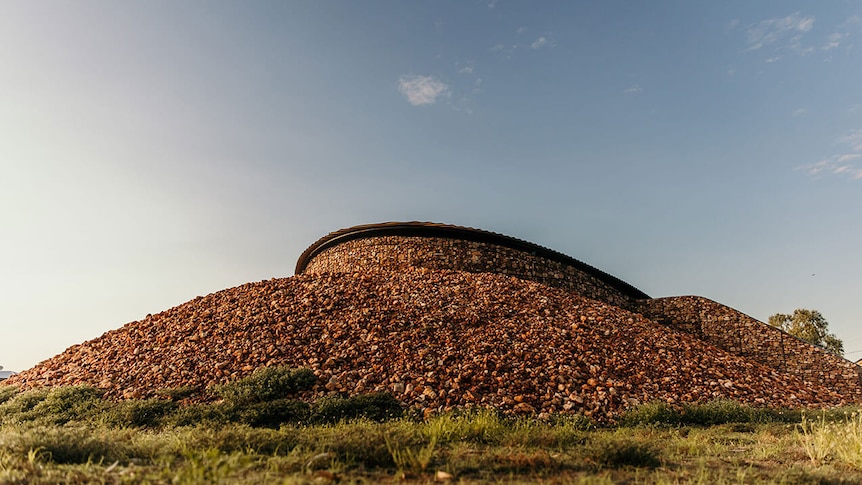 More than a decade ago, a small outback Queensland community with a population of less than 100 approached a Yeppoon architect to design a local dinosaur attraction.

In the geographic center of Queensland, Brian Hooper saw a unique opportunity to create something not only eye-catching but also environmentally sustainable that would stand the test of time in a harsh environment.

The Muttaburrasaurus Interpretive Center opened almost a year ago and Mr Hooper won a 2022 Queensland Architecture Award for the design.

“I don’t know of anything like it in the world,” Mr Hooper said.

“This particular project is unique… the building itself is basically net zero [emissions] over its lifetime because it is maintenance free.”

The passionate community of Muttaburra helped build the center from locally sourced rock.

It contains a model of the Muttaburrasaurus Langdon dinosaur, discovered in 1963 by Doug Langdon while collecting.

Muttaburra Community Development Association member Kerry Robinson said the years of planning for the project, paid for with grants and assistance from Barcaldine Regional Council, had been worthwhile.

“It’s just amazing – everyone comments on it because it’s so unique,” she said.

“Architects came out to our Muttaburra stock show this year and they were just as impressed – it’s now getting a name out there.

“You wouldn’t expect that in the middle of Queensland.”

Australian Institute of Architects (AIA) said the center was worthy of the award because of its sustainable design, use of natural light and ventilation and passive thermal control.

“It creates its own microclimate, even in an extremely hot, dry environment,” it said.

“If you’re generating more power than you’re actually using, then you’re going to have a net zero energy building,” he said.

He said there had been a major shift in the sector as the focus turned to sustainability.

“People with rising energy costs are realizing that trying to lower the energy costs of your building is going to be financially beneficial and also benefit the environment,” Mr Ambrose said.

“Especially with its building with natural ventilation, lighting, and the earth being exposed to create thermal mass, it punches above its weight in terms of getting that message across,” she said.

Ms Degenhart said near-net-zero designs were becoming more common, but there was still room for improvement.

“One item that isn’t talked about very often is the embodied energy in materials — with transportation costs, we have a lot of that,” she said.

“And then the making [of materials]so when you make some aluminum it costs a lot more in terms of the heat than if you use a reusable wood.”

Mr Ambrose said the tourism and commercial sectors were “leading the charge” with sustainable building.

“They tended to be ahead of the residential market,” he said.

“Especially buildings that are in tourism locations have strived to show their environmental credentials.”

However, Mr Ambrose said it was difficult for some commercial buildings to become net zero.

“Especially in office buildings it can be very difficult. If you can’t put a whole bunch of solar panels on top of the roof, you have a very small roof footprint at your disposal,” he said.

“Those buildings are going to struggle to achieve that net zero energy outlook.

Changes to the national construction code will come into effect from October next year, meaning new homes built in Queensland must meet a seven-star energy efficiency rating.

Local news straight to your inbox

ABC Capricornia will deliver a cover of the week’s news, stories and photos every Friday. Sign up here